The advertisement:
Private lessons in
mathematics and physics
for students and pupils gives
thoroughly
Albert Einstein, owner of the
Swiss polyt. subject teacher diploma,
Gerechtigkeitsgasse 32, 1. floor.
Trial lessons for free.
So ran the ad and a response was made: Maurice Solovine...philosopher wishing to learn about science. The triumvirate [including Einstein's roommate Conrad Habicht] initiated the formation of "Akademie Olympia". 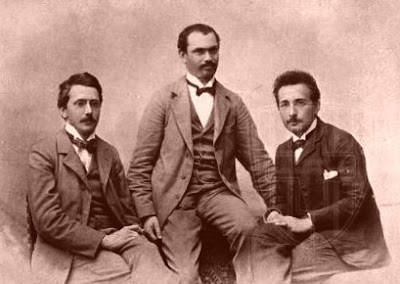 Einstein wanted the meetings to begin with a joint evening dinner. As the three of them had only few money the meal was Spartan, but this had no influence on the good mood. After dinner they read and debated about their actual work. Therefore it could happen that they read only one page or even less on one evening but this page was then discussed in much more detail and sometimes for several days. So it was the rule that the reading of a work could last weeks, or even months. Together they read and debated Ernst Mach's Analyse der Empfindungen (Analysis of the Sensations) and Die Mechanik in ihrer Entwicklung (Mechanics and its development), Karl Pearson’s Grammatik der Wissenschaft (Grammar of Science), Henri Poincarés Wissenschaft und Hypothese (Science and Hypothesis), John Stuart Mill’s Logik (Logic), David Hume's Traktat über die menschliche Natur (Treatise of Human Nature) and Spinoza’s Ethik (Ethics) - to only mention a few. Of course they debated also Einstein's works lively. But also belles-lettres was read, such as Don Quijote by Cervantes Saavedra. Apart from all the work pleasure wasn’t lost out and from time to time Einstein enriched the meetings with a little violin concert.

But in the "Akademie" a severe discipline was demanded. Thus it happened that Solovine stayed away from a meeting to listen to a concert in the city. But he had prepared a meal for the friends and had left a note: "Amicis carissimis ova dura et salutem." (To the beloved friends hard-boiled eggs and greetings). But he had to pay hard for his skipping the meeting. As the meeting was to take place at his house this evening Einstein and Habicht turned his flat upside down after they had eaten the meal prepared by Solovine. Thus no piece of furniture stayed in its pace. Plates, cups, forks, knifes and books were scattered all over the flat and last but not least the rooms were covered in smoke by Einstein’s pipe and Habicht’s cigar. Before the two men left the flat they fixed a "worthy warning" on the wall. There you could read: "Amico carissimo fumum spissum et salutem." (To the dearest friend thick smoke and greetings). On the next evening Einstein is said to have greeted Solovine loudly with the following words: "You lousy guy, how, you were cheeky enough to stay away from a meeting of the Akademie to listen to the violin? Barbarian, idiot, stupid one, if you ever let us down this way again you’ll be expelled from the Akademie with shame." The following meeting lasted until the morning because the time lost had to be made up for.

Later the brother of Conrad Habicht, Paul (1884-1948) and Lucien Chavan (1868-1942) who worked as technician for the Swiss post and telegraph office took sporadically part in the meetings of the "Akademie". Solovine later reported that Mileva Maric, Einstein's former fellow student and first wife sometimes had listened attentively to the talks of the friends but never began to speak.

Though the "Akademie Olympia" only existed for a short time - Conrad Habicht left Bern in 1904, Maurice Solovine in 1905 - Einstein remembered it often and it has, according to his own words, promoted his scientific career. The three founding members whose strong friendship was established by the Academy stayed all their life in touch with each other and the "Akademie Olympia" lived on in their mind.

In a letter to Maurice Solovine Einstein commemorated in 1953 the "Akademie Olympia" which was founded in Bern in 1902.

"To the immortal Akademie Olympia.

In your short active life you have amused yourself about all in childish joy what was clear and clever. Your members have created you to laugh about your big, old and arrogant sisters. How much they have hit bull's eye with this I have learnt through many years of thorough watching.

All three of us members have proved at least as lasting. Even if they are already a bit doddery something of your happy and lively light shines on our lonely path of life; because you haven’t grown old with them and you’ve grown up like a salad plant going to seed.

To you is aimed our truth and devotion until the last erudite breath! The now only corresponding member

Princeton 3. IV. 53."
I just wonder if such comradery exists today--it did at least 40 years ago.