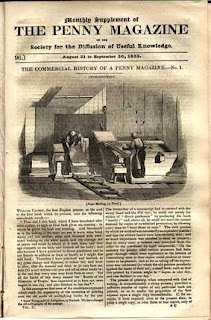 "The Penny Magazine, published every Saturday, was aimed at the working class. It was part of the Society for the Diffusion of Useful Knowledge's program for liberal reform. for its reader, however, it was a source of information on subjects of general interest: everyday things like tea and coffee, well-known places in England, a series on animals and birds of Britain, descriptions of prsent-day manufacturing, even an American alaman and a serial of a personal account of an immigrant's problems. Poetry was published, too, and there are several illustrations in each issue."
The popularization of science is nothing new for in England [early 19th century] an attempt was made to build a bridge between the academic realm and the citizen. It was called the "Society for the Diffusion of Useful Knowledge" [SDUK--1828] and represented a potpourri of subject matter. The SDUK had a short life span and one of its most successful publication was called the "Penny Magazine" which covers geography, poetry, history, and the sciences.

Email ThisBlogThis!Share to TwitterShare to FacebookShare to Pinterest
Labels: "The Penny Magazine", SDUK, Society for the Diffusion of Useful Knowledge