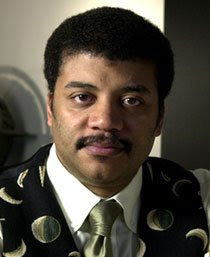 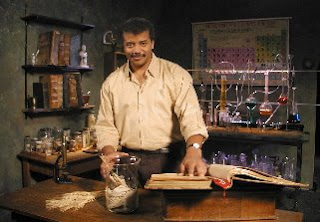 A few nights ago the local PBS station began to rebroadcast NOVA's four part series called Origins that attempted to explain the origins of the solar system with emphasis on Earth. Like the majority of these type of programs of popularization of science it provided all the "bells and whistles" that a computer could generate for illustration. I lost count...how many comets and asteroids were depicted hitting the Earth? Nevertheless, the host was a good choice. Neil deGrasse Tyson exhibits enthusiasm and skill in presentation. There were two interesting items: The formation of the moon and the possibility of Earth's water delivered by nearby icy comets. The former includes an interesting hypothesis by William K. Hartman; that the Earth was struck some 4.5 billion years ago by solar system forming debris where the debris was absorbed and a large chunk was displaced--the moon. And that the gravitational interactions of the two plus the initial collision force tilted the Earth's axis--thus the seasons. Hartman has deduced that the Moon was quite closer at one time and is slowly moving away. [Maybe this will be more of a concern than being hit by an asteroid or alien invasion.] The Earth's water origin hypothesis is interesting too; that local comets of ice struck Earth's surface, vaporized, and eventually condensed into areas of liquid water. Interesting to note is the emphasis on "local comets" for the water on Earth contains very little "heavy water" content which is not common in nearby comets and quite common in very distant comets. Overall, a series worth watching.

Since the death of Carl Sagan, a vacuum was left when it came to popularizing science, but there are new individuals on the horizon. There is Brian Greene and now Neil deGrasse Tyson [Astrophysicist and Director of the Hayden Planetarium, New York City]. Like Greene, Tyson is quite qualified academically and has a fine smooth persona of presentation. His on camera presentations are flawless and professional and avoid the pedantic. The "voice overs" are clear and carry the pipes of a professional radio personality/announcer. Neither Greene nor Tyson, as of yet, has achieved the status of "charm" that Sagan had, but they nevertheless do a fine job in popularizing science. And he will be hosting the second season of NOVA Science Now in the Spring of 2008.

As Neil Tyson said about Origins:

Origins is the attempt to bring to the public, really for the very first time, a synthesis of all the branches of science that have relevance to answering the question, 'What is the origin of our place in the cosmos?'

"Where Are the Aliens?"

"Back to the Beginning"

The Origin of the Moon