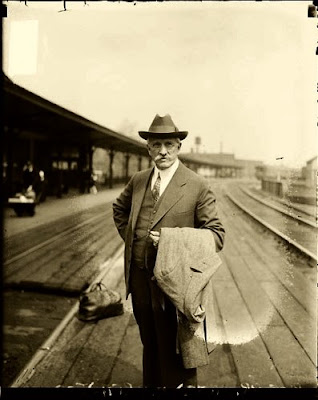 James Henry Breasted
The Cuneiform Digital Library Initiative (CDLI) represents the efforts of an international group of Assyriologists, museum curators and historians of science to make available through the internet the form and content of cuneiform tablets dating from the beginning of writing, ca. 3350 BC, until the end of the pre-Christian era. We estimate the number of these documents currently kept in public and private collections to exceed 500,000 exemplars, of which now more than 200,000 have been catalogued in electronic form by the CDLI.

"The civilizations of the ancient Near East produced the world's earliest written texts -- in hieroglyphs, cuneiform, and alphabets-- with which they described the first empires, recorded the first legal codifications, preserved the first love songs, and registered the first contracts, among states or individuals. Not surprisingly, these cultures elicited broad curiosity among later civilizations, our own not excepted, resulting in a flood of evaluation, scholarly or otherwise. While the discovery of new texts always leads to new evaluation, it is remarkable how assessments arrived at decades ago continue to be of much value, not only because they often carry editions of original documents, but because they contain insights minted freshly after first exposure to major documents.

ETANA has digitized, and continues to digitize texts selected as valuable for teaching and research relating to Ancient Near Eastern studies. We have selected primarily editions that are outside of copyright, or with the permission of copyright holders. While the new electronic editions we have produced are under copyright, the ETANA project chooses to make these freely available for non-commercial teaching and research purposes."


And this cannot be overlooked if you wish detailed information on Howard Carter's discovery and exploration of King Tutankhamunin's tomb.

Tutankhamun: Anatomy of an Excavation
This is quite a detailed website on Howard Carter's excavation of the tomb of King Tutankhamunin in the early 1920's. There is contextual material, diaries, and hundreds of photographs. Hours could be spent here.

"Tutankhamun: Anatomy of an Excavation is ambitious in its scope but simple in its aims: to make the complete records of Howard Carter's excavation of the tomb of Tutankhamun available on these web pages. It is astonishing, but no longer acceptable, that some eighty years and thousands of articles, hundreds of books, and dozens of exhibitions after the discovery of the tomb, this most famous event in the history of Egyptian archaeology has not yet been fully published. The documentation is presented in its original form and all, scholars, interested members of the public and school students, can consult it. We hope that this will help bring the knowledge and love of ancient Egypt to everybody."

Tutankhamun: Anatomy of an Excavation


The Oriental Institute is making more and more scholarly publications available online--a task too daunting to be listed here even though many are listed. Thus, it would be better to check their website for full listings.


Here Are Other Individual Listings:

Bismya or The Lost City of Adab

Ancient Records of Egypt: Historical Documents from the Earliest Times to the Persian Conquest

Includes the Ptah-Hotep and the Ke'gemini, the Wisdom of Hermes Trismegistus, and the Story of the Book of Thoth.

The Wisdom of the Egyptians

The Book of the Bee

The Egyptian Book of the Dead

The Egyptian Heaven and Hell

Egyptian Ideas of the Future Life

Legends of the Gods: The Egyptian Texts

The Liturgy of Funerary Offerings

The Queen of Sheba and Her Only Son Menyelek

The Sanctuary of Artemis Orthia at Sparta

The Burden of Isis

The Demotic Magical Papyrus of London and Leiden

Legends of Babylonia and Egypt

Lost Nubia: A Centennial Exhibit of Photographs from the 1905-1907 Egyptian Expedition of the University of Chicago

Mercer, Samuel A. B. [translator]

The Origin and Significance of the Great Pyramid [1882]

The Wilderness of Zin (Archaeological Report)


I also suggest that you visit Andie Byrnes's websites:

The Archaeology of the Eastern Desert

The Origins & Spread of Agriculture