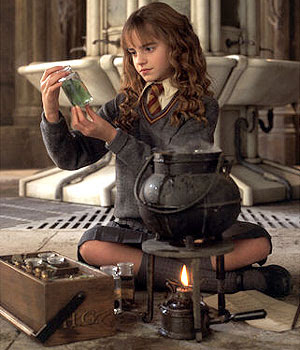 There is science in the episodic adventures of the Hogwarts's hero and sidekicks.

The Science of Harry Potter: How Magic Really Works

"The Science of Harry Potter by, Roger Highfield"

The Observer
Roger Highfield’s last book, Can Reindeer Fly?, received the world's shortest book review, "No." The Loaded critic clearly had not read the book, because it contains a vivid description of a whole range of cutting edge research to prove that Santa’s supersonic sleigh could indeed be powered by Rudolph and his colleagues.

Having explained the physics of Christmas, science journalist Highfield has moved on to unravel the scientific basis for the phenomena that exist in the world of Harry Potter. He has interviewed the world's best Muggle scientists to identify the explanations behind everything from the Mirror of Erised to the Invisibility Cloak.

For example, how do broomsticks such as the Nimbus 2002 fly? Highfield discusses aerodynamics and the concept of
anti-gravity with eminent boffins such as Ron Koczor of NASA's Marshall Space Flight Centre. My favourite explanation is based on magnetic levitation. Usually we think of magnets as only influencing metals, but a sufficiently intense magnetic field can induce a so-called dimagnetism in anything and thereby lift it.

Although the biggest object lifted by Muggles is a frog at the Nijmegen High Field Magnet Laboratory, there is no reason why the grounds of Hogwarts should not be riddled with super strong magnets. However, one mystery remains. The force resulting from diamagnetism depends on the material in the field, so flesh would be lifted more than bone. So Quidditch players would have the perverse experience of having their bones held up by flesh. This has not been commented on in any of J.K. Rowling's books, so presumably the wizards have found a solution to this uncomfortable problem.

The Sorting Hat, which reads the mind of Hogwart's new pupils and assigns them to a house, is easier to explain. Scientists have already developed the Superconducting Quantum Interference Device (SQUID), which can be arranged in a hat formation and placed on a person's head, where they can detect the tiny magnetic fields generated by electric currents jumping between brain cells. Scientists who spoke to Highfield have had only limited success in translating these magnetic signals into thoughts, but clearly it is only a matter of time before we Muggles can build something to match the Sorting Hat.

In order to enjoy this book, you will clearly need to be a fan of Harry Potter, and probably a fan of the more mature variety, because some of the scientific ideas are quite challenging. However, it would be great if teenagers were encouraged to tackle the book, as it is a great introduction to a whole variety of scientific issues from game theory to evolution, mixed with a sense of humour and bizarre examples.