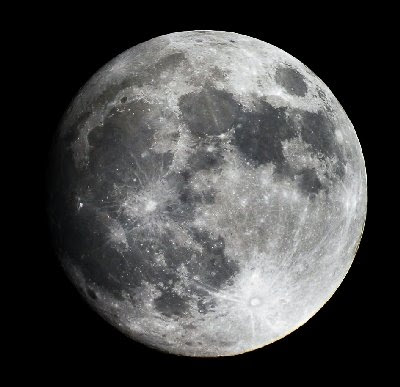 We take it for granted, write poems about it, and plan trips to it again--the moon. But consider this sobering thought...what if the Earth didn't have a moon.

Astrobiology Magazine
If the time of Earth’s existence was condensed into a 24-hour clock, the moon formation event occurred just 10 minutes after the Earth was born. The Earth formed 4.56 billion years ago, and the Moon formed about 30 million years later. At that time, the Earth was a magma ocean. An impactor about the size of Mars struck the Earth at an oblique angle, and removed some of the magmatic mantle. This mantle was put in orbit around the Earth, together with some of the debris from the impactor itself, and this material eventually formed the Moon.

When the Moon first formed, it was very close to the Earth. It was possibly only 20 to 30 thousands of kilometers away, and it would have looked extremely large in the sky, at least 20 to 10 times bigger. But there were no living creatures on the Earth at that time to witness this beautiful scene.

The tidal effect of a body increases as a cube of the distance, so the effect of the Moon’s tidal forcing on the Earth was extremely high at this time, to the point that the early magma ocean was affected. This provided some additional energy to the heating from radioactive elements present, but after the radiogenic heating decayed, the Moon still was a source of heating that may have had some geological effect, keeping the Earth’s magma hot and perhaps forcing additional convection in the Earth’s mantle.

After the Earth started to cool, the first crust started to float on top of the magma. During this period the Earth was subjected to increased meteor bombardment. The bombardment had been very intense at the beginning of the solar system and then had started to decline, but about 500 million years after the birth of the Earth, or about 2 hours and 40 minutes into our clock of 24 hours, there was a burst of impactors. This lasted for about hundred million years, and we call this “the late heavy bombardment.” Many of the large basins on the Moon are evidence of this late heavy bombardment period. In this way, the Moon is a history book for the inner solar system and the Earth. We have studied these basins with the SMART-1 mission.

The Earth was hit more often than the Moon, however, because Earth is larger and has more gravity. This increased gravity also caused the impactors to be accelerated to higher velocities towards the Earth. That must have been a catastrophic time to be here. So many bombardments would have sterilized the planet. If life had appeared before this period, it would have been extinguished unless it found a way to retreat into niches where it could be protected from these global catastrophes.

When some of these impactors hit the Earth, the explosion caused rocks and dirt from Earth to shoot up and away from our planet. Some of that projected material flew all over the solar system, and some of it landed on the Moon. There could be a few hundred kilograms of Earth material per square kilometer of the Moon’s surface, buried under a few meters of lunar soil. It would be interesting to retrieve those rocks and bring back samples of the early Earth. Almost nothing from this time period has survived on the Earth because of tectonic recycling of the crust plates or because of atmospheric weathering. We would try to detect some organics within those rocks, and that could tell us about the history of organic chemistry on Earth. Some of these rocks could even have preserved fossils of life. Such rocks could help us look further back into the fossil record, which now stops at 3.5 billion years ago. This way, we could possibly learn about the emergence of life on Earth.

By exploring the Moon, we also can get clues on how the Earth has evolved. We can study processes on the Moon that have also shaped the Earth, like volcanism and tectonics. Because the Moon is smaller than the Earth, the Moon’s radiogenic heating dissipated much faster. After about one billion years, the interior of the Moon didn’t evolve much, and surface changes mostly were due to impacts. There was a brief period of magmatic activity from the subsurface -- a few plumes of magma made their way up to the surface and filled newly formed impact basins with basalt, creating what we call the Maria. This happened up to about 2 billion years ago. Because the Moon offers different conditions than the Earth, we can better understand how physical processes work generally by studying a larger range of parameters than just the Earth’s.

The Moon affects the liquid envelope of the Earth, and the oceanic tides in particular. The Moon affects the ocean tides more in some areas than others. For instance, in the channel between the British Isles and the European continent, the tidal range can be 10 meters, compared to what you see in the Pacific, where it is below a meter.

The crust of the Earth is also affected. The Moon’s tidal forcing causes significant heating and dissipation of energy to take place. Part of this energy is heating the Earth, and part of it is dissipated by forcing the Moon to recede from the Earth over time. There are people who propose that the tidal effect of the Moon may have helped trigger the convection on the Earth that led to the multi-plate tectonics. The other planets don’t have the same tectonic cycle. For most of them, the crust is like a lid that doesn’t move much horizontally, and the magma and heat are blocked by this lid on the surface. The Earth instead has rolling convective motion that drags the crust, and then the crust plunges back down into the mantle and gets recycled.

There are some very subtle effects of the Moon in the climate and the oceans. One pattern that has been found recently is related to the Pacific Ocean’s El Niño phenomenon. You have a cold undersea current coming from the Antarctic sea, and that creates the Humboldt stream which keeps the sea around the South American coast near Peru and Chile quite cold. Because of this, there are fewer clouds and less precipitation there. Sometimes this current drifts away from the coast, and then you have much more cloud formation and a period of very bad weather over South America. Satellites have monitored this stream over the Pacific Ocean and they have found some streams which were not known before. They can connect some of these streams with how the Moon’s tidal effect influences the mixing of the deep ocean. There was a French-American mission called TOPEX/Poseidon that accurately measured the altitude of the sea and detected a little stream a few centimeters high. That doesn’t seem like a lot, but over the whole area of the Pacific Ocean it represents a huge amount of water transferred from one place to another.

If you would take away the Moon suddenly, it would change the global altitude of the ocean. Right now there is a distortion which is elongated around the equator, so if we didn’t have this effect, suddenly a lot of water would be redistributed toward the polar regions.

The Moon has been a stabilizing factor for the axis of rotation of the Earth. If you look at Mars, for instance, that planet has wobbled quite dramatically on its axis over time due to the gravitational influence of all the other planets in the solar system. Because of this obliquity change, the ice that is now at the poles on Mars would sometimes drift to the equator. But the Earth’s moon has helped stabilize our planet so that its axis of rotation stays in the same direction. For this reason, we had much less climatic change than if the Earth had been alone. And this has changed the way life evolved on Earth, allowing for the emergence of more complex multi-cellular organisms compared to a planet where drastic climatic change would allow only small, robust organisms to survive.

The Moon has influenced biology in other ways as well. For species living near the coast, the tide is an important factor. When you look at the shorelines, you can recognize different layers of organisms that have adapted to the salt water conditions based on the ebb and flow of the tide.

The eyesight of many mammals is sensitive to moonlight. The level of adaptation of night vision would be very different without the Moon. Many of these species have evolved in such a way that their night vision could work in even partial lunar illumination, because that’s when they are most active. But they can be more subjected to predators, too, so there is a balance between your ability to see and your ability not to be seen. The Moon has completely changed evolution in that aspect.

Human vision is so sensitive that we are almost able to work by the light of the Milky Way. The full Moon has more light than we need to see at night. For most of our history, we were hunting and fishing or doing agriculture, and we organized our lives by using the Moon. It determined the time for hunting, or the time where we could harvest. That’s why most of our calendars are based on the Moon.

In a recent workshop called "Earth-Moon Relationships," psychologists discussed the relation between the lunar phases and several aspects of life. There was a very interesting correlation, not with the birth of children, but with the time of conception. Perhaps that is due to some social or sentimental value of the Moon. We tend to forget the impact the Moon has on our lives because we use electric lights, but for most of our history we had to adapt our behavior to the lunar phases.

Finally, the Moon had a key role in the emergence of science, and in our understanding of our place in the universe. We saw the repetition of the phenomena of lunar phases, and we observed solar and lunar eclipses. These were big challenges to our understanding of nature, and a few astronomers were put to death because they weren’t able to predict the eclipses. This challenged us to develop accurate predictions for the motion of the sun and the motion of the Moon.

Studying the Moon helped us determine distances in the solar system and the size of celestial objects. By studying lunar phases, for example, people were able to determine how far the Moon is from the Earth, the size of the Earth, and our distance from the sun. More recently, the Moon was the terrain where the space race took place between two political systems, allowing for great technical and scientific achievements. The Moon has inspired humankind to learn how to travel to space, and to bring life beyond Earth’s cradle.