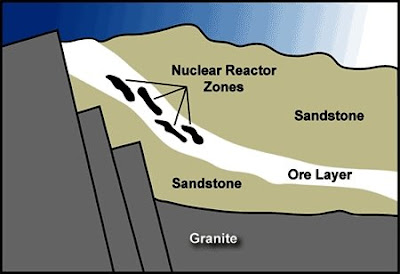 Oklo: Natural Nuclear Reactors
Creating a nuclear reaction is not simple. In power plants, it involves splitting uranium atoms, and that process releases energy as heat and neutrons that go on to cause other atoms to split. This splitting process is called nuclear fission. In a power plant, sustaining the process of splitting atoms requires the involvement of many scientists and technicians.

It came as a great surprise to most, therefore, when, in 1972, French physicist Francis Perrin declared that nature had beaten humans to the punch by creating the world’s first nuclear reactors. Indeed, he argued, nature had a two-billion-year head start.1 Fifteen natural fission reactors have been found in three different ore deposits at the Oklo mine in Gabon, West Africa. These are collectively known as the Oklo Fossil Reactors.2

And when these deep underground natural nuclear chain reactions were over, nature showed that it could effectively contain the radioactive wastes created by the reactions.

No nuclear chain reactions will ever happen in a repository for high-level nuclear wastes. But if a repository were to be built at Yucca Mountain, scientists would count on the geology of the area to contain radionuclides generated by these wastes with similar effectiveness.

In the early 1970s, French scientists noticed something odd about samples of uranium recovered from the Oklo mine in Gabon, West Africa. All atoms of a specific chemical element have the same chemical properties, but may differ in weight; these different weights of an element are known as isotopes. Some uranium samples from Gabon had an abnormally low amount of the isotope U-235, which can sustain a chain reaction. This isotope is rare in nature, but in some places, the uranium found at Oklo contained only half the amount of the isotope that should have been there.3

Scientists from other countries were skeptical when first hearing of these natural nuclear reactors. Some argued that the missing amounts of U-235 had been displaced over time, not split in nuclear fission reactions. "How," they asked, "could fission reactions happen in nature, when such a high degree of engineering, physics, and acute, detailed attention went into building a nuclear reactor?"

Perrin and the other French scientists concluded that the only other uranium samples with similar levels of the isotopes found at Oklo could be found in the used nuclear fuel produced by modern reactors. They found that the percentages of many isotopes at Oklo strongly resembled those in the spent fuel generated by nuclear power plants, and, therefore, reasoned that a similar natural process had occurred.4

The uranium in the Earth contains dominantly two uranium isotopes, U-238 and U-235, but also a very small percentage of U-234, and perhaps small, undetectable amounts of others. All of these isotopes undergo radioactive decay, but they do so at different rates. In particular, U-235 decays about six-and-a-third times faster than U-238. Thus, over time the proportion of U-235 to U-238 decreases. But this change is slow because of the small rates of decay.

Generally, uranium isotope ratios are the same in all uranium ores contained in nature, whether found in meteorites or in moon rocks. Therefore, scientists believe that the original proportions of these isotopes were the same throughout the solar system. At present, U-238 comprises about 99.3 percent of the total, and U-235 comprises about 0.7 percent.5 5 Any change in this ratio indicates some process other than simple radioactive decay.

Calculating back to 1.7 billion years ago—the age of the deposits in Gabon—scientists realized that the U-235 there comprised about three percent of the total uranium. This is high enough to permit nuclear fissions to occur, providing other conditions are right.6

So how did nuclear reactions occur in nature?

Deep under African soil, about 1.7 billion years ago, natural conditions prompted underground nuclear reactions. Scientists from around the world, including American scientists have studied the rocks at Oklo. These scientists believe that water filtering down through crevices in the rock played a key role. Without water, it would have been nearly impossible for natural reactors to sustain chain reactions.

The water slowed the subatomic particles or neutrons that were cast out from the uranium so that they could hit-and split-other atoms. Without the water, the neutrons would move so fast that they would just bounce off, like skipping a rock across the water, and not produce nuclear chain reactions. When the heat from the reactions became too great, the water turned to steam and stopped slowing the neutrons. The reactions then slowed until the water cooled. Then the process could begin again.7

Scientists think these natural reactors could have functioned intermittently for a million years or more. Natural chain reactions stopped when the uranium isotopes became too sparse to keep the reactions going.

What happened to the nuclear waste left at Oklo?

Once the natural reactors burned themselves out, the highly radioactive waste they generated was held in place deep under Oklo by the granite, sandstone, and clays surrounding the reactors’ areas. Plutonium has moved less than 10 feet from where it was formed almost two billion years ago.8

Today, manmade reactors also create radioactive elements and by-products. Scientists involved in the disposal of nuclear waste are very interested in Oklo because long-lived wastes created there remain close to their place of origin.

The Oklo phenomenon gives scientists an opportunity to examine the results of a nearly natural two billion-year experiment, one that cannot be duplicated in the lab. By analyzing the remnants of these ancient nuclear reactors and understanding how underground rock formations contained the waste, scientists studying Oklo can apply their findings to containing nuclear waste today. The rock types and other aspects of the geology at Oklo differ from those at Yucca Mountain. But this information is useful in the design of a repository at Yucca Mountain. Were the Oklo reactors a unique event in natural history? Probably not. Scientists have found uranium ore deposits in other geological formations of approximately the same age, not only in Africa but also in other parts of the world, particularly in Canada and northern Australia. But to date, no other natural nuclear reactors have been identified.

Scientists believe that similar spontaneous nuclear reactions could not happen today because too high a proportion of the U-235 has decayed. But nearly two billion years ago, nature not only appears to have created her first nuclear reactors, she also found a way to successfully contain the waste they produced deep underground.

The radioactive remains of natural nuclear fission chain reactions that happened 1.7 billion years ago in Gabon, West Africa, never moved far beyond their place of origin. They remain contained in the sedimentary rocks that kept them from being dissolved or spread by groundwater. Scientists have studied Yucca Mountain to see if the geology there might play a similar role in containing high-level nuclear waste.

Note: In 1956 while at the University of Arkansas, Dr. Paul Kuroda described the conditions under which a natural nuclear reactor could occur. When the Oklo reactors were discovered in 1972, the conditions found there were very similar to his predictions. Dr. Kuroda now lives in Las Vegas, Nevada where he has been a scientific resource for the United States Department of Energy.