The nerd and entrepreneur 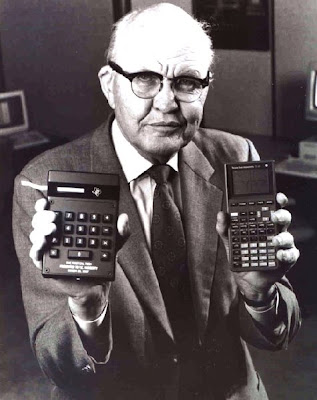 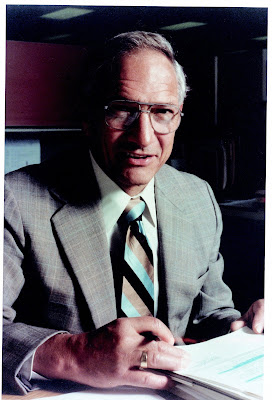 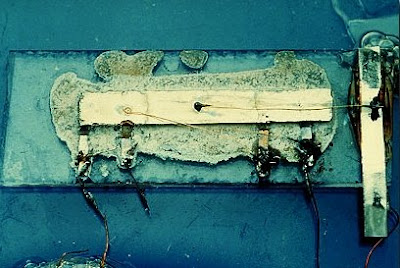 Jack Kilby's First Integrated Circuit
ca. 1958
I suppose the achievements of Jack Kilby [and Robert Noyce] influenced the world much as the Voyage of Columbus. I suppose one could call this the saga of the nerd and entrepreneur: Jack Kilby and Robert Noyce. It is a story of serendipitous and concurrent events. Thanks to Jack Kilby and a portion of my lawn mowing bucks via Texas Instruments, I began to mothball my ever present slide rule. I bought my first calculator. Way cool. No more did I have to fool with sliding cursors and ruining my eyesight matching and reading vertical lines or even fussing with decimal points. Jack Kilby invented integrated circuits and the microchip and thus changed the world. [Jack Kilby died June 20th, 2005 in Dallas, Texas at the age of 81.] Well, maybe not. I suppose one gets into the politics of discovery and invention here. It is not impossible that simultaneous events do happen. Concurrently with Jack Kilby's experiments was the work done by Robert Noyce aka "Mayor of Silicon Valley" and associated with the famous Silicon Valley institutions Fairchild Semiconductor and Intel companies.

There are few men whose insights and professional accomplishments have changed the world. Jack Kilby was one of these men. His invention of the monolithic integrated circuit - the microchip - almost 50 years ago at Texas Instruments (TI) laid the conceptual and technical foundation for the entire field of modern microelectronics. It was this breakthrough that made possible the sophisticated high-speed computers and large-capacity semiconductor memories of today's information age.

Mr. Kilby grew up in Great Bend, Kansas. With B.S. and M.S. degrees in electrical engineering from the Universities of Illinois and Wisconsin respectively, he began his career in 1947 with the Centralab Division of Globe Union Inc. in Milwaukee, developing ceramic-base, silk-screen circuits for consumer electronic products.

In 1958, he joined TI in Dallas. During the summer of that year working with borrowed and improvised equipment, he conceived and built the first electronic circuit in which all of the components, both active and passive, were fabricated in a single piece of semiconductor material half the size of a paper clip. The successful laboratory demonstration of that first simple microchip on September 12, 1958, made history.

Jack Kilby went on to pioneer military, industrial, and commercial applications of microchip technology. He headed teams that built both the first military system and the first computer incorporating integrated circuits. He later co-invented both the hand-held calculator and the thermal printer that was used in portable data terminals.

In 1970, he took a leave of absence from TI to work as an independent inventor. He explored, among other subjects, the use of silicon technology for generating electrical power from sunlight. From 1978 to 1984, he held the position of Distinguished Professor of Electrical Engineering at Texas A&M University.

Mr. Kilby officially retired from TI in 1983, but he maintained a significant involvement with the company throughout his life.

Jack Kilby was the recipient of two of the nation's most prestigious honors in science and engineering. In 1970, in a White House ceremony, he received the National Medal of Science. In 1982, he was inducted into the National Inventors Hall of Fame, taking his place alongside Henry Ford, Thomas Edison, and the Wright Brothers in the annals of American innovation.

Mr. Kilby held over 60 U.S. patents. He was a Fellow of the Institute of Electrical and Electronics Engineers (IEEE) and a member of the National Academy of Engineering (NAE). He was awarded the Franklin Institute's Stuart Ballantine Medal, the NAE's Vladimir Zworykin Award, the American Society of Mechanical Engineers' Holley Medal, the IEEE's Medal of Honor, the Charles Stark Draper Prize administered by the NAE, the Cledo Brunetti Award, and the David Sarnoff Award. On the 30th anniversary of the invention of the integrated circuit, the Governor of Texas dedicated an official Texas historical marker near the site of the TI laboratory where Mr. Kilby did his work.

In 2000, Jack Kilby was awarded the Nobel Prize in Physics for his part in the invention of the integrated circuit.

Mr. Kilby passed away on June 20, 2005, in Dallas following a brief battle with cancer. Yet, his legacy lives on.

From Jack Kilby's first simple circuit has grown a worldwide integrated circuit market whose sales in 2006 totaled $210 billion. These components supported a 2006 worldwide electronic end-equipment market of $1,402 billion. Such is the power of one idea to change the world.

The ThinkQuest Library on Robert Noyce:

Robert Noyce, co-founder of Intel Corp., was one of the pioneers of semiconductor development.

He received a B.A. from Grinnell College (Iowa) in 1949 and a Ph.D. in physical of products from the Massachusetts Institute of Technology in 1953. HE then conducted research at Philco Corp. until 1956, when he joined the Shockley Semiconductor Laboratory in Palo Alto, CA, to work on transistor technology.

In 1957 Noyce co-founded the Fairchild Semiconductor Corp. in Mountain View, CA. He was research director until early 1959 when he became vice president and general manager. As research director of Fairchild semiconductor, he was responsible for initial development of transistors for mass production. On April 25, 1960, Dr. Noyce was granted a patent for his invention of a " Semiconductor Device-and-Lead Structure." This discovery made the microchip possible and launched a modern electronics revolution with the development of his Integrated Circuit. In July 1968 he co-founded Intel Corp. with Gordon E. Moore, who had also been a Co-founder of Fairchild Semiconductor and a member of the Shockley laboratory staff. Noyce served as president of Intel until 1975 and chairman of the board from 1975 to 1979.

There are many personal anecdotes of Einstein and here is one about Jack Kilby from his sister Jane as they grew up in Great Bend, Kansas.

"Our house was full of books," said Jane Kilby of Dallas, Texas, younger sister of microchip inventor Jack Kilby. Jack and Jane’s parents were graduates of the University of Illinois, and emphasized reading. "We would recite chunks of Shakespeare at the dinner table, and my parents could finish our sentences if we forgot a passage," she said.

In addition to having well-educated parents, the cream-colored Victorian house they lived in seemed like a library. "There were books everywhere," said Jane Kilby.

The Kilbys rented the Victorian house at 1407 Washington from E.R. Moses, Jr. from approximately 1934 to 1951. The house, known by many Great Benders as "the Komarek house," was an ideal atmosphere for learning.

The house was full of books and magazines that belonged to E.R. Moses, Sr, the original builder of the house. "We had a set of 1918 Britannica Encyclopedias, which were considered the best encyclopedias," she said. Also, the basement contained many old issues of Scribners Monthly magazine, full of articles on history, especially the Civil War.

Jack and Jane Kilby played in the GBHS band together, at least one year. Jack played a trombone and Jane played a clarinet. "Jack enjoyed photography a great deal, but after the 1937 blizzard, he became terribly interested in ham radio," she said. "He would contact people from all over the place." The family had traveled to Denver so that the teenage Jack Kilby could pass the test to get his own ham radio license. Kilby’s father, the President of Kansas Power Co., had used a local ham radio operator, Roy Evans, to communicate with various power plants during the blizzard of 1937.

Jack and Jane Kilby were both born in Jefferson City, MO. They moved to Salina when their Dad, Hubert S. Kilby, took a job as President of Kansas Power Co. The headquarters for Kansas Power Co. was changed to Great Bend in 1934, so the Kilby’s moved to Great Bend. Jack started 7th grade at the downtown Great Bend Middle School , and Jane began in 4th grade at Washington Elementary School.

Jane Kilby described her brother as "down to earth," with a good sense of humor. She recoiled at the suggestion that Jack shouldn’t be so modest about his accomplishments, recalling that her parents were unpretentious: "You just didn’t toot your own horn. Whatever you did would speak for itself more loudly than anything you could say."

Jack and Jane’s father died in 1972, and their mother died in 1980. "Dad got to see Jack get some credit for his inventions, but Mom got to see him get more credit as time passed," she said.

"Great Bend was a tremendous place to grow up," she said. "You knew who you were and what was expected." Jane Kilby plans to accompany her brother to their hometown on October 12.

Ahhhh such memories!! To have a Texas Instrument Calculator was too cool. I Remember signing up for a Summer course in statistics and at the end thanking the gawds for a calculator. How far we have come is the other day I saw a calculator at the Dollar Store....we have come a long way!!! Great article...thanks