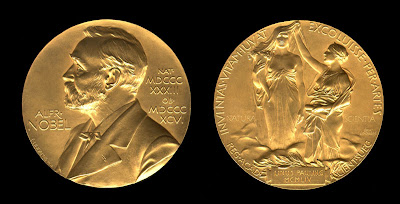 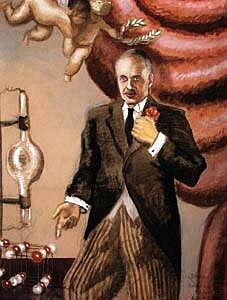 Painted by Homi Bhabha and Hugh Carmichael in 1939 and resides at the Cavendish Laboratory in Cambridge, England 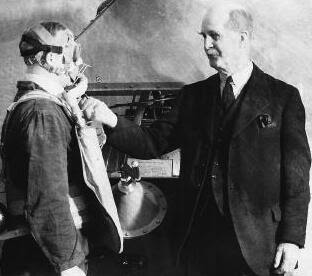 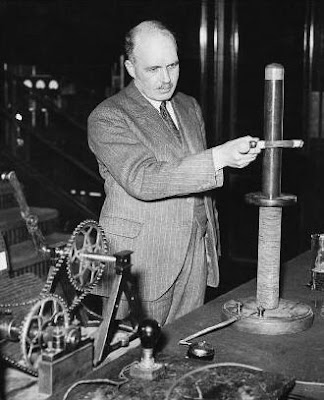 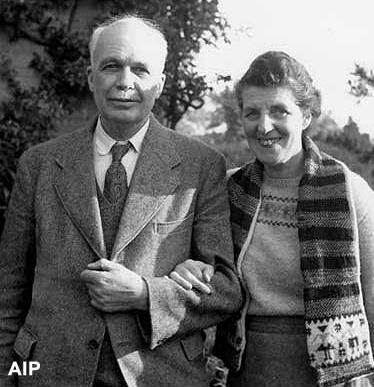 Sir William Lawrence Bragg (then Head of the Cavendish Laboratory) and Lady Bragg in their garden in Cambridge, England, October 1951.

A blast from the past by a relatively unknown in the realm of physics who finally found his niche in teaching science to youngsters. The person is William Lawrence Bragg who was the youngest person to win a Nobel Prize [with his father Sir William Bragg] in 1915 involving the invention of X-ray crystallography.

Light is a Messenger: The Life and Science of William Lawrence Bragg

Sir Lawrence Bragg was my professor in my student and early teaching days. To his family he was Willie, and only became Sir Lawrence because his father was already Sir William. If I refer to him as Willie it is simply to avoid ambiguity; of course, I never thought of him or addressed him so. The two Braggs had shared the 1915 Nobel Prize for Physics for inventing X-ray crystallography; Willie, at 25, was the youngest winner ever. His pride, however, became tinged with regret since it was assumed too easily by others that his father was the originator who was generously recognizing help from his son.

In fact it was Willie - a research student at the time - who had the big idea about reflection from crystal planes, and who was later to show such skill in interpreting the diffraction patterns. Sir William's principal contribution lay in instrument development. Theirs was a real collaboration, but not without tensions. We youngsters who knew him as Cavendish Professor in post-war Cambridge knew nothing of the bouts of depression, the sense of inadequacy and the rare but explosive angers of the suave and kindly Edwardian gentleman who had charge of our destinies.

Having become famous at the very outset of his career, Willie - who was then not yet 30 - succeeded Rutherford first at Manchester and then, 20 years later, at Cambridge. But unlike Rutherford, he had little knowledge of nuclear physics or a desire to learn more. Bragg had been a student long before the discovery of quantum mechanics, and was too busy to catch up following its appearance. So when Linus Pauling came on the scene as a very real rival in the 1950s, Bragg faced a skilled quantum theorist and unquestionably a greater chemist. We cannot be surprised to learn of a German scientist in the 1930s wondering "How does Bragg discover things? He doesn't know anything". The only possible answer is that he loved what he was doing, believed research was his most important task, and was prepared to spend all the time needed for his powerful and distinctive imagination to get to grips with a problem. As the Cambridge geophysicist Teddy Bullard once remarked, "Bragg can't stand having anyone cleverer around, and it's lucky for the Cavendish he's so clever himself".

With his limitations and hatred of administration, how well did he cope at the Cavendish Laboratory? In the vernacular of the time, jolly well. He had to reconstruct everything in 1945, with no hope of recovering the lab's pre-eminence in nuclear physics but with a queue of talented wartime graduates longing to get their teeth into research. With Norman Feather's aid, he took his pick and encouraged individual research groups to make their own way, breaking from the monolithic Rutherford tradition (which was not, in fact, quite so monolithic as legend has it).

From this initiative sprang conquests in radio astronomy, low-temperature physics, metal physics and, in due course, molecular biology - the finest Cavendish achievement of all. He also got the university's agreement to appoint a laboratory secretary and an accountant so that in the end, and against the odds, he himself could find time for research - encouraging and inspiring Max Perutz and John Kendrew in their all-but-impossible ambition to resolve completely the structure of a protein.

"When I was stuck," Perutz told me, "I'd talk to Bragg and he always had a suggestion for overcoming the difficulty." From the few conversations that I had with Bragg at the time, I know this was true - the old buffer was not past it by a long chalk.

Bragg left the Cavendish in 1953 to become director of the Royal Institution (RI), just as his father had done in his time. His immediate predecessor, the spasmodically likeable Edward Andrade, had very nearly wrecked it. The story of his dismissal and of Bragg's appointment is told in the book in some detail and is wryly amusing if one can forget the accompanying private agonies.

It was at the RI that Bragg fully developed Michael Faraday's tradition of lectures "to a juvenile auditory". He had never been wholly successful in lecturing to students but he threw himself into the task of making science exciting to schoolchildren and revealed an enviable gift for analogy and metaphor. He was, perhaps for the first time in his life, really happy while at the RI - having a duty that was a pleasure, a talented team of researchers, and a wife, Alice, who had always given him the love and support he needed. She had talents of her own, and a commanding but friendly presence that had earlier graced her stint as mayor of Cambridge. As a Justice of the Peace, she had expected students to set a good example; to one, charged with a cycling offence, the policeman on duty whispered, "You're for it, my lad, Lady B's on the bench".

I have said little about the science, which is central to the book. The pioneering analysis of mineral structures by X-ray crystallography was a cerebral sport demanding severe concentration, trial and error, and the special genius that was Bragg's. In this first-ever biography of Bragg, Graeme Hunter - a biochemist at the University of Western Ontario - has done his best to explain the science without a mathematical deluge. However, I fear that many readers - including those who are scientifically literate - will find the details heavy going, even if they will thoroughly enjoy the human story. Bragg himself might have done the trick, but it takes a certain familiarity with crystallography to follow the account with confidence.

All the same, the reticent academic gent was a very important creator, whose life story makes excellent reading.

Brian Pippard was Cavendish Professor of Physics from 1971 to 1982.

William Lawrence Bragg, son of William Henry Bragg, was born in Adelaide, South Australia, on March 31, 1890. He received his early education at St. Peter's College in his birthplace, proceeding to Adelaide University to take his degree in mathematics with first-class honours in 1908. He came to England with his father in 1909 and entered Trinity College, Cambridge, as an Allen Scholar, taking first-class honours in the Natural Science Tripos in 1912. In the autumn of this year he commenced his examination of the von Laue phenomenon and published his first paper on the subject in the Proceedings of the Cambridge Philosophical Society in November.

In 1914 he was appointed as Fellow and Lecturer in Natural Sciences at Trinity College and the same year he was awarded the Barnard Medal. From 1912 to 1914 he had been working with his father, and the results of their work were published in an abridged form in X-rays and Crystal Structure (1915). It was this work which earned them jointly the Nobel Prize for Physics in 1915, and from this year to 1919, W. L. Bragg served as Technical Advisor on Sound Ranging to the Map Section, G.H.Q., France, receiving the O.B.E. and the M.C. in 1918. He was appointed Langworthy Professor of Physics at Manchester University in 1919, and held this post till 1937.

W. Lawrence Bragg, who had been elected Fellow of the Royal Society in 1921, was Director of the National Physical Laboratory in 1937-1938 and Cavendish Professor of Experimental Physics, Cambridge, from 1938 to 1953. He was Chairman of the Frequency Advisory Committee from 1958 to 1960.

Together with his father, he has published various scientific papers on crystal structure after their joint publication of 1915: The Crystalline State (1934), Electricity (1936), and Atomic Structure of Minerals (1937).

Sir Lawrence's chief interests at the present time are the application of X-ray analysis to the structure of protein molecules, which are being investigated in the Davy Faraday Laboratory of the Royal Institution, in continuation of similar work at the Cavendish Laboratory, Cambridge. This collaboration has succeeded in determining for the first time the structure of the highly complex molecules of living matter.

Having been awarded the Nobel Prize at the very early age of 25, W. Lawrence Bragg was the youngest-ever laureate. The very rare opportunity of celebrating a golden jubilee as a Nobel Laureate was given special attention during the December ceremonies at Stockholm in 1965, when Sir Lawrence, at the invitation of the Nobel Foundation, delivered a lecture - the first Nobel Guest Lecture - in retrospect, on developments in his field of interest during the last fifty years.