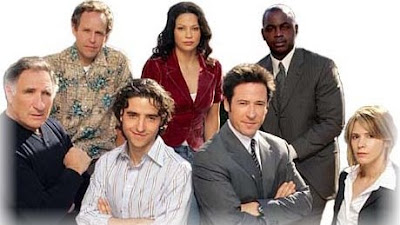 Commercial television network CBS has added a new program to its schedule where there is supposed to be a marriage between crime solutions and "mathematics". The program is called Numb3rs where an FBI agent enlists the aid of his mathematical genius brother to solve crimes. Wonder how this will work. I hope the genius brother doesn't come off like a typical "geek". The program will premier Sunday, January 23rd, 2005 at 10:00pm EST [most likely delayed due to extended football game and be a regular program on Friday nights at 10:00pm EST] in "prime time" [pun?].

To help capture a serial rapist-turned-killer, FBI Special Agent Don Eppes recruits his genius brother Charlie, who uses a mathematical equation to identify the killer's point of origin by working back from the crime scene locations.
And this on January 24th, 2005....

A cursory evaluation of “Numb3rs” revealed few positive attributes from the premier episode. One would hope that the program improves. I must say that I am unfamiliar with the actors save for Judd Hirsch who frankly could have been written out of the script. I like Hirsch and his role here was extremely low key whose sole function appeared to be offering the clue to alter the formula that would lead to the criminal. And from that the slow pace quickened to a run. Charlie Eppes [David Krumholtz] did come off as a university [unknown and probably irrelevant] eccentric who I feel is doomed in interpersonal relationships when he claims "Everything is numbers." Romance with his academic advisor? Well, we will see. At the moment he has a more passionate relationship with the blackboard. His brother Don [Rob Morrow], the energetic FBI agent, and supporting co-workers are shallow, lacking depth of development. But episode time may change all of that...hopefully. The display of the program is a cornucopia of flashy screen overlays including the use of mathematical symbols and formulas that are totally meaningless. Only freeze framing would allow one to see what the displays were. There was just too much saturation of this technique. There is one very bright, potential character--Charlie's colleague Dr. Larry Fleinhardt [Peter MacNicol] the physicist. He is the only character that has any depth as when he pleads with Charlie [who is in his 30's] to concentrate more on mathematics for the window of creativity is narrow; that he shouldn't be devoting or waist [?] his time with crime solving. Charlie's focus is way too narrow in assuming prediction [when it comes to human activity] can be based on probability/statistics. Larry reminds him that the variables for human activity cannot be quantified. "Make your formula less elegant", says Larry. Oh well, it was only the introductory episode. Now I am wondering about episode two: "What's inside a bank that is more valuable than money?" I'll give it another chance.

Whatever happened to CBS's Numb3rs. I never saw another episode or even know if it is still on the air.

Well, a little over three years later I noticed that an episode was being aired during my local PBS station's "gimmie your bucks" pledge drive--yawn. I was surprised that it was still on and the program has matured a good deal. The episode "Graphic" involved an extremely rare comic that was stolen. Christopher Lloyd played an aged and revered comic book artist. Has anyone followed this series and willing to offer a perspective?

I have followed it at times and certainly did enjoy the initial programs. What i could not buy into was the predictability although i think they are on target for some aspects of humanity. The father as you mentioned could have been done away with. The mathematicians certainly do show some aspects of the beast but at times it shrinks into a void of boredom. However to all of this i enjoy it more than most programs as i am stuck with normalcy programming when baseball is out of season. Overall though i watch it and prefer it to CSI which has turned drama into a lets follow the trail. "House" is an interesting program concerning medicine and if you enjoy the exotic diagnosis it is your cup of tea.

I doubt I will watch another episode unless there is another PBS fund drive.

Ahhhh so....and we all know PBS is going to be back at it again....as surely as the sun rises