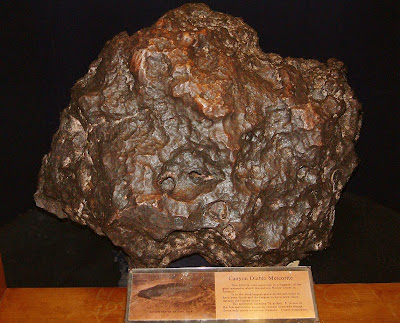 The upper air burst into life!
And a hundred fire-flags sheen,
To and fro they were hurried about!
And to and fro, and in and out,
The wan stars danced between

And the coming wind did roar more loud,
And the sails did sigh like sedge;
And the rain poured down from one black cloud;
The Moon was at its edge

The Rime of the Ancient Mariner

"Shooting star"..."falling star"--make a wish. They are nothing more than meteorites--cosmic debris from comets or asteroids that can cause havoc if large enough such as Meteor Crater (Barringer Crater) in Arizona, the Chicxulub crater region in the Yucatan Peninsula, or the Tunguska event in 1908 in western Siberia.

Now, the value of found meteorites has fluctuated tremendously. Recently [November 2007], an auction was held with less than desired results.

October 29th, 2007
Two of the world's most famous meteorites failed to attract buyers at an auction Sunday, while an ordinary metal mailbox zapped by a falling space rock in 1984 was sold for the unearthly price of nearly $83,000.

A 30-pound chunk of the Willamette Meteorite, which was found in Oregon in 1902 and has been steeped in ownership controversies for more than a century, was offered by Bonhams auction house at an estimated value of $1.3 million but was withdrawn from sale after bidding ended at $300,000.

In both cases the sellers, who were present, said they weren't worried because potential purchasers were known to be interested in the extraterrestrial rocks even though they may not have joined the bidding.

"I'm disappointed, but it was not through any lack of effort," said Philip Mani, a San Antonio lawyer and geologist who is one of three owners of the Brenham meteorite, along with Steve Arnold, who found it, and Allen Binford, who owns the wheat field near Greensburg, Kan., where it was discovered.

"We are in the process of putting together a plan, and we have a number of inquiries from people expressing interest."

The entire 15.5-ton Willamette Meteorite has been owned by the American Museum of Natural History since 1908, with pieces loaned or given to other collectors from time to time.

The small piece was offered at auction by Darryl Pitt, curator of the Macovich Collection, the world's largest collection of space rocks, who traded the museum a Martian rock for the Willamette chip in 1998.

The fact that it went unsold was "not really a surprise," Pitt said, adding that he also expected a lot of interest from prospective buyers.

Having sold several other rocks, including a Siberian meteorite – a product of history's largest known meteor shower – for the day's top price of $122,750, he called the auction "not a bad day. It shows there is a lot of interest in meteorites."

The couple who bought the Siberian rock declined to identify themselves.

Scientists believe the huge Willamette meteorite, the largest ever found in North America, crashed thousands of years ago in what is now Canada and was pushed southward by glaciers before it was discovered in an area occupied by Oregon's Clackamas Indians.

The Confederated Tribes of Grand Ronde, which includes the Clackamas, has objected to the auction of the 30-pound fragment. The tribe believes the meteorite is a sacred object that was sent to Earth by the Sky People; demands for its return to the group have been refused.

"I don't know what to say about their claim," Pitt said after the auction.

Among the more than 50 meteorites, moon rocks and other items that Bonhams auctioned off for a total of $750,000, a surprise star was a mailbox that had sat outside the home of Carutha Barnard in Claxton, Ga., until it was blasted one night in 1984 by a three-pound rock from outer space.

In spirited bidding, the mailbox – somewhat the worse for the experience but with its red metal flag still bravely in the "up" position – went to an unidentified bidder for $82,750 including the buyer's premium of 20 percent. A tiny piece of the rock itself, less than an ounce, went for $7,700.

The Valera Meteorite, noteworthy as the only space rock documented to have caused a fatality on Earth, was sold for $1,554. Its victim in 1972 was a cow in Venezuela.


Meteorites and Their Properties
Posted by Mercury at 6:40 AM