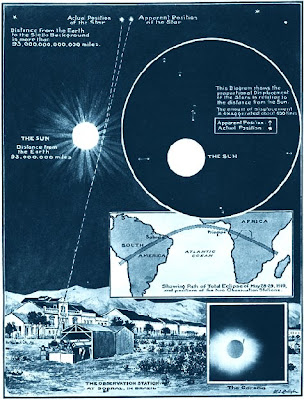 Sir Arthur Stanley Eddington was a champion of Albert Einstein, went to South America with Einstein to view the 1919 solar eclipse, and introduced the world to Einstein--they were good buddies. Sharing an office with Eddington in the early 1920's at Berkeley, W. H. Williams composed the following poem. It has been intimated that it was based on the nonsense poem "The Walrus and The Carpenter" by Lewis Carroll. See for yourself. [The Lewis Carroll poem is last.]

"The Einstein and the Eddington"

The sun was setting on the links,
The moon looked down serene,
The caddies all had gone to bed,
But still there could be seen
Two players lingering by the trap
That guards the thirteenth green.
The Einstein and the Eddington
Were counting up their score;
The Einstein's card showed ninety-eight
And Eddington's was more.
And both lay bunkered in the trap
And both stood there and swore.
I hate to see, the Einstein said;
Such quantities of sand;
Just why they placed a bunker here
I cannot understand.
If one could smooth this landscape out,
I think it would be grand.
If seven maids with seven mops
Would sweep the fairway clean
I'm sure that I could make this hole
In less than seventeen.
I doubt it, said the Eddington,
Your slice is pretty mean.
Then all the little golf balls came
To see what they were at,
And some of them were tall and thin
And some were short and fat,
A few of them were round and smooth,
But most of them were flat.
The time has come, said Eddington,
To talk of many things:
Of cubes and clocks and meter-sticks
And why a pendulum swings.
And how far space is out of plumb,
And whether time has wings.
I learned at school the apple's fall
To gravity was due,
But now you tell me that the cause
Is merely G_mu-nu,
I cannot bring myself to think
That this is really true.
You say that gravitation's force
Is clearly not a pull.
That space is mostly emptiness,
While time is nearly full;
And though I hate to doubt your word,
It sounds like a bit of bull.
And space, it has dimensions four,
Instead of only three.
The square of the hypotenuse
Ain't what it used to be.
It grieves me sore, the things you've done
To plane geometry.
You hold that time is badly warped,
That even light is bent:
I think I get the idea there,
If this is what you meant:
The mail the postman brings today,
Tomorrow will be sent.
If I should go Timbuctoo
With twice the speed of light,
And leave this afternoon at four,
I'd get back home last night.
You've got it now, the Einstein said,
That is precisely right.
But if the planet Mercury
In going round the sun,
Never returns to where it was
Until its course is run,
The things we started out to do
Were better not begun.
And if before the past is through,
The future intervenes;
Then what's the use of anything;
Of cabbages or queens?
Pray tell me what's the bally use
Of Presidents and Deans.
The shortest line, Einstein replied,
Is not the one that's straight;
It curves around upon itself,
Much like a figure eight,
And if you go too rapidly
You will arrive too late.
But Easter day is Christmas time
And far away is near,
And two and two is more than four
And over there is here.
You may be right, said Eddington,
It seems a trifle queer.
But thank you very, very much,
For troubling to explain;
I hope you will forgive my tears,
My head begins to pain;
I feel the symptoms coming on
Of softening of the brain.


"The Walrus and The Carpenter"

Through the Looking-Glass and What Alice Found There

The sun was shining on the sea,
Shining with all his might:
He did his very best to make
The billows smooth and bright--
And this was odd, because it was
The middle of the night.
The moon was shining sulkily,
Because she thought the sun
Had got no business to be there
After the day was done--
"It's very rude of him," she said,
"To come and spoil the fun!"
The sea was wet as wet could be,
The sands were dry as dry.
You could not see a cloud, because
No cloud was in the sky:
No birds were flying overhead--
There were no birds to fly.
The Walrus and the Carpenter
Were walking close at hand;
They wept like anything to see
Such quantities of sand:
"If this were only cleared away,"
They said, "it would be grand!"
"If seven maids with seven mops
Swept it for half a year.
Do you suppose," the Walrus said,
"That they could get it clear?"
"I doubt it," said the Carpenter,
And shed a bitter tear.
"O Oysters, come and walk with us!"
The Walrus did beseech.
"A pleasant walk, a pleasant talk,
Along the briny beach:
We cannot do with more than four,
To give a hand to each."
The eldest Oyster looked at him,
But never a word he said:
The eldest Oyster winked his eye,
And shook his heavy head--
Meaning to say he did not choose
To leave the oyster-bed.
But four young Oysters hurried up,
All eager for the treat:
Their coats were brushed, their faces washed,
Their shoes were clean and neat--
And this was odd, because, you know,
They hadn't any feet.
Four other Oysters followed them,
And yet another four;
And thick and fast they came at last,
And more, and more, and more--
All hopping through the frothy waves,
And scrambling to the shore.
The Walrus and the Carpenter
Walked on a mile or so,
And then they rested on a rock
Conveniently low:
And all the little Oysters stood
And waited in a row.
"The time has come," the Walrus said,
"To talk of many things:
Of shoes--and ships--and sealing-wax--
Of cabbages--and kings--
And why the sea is boiling hot--
And whether pigs have wings."
"But wait a bit," the Oysters cried,
"Before we have our chat;
For some of us are out of breath,
And all of us are fat!"
"No hurry!" said the Carpenter.
They thanked him much for that.
"A loaf of bread," the Walrus said,
"Is what we chiefly need:
Pepper and vinegar besides
Are very good indeed--
Now if you're ready, Oysters dear,
We can begin to feed."
"But not on us!" the Oysters cried,
Turning a little blue.
"After such kindness, that would be
A dismal thing to do!"
"The night is fine," the Walrus said.
"Do you admire the view?
"It seems a shame," the Walrus said,
"To play them such a trick,
After we've brought them out so far,
And made them trot so quick!"
The Carpenter said nothing but
"The butter's spread too thick!"
"I weep for you," the Walrus said:
"I deeply sympathize."
With sobs and tears he sorted out
Those of the largest size,
Holding his pocket-handkerchief
Before his streaming eyes.
"O Oysters," said the Carpenter,
"You've had a pleasant run!
Shall we be trotting home again?'
But answer came there none--
And this was scarcely odd, because
They'd eaten every one.