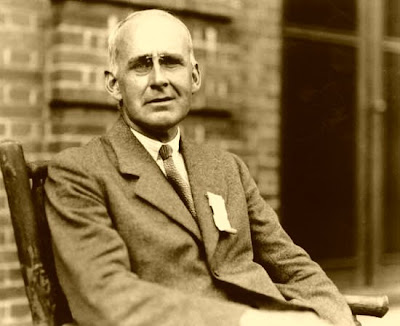 Relativity: The Special and General Theory--Einstein

"Report on the relativity theory of gravitation"--Eddington

Two expeditions were organized, one to Sobral in Brazil and the other including Sir Arthur Eddington, to the island of Principe off the west coast of Africa. At Principe there was a thunderstorm in the morning which cleared in time to take photographs, only two of which showed star images. At Sobral the clouds also cleared in time to make observations and 7 usable plates were obtained.

Confirmation of Einstein's Theory that predicted light was bent when it passes close to a massive body. MAYBE NOT...for this involved skewed data and perhaps an over zealous Eddington.

"Did Researchers Cook Data from the First Test of General Relativity?
Rumors of data mishandling in an historic eclipse study don't gibe"
by

Scientific American
On May 29, 1919, two British expeditions, positioned on opposite sides of the planet, aimed telescopes at the sun during a total eclipse. Their mission: to test a radical theory of gravity dreamed up by a former patent clerk, who predicted that passing starlight should bend toward the sun. Their results, announced that November, vaulted Albert Einstein into the public consciousness and confirmed one of the most spectacular experimental successes in the history of science.

In recent decades, however, some science historians have argued that astronomer Sir Arthur Eddington, the junior member of the 1919 expedition, believed so strongly in Einstein's theory of general relativity that he discounted data that clashed with it.

In 1919 general relativity was on the cusp of eclipsing Sir Isaac Newton's law of universal gravitation, put forth in 1687. Newton's law cast gravity as a type of bond between objects, all floating within the gridlike arena of space and time. Einstein's insight was that gravity is the grid, which is warped by massive objects such as the sun. As a consequence, light passing the sun should literally fall toward it like a moon rover clipping the edge of a giant crater and falling in.

Eddington, then director of the University of Cambridge Observatory, convinced his senior colleague and England's Astronomer Royal, Sir Frank Dyson, to mount the expedition. The group split into two teams: Dyson's crew from what was then the Royal Observatory in Greenwich headed to the town of Sobral, Brazil, as Eddington and cohorts set up on the western African island of Príncipe. Their task was to independently record the positions of the stars near the moon-blotted sun and compare them with the positions of the same stars at night.

If general relativity was right, the apparent positions of the nearest stars would drift 1.75 arc seconds (a measure of angularity) closer to its rim during the eclipse (a pencil width seen at half a mile). Eddington was hampered by overcast skies on the long-awaited day and photographed only five stars. It was too few for a solid result, but he gave some weight to his final value of 1.61 arc seconds.

Dyson's team had mixed results. One of the group's two telescopes functioned correctly and gave them a value of 1.98 arc seconds. The second instrument yielded a value of 0.93 arc second, which was rather close to the Newtonian prediction of 0.87. The instrument, however, had lost focus during the eclipse, which cast doubt on the accuracy of the photo comparison, so they excluded the measurement from their final result. Based on the remaining evidence, they declared general relativity triumphant.

Over time, experts looked askance at the sweeping conclusion, which both ignored the possibility that some other theory of gravity might have better fit the results and also didn't match general relativity very precisely after known sources of error were taken into account. "No experiment is decisive in the way that Eddington's experiment was presented as being decisive," says Harry Collins, a sociologist of science at Cardiff University in Wales. Indeed, researchers didn't truly nail the light-bending prediction until they used quasar measurements made in the 1960s, says physicist Clifford Will of Washington University in St. Louis, an expert in tests of general relativity.

Science historians John Earman, then at the University of Minnesota, and Clark Glymour of the University of Pittsburgh, revisited the eclipse study in a 1980 paper, concluding that Eddington had erred by suppressing the clashing Sobral result.

But the historical revision never received much scrutiny, physicist–historian Daniel Kennefick of the University of Arkansas Center for Space and Planetary Sciences in Fayetteville argues. "It's actually like you can see two myths layered on top of each other," he says.

To disentangle them, he dug into the historical record. Letters between Eddington and Dyson indicate that the two analyzed their data separately to avoid influencing each other, Kennefick reports in a recent paper. That means Dyson, who was at first ambivalent about Einstein's theory, made the initial judgment to exclude the 0.93–arc second result. Kennefick documents that Eddington acted properly when Dyson, presumably overeager at the potential discovery, put aside his first instinct and proposed averaging the three measurements to get a value that was closer to Einstein's prediction.

Eddington squelched the idea, because it would have meant giving added weight to the suspect measurement from Sobral. Biased or not, Eddington made the right call, says Kennefick, who discovered that Royal Observatory staff in Greenwich had reanalyzed the Sobral data in 1978 using modern computer-based methods. (The Príncipe data hadn't survived.) Their correction put the 0.93–arc second shift at 1.55 arc seconds, plus or minus 0.34—much closer to the 1.75 value. In other words, the researchers were right to suspect that the measurement was flawed.

"If I was in the same position, I would have done the same thing," says Washington University's Will, who adds that he never believed Eddington had cooked the numbers. "It just didn't seem credible to me that someone of his stature would throw out data because it didn't look right."


"Anomalies in the History of Relativity"

In November 1919 it was announced to the world that observations of a solar eclipse that occurred in May 1919 supported 1919 solar eclipse's general theory of relativity. That announcement was one of the most influential events of 20th-century science, since Einstein’s instant rise to enormous fame arose directly from it. In spite of the confidence with which the announcement was made, however, it was later realized that the accuracy of the observations was insufficient to constitute a reliable confirmation of the phenomenon that was predicted. Furthermore, another of the formulas published in the general theory, for the variation in the perihelion of the planet Mercury, had already been derived by another scientist several years earlier using another method. In spite of the fact that the experimental evidence for relativity seems to have been very flimsy in 1919, Einstein's enormous fame has remained intact and his theory has ever since been held to be one of the highest achievements of human thought. The resulting deification of Einstein has had some unfortunate effects: critics of his theory are often dismissed as cranks, and the search for better theories has been inhibited. It is suggested that the announcement of the eclipse observations in 1919 was not a triumph of science as it is often portrayed, but rather an obstacle to objective consideration of alternatives.
"Einstein, Eddington and the 1919 Eclipse"

The modern era of cosmology began with the publication of Einstein’s general theory of relativity in 1915. The first experimental test of this theory was Eddington’s famous expedition to measure the bending of light at a total solar eclipse in 1919. So famous is this experiment, and so dramatic was the impact on Einstein himself, that history tends not torecognize the controversy that surrounded the results at the time. In this paper I discuss the experiment in its historical and sociological context and show that it provides valuable lessons for modern astronomy and cosmology.
"Judging Einstein"

Relativity Theory of Protons and Electrons

Space, Time and Gravitation : An Outline of the General Relativity Theory

Stellar Movements and the Structure of the Universe