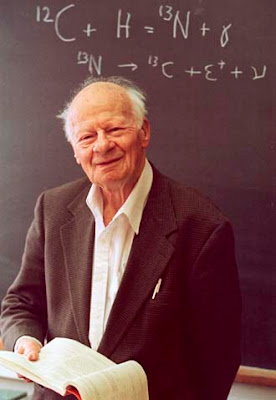 Theoretical physicists come in two varieties: deep thinkers and problem solvers. Hans Bethe was the supreme problem solver of the past century. He was not a deep thinker like Heisenberg and Dirac, who laid the foundations of modern physics in the 1920s. But he took their theories and made them into practical tools for understanding the behavior of atoms, stars, and everything in between. He might have described his contribution to science with the words that Isaac Newton used to introduce the third and final volume of his Principia Mathematica: “It remains that, from the same principles, I now demonstrate the frame of the system of the world.” Bethe demonstrated how quantum theory can explain phenomena as diverse as the supernova explosions of stars in the sky, the multiplication of cosmic-ray showers in the atmosphere, and the fine structure of the energy levels in the microwave spectrum of a hydrogen atom. He wrote a comprehensive review of nuclear physics and demonstrated how nuclear reactions keep the Sun and the stars shining. In 1967, he was awarded the Nobel Prize for physics for his work on the Sun and stars. But his studies of the energy levels of hydrogen were at least as important and even more fundamental, demonstrating the effects of quantum fluctuations of the electromagnetic field on the dynamics of atoms. His 1947 paper on the hydrogen atom was only three pages long, but it set the style for theoretical calculations in particle physics for the next 50 years. On Bethe’s desk at Cornell University, where he lived and taught for almost 70 years, there was always a pad of paper that he used for calculations. His door was usually open; students and colleagues came in constantly to discuss a wide variety of problems. Bethe would instantly switch his attention from his own problem to theirs. As soon as they left the room, he would instantly switch his attention back and continue his calculation where he had left off. He continued to pour out a stream of research papers while carrying a full load of teaching and administrative duties and supervising an army of graduate students. When I was one of his graduate students, he came every day to eat lunch with us at the student cafeteria, sharing our problems and telling stories of his adventures in Germany and in Los Alamos. We learned even more at the lunches than we did at his lectures. Everyone called him Hans. He told us that one of the best things about moving from Germany to America was that nobody in America called him “Herr Professor.” Bethe remained active as a physicist, doing calculations and publishing papers, well into his nineties. From the age of 70 to the age of 95, he enjoyed a fruitful collaboration with Gerald Brown, working out theories of supernova explosions and gammaray bursts. Brown has published a delightful account of the collaboration, with the title “Fly with Eagles”. Brown says, “I had to wait until he was more than 70 years old in order to have any chance of keeping up with him. He worked like a bull-dozer, heading directly for the light at the end of the tunnel.” The last time I talked with Bethe, he said, “It is a shame. Now I am 98 and I cannot be as active as I was when I was 90.” Bethe carried in his head all the numbers that play an important role in physics or in engineering. Given any question, he could estimate a numerical answer with lightning speed. His estimates were amazingly accurate. He put this skill to good use when he helped Robert Wilson to design a succession of particle accelerators at Cornell. The same skill made him an ideal leader for the theoretical division at Los Alamos, designing the first atomic bomb during World War II and helping to design the first hydrogen bomb in 1952. For the 60 years that he lived after 1945, he worked hard to educate the public about the facts of nuclear weaponry and the impossibility of winning a nuclear war. He was actively engaged in fighting for arms-control treaties and against escalations of the arms race. At the age of 90, he wrote in a letter to President Clinton: “The time has come for our nation to declare that it is not working, in any way, to develop further weapons of mass destruction of any kind.…You might consider making a suitable pronouncement along these lines, to discipline the bureaucracy, and to reassure the world that America is vigilant in its desire to ensure that new kinds of nuclear weapons are not created.” Now that he is dead, it is up to us to continue the good fight that he fought for nuclear sanity, moderation, and common sense.

Here are three lectures by Hans Bethe of Cornell University who died in 2005. He discusses the history and content of quantum mechanics. There is an introduction and conclusion by Silvan S. Schweber and Edwin E. Salpeter.

From Cornell University here is a twenty minute production [1995] regarding Hans Bethe's relationship with that university.

"I Can Do That: Hans Bethe's First 60 Years at Cornell"

"Writing the Biography of a Living Scientist: Hans Bethe"

And from the SLAC [Stanford Linear Accelerator Center] colloquia series:

"Day After Trinity: Oppenheimer and the Atomic Bomb"

On October 31st at 4:00 pm in Panofsky Auditorium SLAC’s Colloquium Series will present the exceptional Oscar-nominated documentary The Day After Trinity. The film offers invaluable insight into historic events which have forever changed the face of our world – this screening should not to be missed.

After witnessing the tremendous destructive power of the atomic bomb, J. Robert Oppenheimer declared “I have become death”. Still topically relevant a quarter of a century since its release, Director Jon Else’s documentary uses interviews, archival footage, and narration to reveal the internal landscape of the man whose leadership at Los Alamos, New Mexico, defined the rise of the Manhattan Project and the beginning of the Atomic Age.

The Day After Trinity traces the unexpected path of Oppenheimer’s career - from his formation of the Los Alamos colony and the first successful atomic bomb detonation at the Trinity test site in 1945, to his final years spent branded as a security risk and excluded from the atomic energy research he pioneered due to his opposition to the development of the Hydrogen bomb.

The full movie is about 90 minutes long.


Pief Panofsky who was present at the Trinity Test in July of 1945 will make a few remarks about the past and the future of nuclear weapons, and answer questions, if desired.

"Day After Trinity: Oppenheimer and the Atomic Bomb"