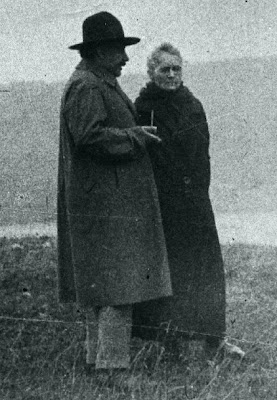 Albert Einstein and Marie Curie
"When I examine myself and my methods
of thought, I come close to the conclusion that the
gift of fantasy has meant more to me than my talent
for absorbing positive knowledge."

This can either be a sincere humble statement by one of the world's most famous men and/or an affirmation of an unwritten criterion of scientific methodology. Anecdotical material spans many centuries from a cry by Archemedes from the streets of Syracuse--Eureka!--[relationship between volume and displacement] to Newton and the loose apple [gravity]. And I am sure there are many similar unrecorded instances of equal inspiration. Imagination is certainly one of those unquantifiable characteristics of mankind embracing just about every feature of mankind--science not being excluded. Einstein certainly employed the "what if" attitude and as stated placed a higher value on inspiration than knowledge accumulation. Imagine a collection of imaginative thinkers--thus "think tanks", editorial boards, and endless committees. Humm--just another wonderful feature of the cognitive process yielding unlimited results.

This whole concept of "imagination" [say, the "creative" process] is quite fascinating in the formulation of something novel. And certainly the whole process is not constricted to the realm of the sciences. i.e., art, music, literature, etc. I suspect there are numerous individual methodologies that can and do contribute to the creative process—some socially acceptable and some not acceptable. And certainly, respective individual mental dispositions do play a role. Age may well be a factor too. Is it feasible that "reason" is suspended and the mind wanders into uncharted realms of neuron relationships? Maybe "daydreaming" is significant.

I was going through some back issues of Smithsonian and discovered an article about renaissance man Ralph Waldo Emerson and the romantic notion that Emerson antedated the likes of Erwin Schrödinger, Albert Einstein, the propagators of quarks, and the "Big Bang" hypothesis. That's an eighty year spread. Emerson wrote in his essay "Nature" ..."Compound it how she will, star, sand, fire, water, tree, man, it is still one stuff, and betrays the same properties," and "Without electricity the air would rot." Such foresight is not uncommon as seen by H. G. Wells, Jules Verne, or the Star Trek writers, but is it a "good guess", future serendipity, coincidence, keen insight? Is something unexplained here in that some individuals can [albeit by poetry or prose] intimate future generalized hypotheses and theories?

"So many of his witnesses observed the utter freedom of his flights of thought, yet when Feynman talked about his own methods not freedom but constraint ... For Feynman the essence of scientific imagination was a powerful and almost painful rule. What scientists create must match reality. It must match what is already known. Scientific creativity, he said, is imagination in a straitjacket ... The rules of harmonic progression made for Mozart a cage as unyielding as the sonnet did for Shakespeare. As unyielding and as liberating - for later critics found the creator's genius in the counterpoint of structure and freedom, rigour and inventiveness."--James Gleick

"If you're teaching a class, you can think about the elementary things that you know very well. These things are kind of fun and delightful. It doesn't do any harm to think them over again. Is there a better way to present them? The elementary things are easy to think about; if you can't think of a new thought, no harm done; what you thought about it before is good enough for the class. If you do think of something new, you're rather pleased that you have a new way of looking at it."--Richard Feynman