I am showing my age now and beginning to see the passing of those that had a significant impact on me be they in literature, philosophy, or science. Mr. Wizard had a huge impact on me as a youth and directed my interests towards the sciences. But I did a slight betrayal and shifted towards the philosophy of science. No harm had been done. Mr. Wizard and I started with basic household goodies usually found in the kitchen, under the sink, in my father's workshop, and the spooky detached garage. We did the simple and easy to understand basics and after a summer of mowing yards, I graduated to the penultimate A. C. Gilbert chemistry set--$15.00 plus tax. Subsequent trips to the city laboratory supply houses and a note from my parents, I grew and grew in the acquisition of chemicals and equipment: Concentrated acids, strong alkalis, colorful chemicals, and coveted glass water condensers and retorts. Quite sad that mentors like Don Herbert are few. I am sure that I have been forgiven for not following the hardcore sciences. 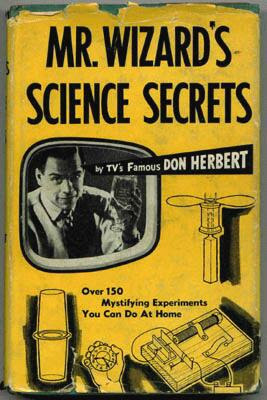 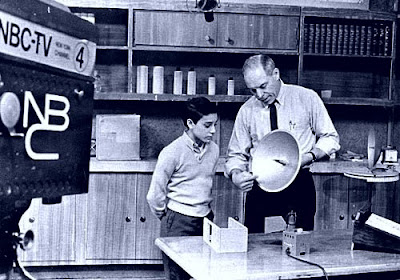 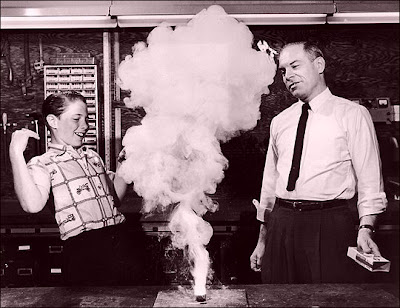 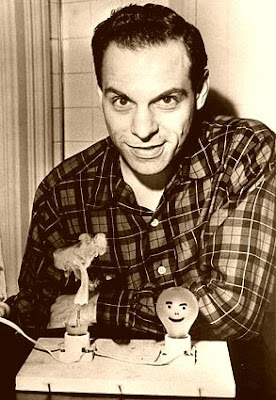 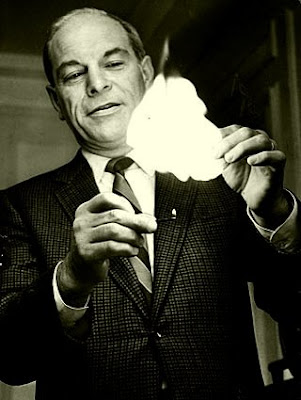 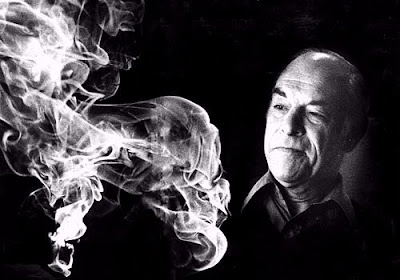 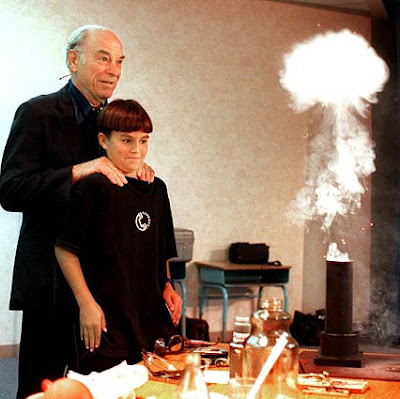 Don Herbert, who unlocked the wonders of science for youngsters of the 1950s and '60s as television's Mr. Wizard, died yesterday at his home in the Bell Canyon section of Los Angeles. He was 89.

The cause was bone cancer, his son-in-law Tom Nikosey told The Associated Press in confirming the death.

Mr. Herbert held no advanced degree in science, he used household items in his TV lab, and his assistants were boys and girls. But he became an influential showman-science teacher on his half-hour "Watch Mr. Wizard" programs, which ran on NBC from 1951 to 1965.

Millions of youngsters may have been captivated by Howdy Doody and the Lone Ranger, but many were also conducting science experiments at home, emulating Mr. Wizard.

After his children's program went off the air, Mr. Herbert remained a presence in TV science programming with general-audience shows like "How About" and "Exploration." NBC revived "Watch Mr. Wizard" for one year in the early '70s. In the 1980s Mr. Herbert reprised his children's shows with "Mr. Wizard's World" on the Nickelodeon cable network. He became something of a TV celebrity beyond his lab as a guest of Johnny Carson, David Letterman and Regis Philbin and a panelist on "Hollywood Squares."

Working in shirtsleeves on his TV laboratory set, Mr. Herbert aroused the curiosity of children in an informal way that turned sometimes arcane scientific conceptions into fun. "What was really remarkable about Mr. Wizard was that he talked to the kids as if they were real people," said Frank Wilczek, a physicist at the Institute for Advanced Studies in Princeton, N.J., in a 1990 interview while recounting informal approaches to teaching science.

During the 1960s and '70s, about half the applicants to Rockefeller University in New York, where students work toward doctorates in science and medicine, cited Mr. Wizard when asked how they first became interested in science.

Donald Jeffry Herbert was born in Waconia, Minn. He took part in dramatic productions at La Crosse State Teachers College of Wisconsin. After graduating in 1940 with a degree in English and general science, he acted opposite Nancy Davis, the future Nancy Reagan, in summer stock.

After service as a bomber pilot in Europe during World War II, he worked as an actor, model and radio-show writer in Chicago, then developed "Watch Mr. Wizard," which made its debut in 1951 on WMAQ-TV, the NBC affiliate in Chicago. The program later originated in New York and was eventually carried by more than 100 stations.

Although Mr. Herbert had some scientific knowledge from his college studies, "everything on the show I learned by doing it," he once said. He accumulated 18 file cabinets filled with notes.

His hallmark was the use of common objects to illustrate scientific principles. He cut out sections of paper plates to illustrate an optical illusion, ran smoke through a soda straw to make air currents visible and shined a flashing light to represent the strength of radiation.

"If you used scientific equipment that's strange to the child, it's not going to help him or her understand," Mr. Herbert told the Voice of America's "Our World" program in 2006. "So we used everyday equipment."

Mad magazine and the comedic pairing of Bob and Ray spoofed Mr. Herbert, to his delight. In fact, his experiments sometimes did go awry.

"Once I was supposed to pour two colorless fluids into a glass, and by the count of five the fluid was supposed to turn black," he once recalled. "It was a complicated experiment in which many factors, like temperature and acidity, had to be just right for the fluid to turn black. Well, I think I counted to 20 before it changed. But even when things went wrong, we would always explain why."

Mr. Herbert continued to spread knowledge of science in his final years, reprising his original shows on DVDs.

He is survived by his wife, Norma, and six children and stepchildren.

Mr. Herbert was complemented by the youngsters he recruited to help with the experiments. One of them, Rita McLaughlin, Mr. Herbert's sidekick at age 14, became a soap-opera actress.

"What really did it for us was the inclusion of a child," Mr. Herbert told The St. Louis Post-Dispatch in 2004. "When we started out, it was just me up there alone. That was too much like having a professor give a lecture. We cast a boy and a girl to come in and talk with me about science. That�s when it took off."

Mr. Herbert once said in an interview how "all the kids were just terrific, but they ideally had to be around 11 or 12. Once they got beyond 13, they became know-it-alls."

Asked why he didn't use his own children on his programs, Mr. Herbert replied, "Because then I couldn't fire them."

And this from Bill Nye:

A few hours after being the first person to receive the Committee for Elementary Science International's Science Advocate Award and a standing ovation from a thousand science teachers, Don Herbert was asked to pull a water-balloon into a bottle. He used one of his old tricks. As a science educator, he knew them all. And as Mr. Wizard, he'd shown them to the world. 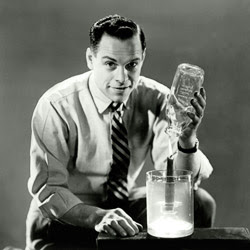 Don Herbert
circa 1950
Mr. Wizard was television's original science teacher, the first guy to use television to teach. His relaxed manner and the quality of his demonstrations made him a household word. David Letterman had him on his first show, because Letterman grew up with Watch Mr. Wizard. Don Herbert's techniques and performances helped create the United States's first generation of homegrown rocket scientists just in time to respond to Sputnik. He sent us to the Moon. He changed the world.

When you watched Mr. Wizard, it was as though you were visiting him at home. At the start of each show, a kid just like you would stop by his house and together the three of you (it felt like you were right there with him) would go through a series of household science demonstrations. Looking back, these might seem simple, but they were elegant. Their apparent simplicity rendered them all the more compelling--we all just had to see what happened.

Mr. Wizard stood eggs on end, hammered nails with cryogenic bananas, and graphed shrinking gasses on their way to absolute zero long before any else did. He threw a switch and the bathroom lights came on, but so did the bathtub spigot. Wow, water and electricity can safely mix--if you know the science behind them. It was all fun, because it was all fascinating.

Younger viewers might never have heard of Mr. Wizard except in a passing reference by the band Smash Mouth. Well, he's the no hocus-pocus close-up guy they were talking about. If you're not hip, you might as well be walking on the Sun. (Not possible--astronomical science.)

If you think about it, your favorite and most influential teachers were or are performers. When they get up in front of the class, they've got something to say, and they present with style, the way a comedian delivers material. So did low-key Don. 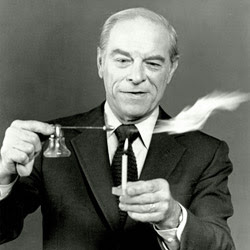 When he started out in the 1950s and 1960s on live television and film, he was the groundbreaker. Later he recreated his show with Mr. Wizard's World on video in Canada in the 1980s. When science educators started throwing around terms like "discrepant event," "heuristic determinism," and "counterintuitive," Don was just intuitive. He knew how to get it all across. Although he aged, he stuck to his approachable yet challenging style. He remained true to his code. Show, then, tell--the essence of science education.

As an informal (non-classroom) educator, I grew up loving Mr. Wizard and then later studying his moves. If any of you reading now have been surprised and happy to learn a few things about science watching Bill Nye the Science Guy, keep in mind, it all started with Don Herbert.

With his beautiful trophy on the countertop beside him, Mr. Wizard patiently obliged the crowd. With a swatch of flaming paper, he partially evacuated the bottle. When the fire burned out, atmospheric pressure pushed that balloon right in, as if by magic. But of course, it wasn't magic. And in a sense, it's not even a trick. To him and his millions of viewers, it was a predictable outcome--a consequence of science.

In case you're wondering, the balloon doesn't get sucked in because the oxygen is gone and thereby there is more room in the jar or bottle. It's just that there�s less gas left after the hot fire has caused it to expand and escape. While the crowd breathed the smell of wet ash, someone challenged him to get the balloon back out. He did, using what he liked to call in his now grandfatherly way a "headache tablet" (fizzy seltzer pill) and water. Simple, if you know the science. You know how I came to know all this? Mr. Wizard showed me.

Thanks Don; you changed the world.

Copyright 1992-2006 Skeptics Society
"Now, about that volcano Mr. Wizard...do you have some potassium nitrate you can spare?"