Historical event in 1942 at the University of Chicago 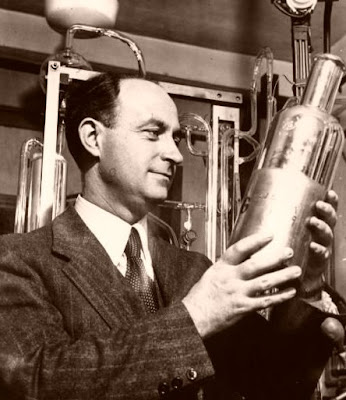 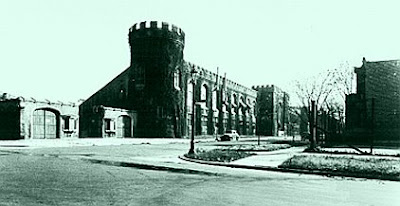 "The problems posed by this world situation are not for the scientist alone but for all people to resolve. Perhaps a time will come when all scientific and technical progress will be hailed for the advantages that it may bring to man, and never feared on account of its destructive possibilities."
This is the last entry by Enrico Fermi describing the first controlled and self-sustaining nuclear chain reaction at the University of Chicago in 1942. Good thoughts and intentions repeated by many with little fruition. I wonder if Alfred Nobel said something similar with the introduction of nitroglycerine?

It is ten years since man first achieved a self-sustaining atomic reaction.

Many people link this event only with the development of the atomic bomb and the subsequent efforts to develop the hydrogen bomb, reference to which has been made in the last few days by the Atomic Energy Commission.

The history of the first self-sustaining nuclear chain reaction, like that of all scientific achievements, begins with man's first philosophical speculations about the nature of the universe. Its ultimate consequences are still unpredictable.

The sequence of discoveries leading to the atomic chain reaction was part of the search of science for a fuller explanation of nature and the world around us. No one had any idea or intent in the beginning of contributing to a major industrial or military development.

A partial list of the main stepping-stones to this development indicates many countries contributed to it.

The story begins in Paris in 1896 when Antoine Henri Becquerel discovered the existence of radioactive elements; that is, elements which spontaneously emit invisible, penetrating rays. Two years later, also in Paris, Pierre and Marie Cure discovered radium, for many years the best known of the radioactive elements.

In Zurich, Switzerland, in 1905, Albert Einstein announced his belief that mass was equivalent to energy. This led to speculation that one could be transformed into the other.

A most important discovery came in 1912 when Ernest Rutherford discovered the minute but heavy nucleus which forms the core of the atom. In ordinary elements this core is stable; in radioactive elements it is unstable.

Shortly after World War I, the same Rutherford achieved for the first time the artificial disintegration of the nucleus at the center of the nitrogen atom.

During the next decade, research progressed steadily, if unspectacularly. Then, in 1932, came a series of three discoveries by scientists working in three different countries which led to the next great advance.

Walter Bothe in Germany, and Frederic Joliot-Curie in Paris prepared the ground work that led James Chadwick of England to the discovery of the neutron. The neutron is an electrically neutral building block of the nuclear structure. The other build block is the positively charged proton.

The next step was taken in Rome in 1934. In experiments in which I was concerned it was shown that these neutrons could disintegrate many atoms, including those of uranium. This discovery was to be directly applied in the first atomic chain reaction eight years later.

The Discovery of Fission

The final stepping-stone was put in place in Berlin when Otto Hahn, working with Fritz Strassman, discovered fission or splitting of the uranium atom. When Hahn achieved fission, it occurred to many scientists that this fact opened the possibility of a form of nuclear (atomic) energy.

The year was 1939. A world war was about to start. The new possibilities appeared likely to be important, not only for peace but also for war.

A group of physicists in the United States‹including Leo Szilard, Walter Zinn, now director of Argonne National Laboratory, Herbert Anderson, and myself‹agreed privately to delay further publications of findings in this field.

We were afraid these findings might help the Nazis. Our action, of course, represented a break with scientific tradition and was not taken lightly. Subsequently, when the government became interested in the atom bomb project, secrecy became compulsory.

Here it may be well to define what is meant by the "chain reaction" which was to constitute our next objective in the search for a method of utilizing atomic energy.

An atomic chain reaction may be compared to the burning of a rubbish pile from spontaneous combustion. IN such a fire, minute parts of the pile start to burn and in turn ignite other tiny fragments. When sufficient numbers of these fractional parts are heated to the kindling points, the entire heap bursts into flames.

A similar process takes place I an atomic pile such as was constructed under the West Stands of Stagg Field at The University of Chicago in 1942.

The pile itself was constructed of uranium, a material that is embedded in a matrix of graphite. With sufficient uranium in the pile, the few neutrons emitted in a single fission that may accidentally occur strike neighboring atoms, which in turn undergo fission and produce more neutrons.

These bombard other atoms and so on at an increasing rate until the atomic "fire" is going full blast.

The atomic pile is controlled and prevented from burning itself to complete to complete destruction by cadmium rods which absorb neutrons and stop the bombardment process. The same effect might be achieved by running a pipe of cold water through a rubbish heap; by keeping the temperature low the pipe would prevent the spontaneous burning.

The atomic chain reaction was the result of hard work by many hands and many heads. Arthur H. Compton, Walter Zinn, Herbert Anderson, Leo Szilard, Eugene Wigner and many others worked directly on the problems at The University of Chicago. Very many experiments and calculations had to be performed. Finally a plan was decided upon.

Thirty "piles" of loss than the size necessary to establish a chain reaction were built and tested. Then the plans were made for the final test of a full-sized pile.

The scene of this test at The University of Chicago would have been confusing to an outsider‹if he could have eluded the security guards and gained admittance.

He would have seen only what appeared to be a crude pile of black bricks and wooden timbers. All but one side of the pile was obscured by a balloon cloth envelope.

As the pile grew toward its final shape during the days of preparation, the measurement performed many times a day indicated everything was going, if anything, a little bit better than predicted by calculations.

The Gathering on the Balcony

Finally, the day came when we were ready to run the experiment. We gathered on a balcony about 10 feet above the floor of the large room in which the structure had been erected.

Beneath us was a young scientist, George Weil, whose duty it was to handle the last control rod that was holding the reaction in check.

Every precaution had been taken against an accident. There were three sets of control rods in the pile. One set was automatic. Another consisted of a heavily weighted emergency safety held by a rope. Walter Zinn was holding the rope ready to release it at the least sign of trouble.

The last rod left in the pile, which acted as starter, accelerator and brake for the reaction, was the one handled by Weil.

Since the experiment had never been tried before, a "liquid control squad" stood ready to flood the pile with cadmium salt solution in case the control rods failed. Before we began, we rehearsed the safety precautions carefully.

Finally, it was time to remove the control rods. Slowly, Weil started to withdraw the main control rod. On the balcony, we watched the indicators which measured the neutron count and told us how rapidly the disintegration of the uranium atoms under their neutron bombardment was proceeding.

At 11:35 a.m., the counters were clicking rapidly. Then, with a loud clap, the automatic control rods slammed home. The safety point had been set too low.

It seemed a good time to eat lunch.

During lunch everyone was thinking about the experiment but nobody talked much about it.

At 2:30, Weil pulled out the control rod in a series of measured adjustments.

Shortly after, the intensity shown by the indicators began to rise at a slow but ever-increasing rate. At this moment we knew that the self-sustaining reaction was under way.

The even was not spectacular, no fuses burned, no lights flashed. But to us it meant that release of atomic energy on a large scale would be only a matter of time.

The further development of atomic energy during the next three years of the war was, of course, focused on the main objective of producing an effective weapon.

At the same time we all hoped that with the end of the war emphasis would be shifted decidedly from the weapon to the peaceful aspects of atomic energy.

We hoped that perhaps the building of power plants, production of radioactive elements for science and medicine would become the paramount objectives.

Unfortunately, the end of the war did not bring brotherly love among nations. The fabrication of weapons still is and must be the primary concern of the Atomic Energy Commission.

The problems posed by this world situation are not for the scientist alone but for all people to resolve. Perhaps a time will come when all scientific and technical progress will be hailed for the advantages that it may bring to man, and never feared on account of its destructive possibilities.