This in essence is a question of epistemology and the truth of the knowledge of what is presented to us via terrestrial and "in space" instruments that provide us photographs of objects beyond Earth. I vacillate between the Spitzer and Hubble images for one day Hubble provides a cool image and then is replaced by one from Spitzer. Okay, both provide good images. In spite of the data gleaned and the hypotheses formed, the question I have is in the "representation" of the images. Often, the caption will read as in the above image--"This false-color image from NASA's Spitzer Space Telescope shows a dying star (center) surrounded by a cloud of glowing gas and dust." "False-color"? At the bottom of the captioned image is a small technical statement: "This image composite was taken on Dec. 6, 2003, by Spitzer's infrared array camera, and is composed of images obtained at four wavelengths: 3.6 microns (blue), 4.5 microns (green), 5.8 microns (orange) and 8 microns (red)." Okay, this is somewhat like the four color engraving printing process of days of old when separation negatives were made: Yellow, red, blue, and black--each separation negative run through the printing press in succession yielding a full color print. [This process is akin to the old Tri-color Technicolor motion picture film process and the early Eastman Kodak Kodachrome process--the "dye transfer" method.] Now the question is, is this done strictly by computer manipulation and who is responsible for adjusting the hue and intensity that produces these fantastic images? Isn't that methodology subjective? It verges on "art"...and that after all is a matter of preference. I think we assume that what we are shown is what actually exists [color wise] and that is the problem of epistemology for it is wrong as a source of knowledge. I'll grant that the space enhanced photographs are spectacular to view, but it does also represent a false source of epistemology and I bet that most people asume that what they witness is true of the objects representation.

Taking color pictures with the Hubble Space Telescope is much more complex than taking color pictures with a traditional camera. For one thing, Hubble doesn't use color film - in fact, it doesn't use film at all. Rather, its cameras record light from the universe with special electronic detectors. These detectors produce images of the cosmos not in color, but in shades of black and white.

Finished color images are actually combinations of two or more black-and-white exposures to which color has been added during image processing.

The colors in Hubble images, which are assigned for various reasons, aren't always what we'd see if we were able to visit the imaged objects in a spacecraft. We often use color as a tool, whether it is to enhance an object's detail or to visualize what ordinarily could never be seen by the human eye.

Color in Hubble images is used to highlight interesting features of the celestial object being studied. It is added to the separate black-and-white exposures that are combined to make the final image.

Creating color images out of the original black-and-white exposures is equal parts art and science.

1.) To depict how an object might look to us if our eyes were as powerful as Hubble
2.) To visualize features of an object that would ordinarily be invisible to the human eye
3.) To bring out an object's subtle details.

Light from astronomical objects comes in a wide range of colors, each corresponding to a particular kind of electromagnetic wave. Hubble can detect all the visible wavelengths of light plus many more that are invisible to human eyes, such as ultraviolet and infrared light.

Astronomical objects often look different in these different wavelengths of light. To record what an object looks like at a certain wavelength, Hubble uses special filters that allow only a certain range of light wavelengths through. Once the unwanted light has been filtered out, the remaining light is recorded.

Hubble's many filters allow it to record images in a variety of wavelengths of light. Since the cameras can detect light outside the visible light spectrum, the use of filters allows scientists to study "invisible" features of objects - those only visible in ultraviolet and infrared wavelengths.

Many full-color Hubble images are combinations of three separate exposures - one each taken in red, green, and blue light. When mixed together, these three colors of light can simulate almost any color of light that is visible to human eyes. That’s how televisions, computer monitors, and video cameras recreate colors. 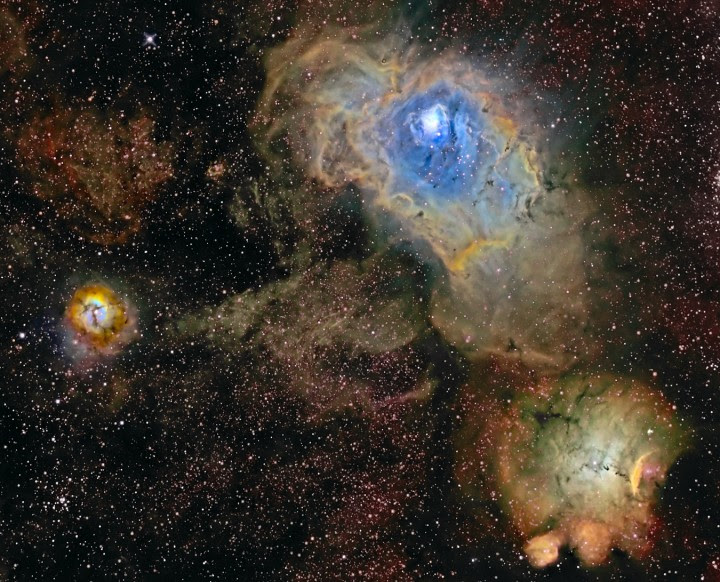 Three Nebulae in Narrow Band
Narrow band filters and a false-color palette give these three nebulae a stunning appearance against the cosmic canvas of the central Milky Way. All three are stellar nurseries about 5,000 light-years or so distant, toward the nebula rich constellation Sagittarius. In the 18th century, astronomer Charles Messier cataloged two of them; colorful M8, above and right of center, and compact M20 at the left. The third, NGC 6559, is at bottom right. Over a hundred light-years across, M8 is also known as the Lagoon Nebula. Divided by obscuring dust lanes, M20's popular moniker is the Trifid. In the composite image, narrow emission lines from sulfur, hydrogen, and oxygen atoms recorded through the filters, are mapped into broader red, green, and blue colors respectively. The color scheme was made popular in Hubble Space Telescope images. But for ground-based telescopes, narrow band filters also make it possible to reject overwhelming light-pollution and capture compelling images of the cosmos from urban skies.

Most of the false color deep space images are representing wavelengths we cannot see. Without them astrophotography would appear flat.