The value of a small amount of knowledge of science 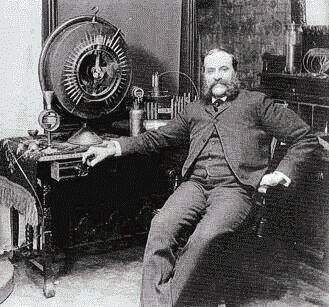 "John Ernst Worrell Keely was born on September 3rd, 1827 and died November 18th, 1898. He was considered a fraudulent American inventor. In 1873 he announced that he had discovered a new physical force that, if harnessed, would produce unheard-of power. He claimed, for example, to be able to produce from a quart of water enough fuel to move a 30-car train from Philadelphia to New York City. He began construction of an engine to perform this feat and by 1874 was able to give preliminary demonstrations of his machine. He made a great show of guarding the secret of the motor he was developing to obtain power "from intermolecular vibrations of ether". Scientists and engineers scoffed at his unverified claims. Keely came up with what he claimed was a hydro-pneumatic pulsating vacuo engine, which the press labelled as a perpetual motion machine. According to Keely, harmonics were involved, which he read about in F. J. Hughes Harmonies of Tones and Colours. However, as he could never explain exactly how the machine worked, the Public eventually turn against him and he was denounced as a fake and a fraud. After Keely died on Nov. 18, 1898, suspicious skeptics and newspaper reporters did a careful examination of his laboratory. Some of Keely's machinery had already been removed by "believers" who hoped they could make it work. The inexhaustible source of power he claimed to have discovered, "The Etheric Force" or "Molecular Motion of Energy", was, it turned out, nothing but compressed air. The "Hydro-Pneumo-Pulsating-Vacuo-Motor", and other mysterious engines such as the "Compound Disintegrator" and the "Sympathetic Negative Attractor", had all been powered by a large cast iron hollow sphere carefully hidden in the cellar floor beneath Keely's workrooms. False ceilings and floors were ripped up to reveal mechanical belts and linkages to a silent water motor in the basement (two floors below the laboratory). A system of pneumatic switches under the floor boards could be used to turn machinery on and off. A three-ton sphere was found in the basement, apparently a reservoir for compressed air. The walls, ceilings and even apparently solid beams were found to have hidden pipework."

ISSUED BY THE U.S. PATENT OFFICE
REGARDING APPLICATION OF PATENTS FOR
"PERPETUAL MOTION" DEVICES

"The views of the Patent Office are in accord with those scientists who have investigated the subject and are to the effect that such devices are physical impossibilities. The position of the Office can only be rebutted by a working model. ... The Office hesitates to accept fees from applicants who believe they have discovered Perpetual Motion, and deems it only fair to give such applicants a word of warning that fees cannot be recovered after the case has been considered by the Examiner"


So far, neither the "first law of thermodynamics" [the energy of an isolated system is constant] nor the "second law of thermodynamics" [the entropy of an isolated system increases in the course of a spontaneous change]. These are true stories of inventors/scientists that "really" believe in their product despite the laws of physics or are out for an adventure in fraud to separate individuals, corporations, governments of their monies. I offer this topic to illustrate that just a little bit of the basics of science can thwart charlatans and keep one's money in one's pocket. Despite inventor’s failures and ulterior motives, the devices and ideas are interesting.

"In 1880 John Gamgee invented an engine - the zero motor - in which heat from the surroundings boiled liquid ammonia which drove a piston. Expansion then was supposed to result in spontaneous condensation, the liquid ammonia returning to a reservoir to complete the cycle. Gamgee was probably sincere, and managed to persuade the Chief Engineer of the US Navy of its potential use. This was at a time when it was not clear where the USA would find sufficient coal to fuel its growing fleet. The Secretary of State for the Navy, and even President Garfield inspected the motor. The problem is, of course, that the gas needs to be cooled below the temperature of the ambient air, to cause it to condense (in fact to -33 degrees centigrade). This would require more energy than was obtained from the piston stroke."

"The Museum of Unworkable Devices" 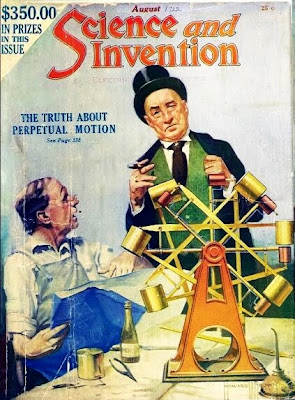 I had an uncle who worked for years on a perpetual motion machine...actually it was was driven by a car's force traversing roads by converting energy derived from the shocks once the car had attained a speed via gasoline power. alas when he died so did the efforts....however it is the inquiring human mind that is important here and not fraud as your blog explores. Frauds will always be exposed because in the end if it fails to produce said energy the only losers are duped investors and that it the "mark" these frauder's are seeking.