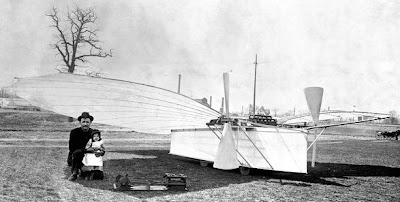 "The family had the Wright Flyer moved to the Smithsonian at the end of 1948, but not before insisting that a contract be drawn up naming the brothers as the undisputed first in flight. The contract specifically states that, should the Smithsonian recognize anyone else as being first—or having built a flying machine before the brothers did—the family will promptly remove the Flyer from the museum."

An iconic piece of American history took a nosedive when the 100th-anniversary issue of an annual aviation bible known as Jane's All the World's Aircraft displaced the Wright brothers as the first fathers of flight.

The new name in town is Gustave Whitehead, a German-born inventor many have long believed took to the air more than two years before Orville and Wilbur even left the ground at Kitty Hawk on December 17, 1903.

But while new research from an Australian aviation expert convinced Jane's editors it was time to update the books, the Smithsonian National Air and Space Museum in Washington, D.C.—home to the original Wright Flyer—remains skeptical about Whitehead's work, which it views as mostly myth. The Aeronautics Division's senior curator—author and Wright expert Dr. Tom Crouch—believes Jane's was "hoodwinked."

Still, longtime Whitehead supporters are elated about the latest development. Many think the Smithsonian's indebtedness to the Wrights' legacy—which it even holds in contract with the brothers' heirs—prevents the institution from acknowledging the indisputable facts of Whitehead's pioneering work.

John Brown, an Australian flight historian, was responsible for swaying Jane's. Ironically, it was while researching a documentary on "flying cars" for the Smithsonian Channel—and working directly with Crouch—that Brown came across a large amount of previously overlooked data on Whitehead.

"There were a huge number of discoveries," Brown said, including newspaper accounts stating that Whitehead may have been flying as early as 1897—six years before the Wright brothers. "The history of Whitehead needs to be completely rewritten," Brown asserted.

He also believes that photographic enhancements confirm that a long-missing picture of Whitehead actually flying his plane in Fairfield, Connecticut, on August 14, 1901—a lithograph of which was published at that time in the Bridgeport Herald—can be seen on the wall of an aviation exhibit in a 1906 photo taken by William Hammer.

That photo is, in fact, part of the Smithsonian's Hammer Collection archives. Brown said he was denied access to it. But he enhanced a print of it he discovered at the Aviation Pioneer Gustav Weisskopf Museum in the aviator's hometown of Leutershausen, Germany (where Whitehead was born Gustav Weisskopf).

"It's a very simple open-and-shut case, really," said Brown, who's currently in Germany preparing a documentary on the life of Whitehead.

"The issue is: Did Gustave Whitehead fly or didn't he fly? Did he have the means? Did he have the motive?"
Brown calls it "indisputable," based on the man's professional background in aeronautics, the documented evidence of the number of airplane motors Whitehead created and sold, affidavits signed by eyewitnesses who saw him fly, newspaper accounts, and more.

Around 1914, the Smithsonian gave aviation history a black eye when it declared Samuel Pierpont Langley, one-time secretary of the museum, to be the first person to build a successful flying machine.

Oddly enough, Langley was already dead at that point, but the museum's then director Charles Walcott—a close friend—attempted to bring him posthumous recognition by having his failed airplane design reconstructed (and soundly reinforced) so it could be successfully test-flown.

When the museum named Langley as the first to create a flying machine, Orville—the surviving brother—had the Wright Flyer sent to London instead, where it remained on display at the Science Museum until after his death early in 1948.

The family had the Wright Flyer moved to the Smithsonian at the end of 1948, but not before insisting that a contract be drawn up naming the brothers as the undisputed first in flight. The contract specifically states that, should the Smithsonian recognize anyone else as being first—or having built a flying machine before the brothers did—the family will promptly remove the Flyer from the museum.

Amanda Wright Lane, the brothers' great grandniece, said the contract provided necessary leverage to keep the Smithsonian from relegating the Wright Flyer to the back of the museum behind Langley's craft.

"When they asked the Wright family and Orville for the flying machine, they said, 'We'd be happy to hang it right behind the Aerodrome as Number Two,'"—something, she added, that many recent news accounts critical about the contract fail to mention.

"I think the Wright family has always tried to deal with integrity, and I would hope the same of the Smithsonian," she said, referencing accusations that the family holds the Smithsonian hostage with regard to keeping its display intact.

"If it ever came to light that there is more proof [of Whitehead being first], for me personally, I would hope that the real truth would come out. I think, as the nation's historians, it would be the Smithsonian's job to make sure they are representing our history with integrity. But for now I cannot find anything that disproves any of the Wright brothers' work or claims. I just haven't seen it."

Jane's All the World's Aircraft believes otherwise. Paul Jackson, the publication's freelance editor, wrote about the Wrights' pioneering success several years ago. "I now believe I was wrong," he said, "and happy to admit to such, thanks to John's research."

Jackson said he adopted an engineer's approach to considering the issue—weighing Whitehead's expertise, engine developments, and the feasibility of his design.

"Too many debates about Whitehead have been kicked into the long grass by diversionary wrangling over whether this or that witness was reliable," he said. "On the engineering facts alone, I am professionally convinced that the Whitehead aircraft was capable of flight."

At the same time, in his forward to the Jane's anniversary issue, Jackson highlights the value of Bridgeport Herald editor Richard Howell's claim to have witnessed—and his having written about—that first flight. Jackson also noted that the reproduction of that singular photograph (most likely of poor quality owing to the early morning light) was logical.

Credit Where It's Due

Skeptics say this one vivid account of Whitehead's flight is not factual, and that many other newspapers simply reprinted the story without confirmation.

Crouch, who has spent much of his career researching and writing about the Wrights, said the Whitehead controversy reemerges "every 20 years, like clockwork," yet never with—in his opinion—definitive evidence to rewrite history.

Crouch also discounts the testimony of witnesses who claimed to see Whitehead flying, as well as signed affidavits stating that the Wrights visited Whitehead's shop several months before their first flight and essentially plagiarized many of his methods and tools.

One eyewitness—an employee of Whitehead's named Anton Pruckner—swore that the brothers visited Whitehead's shop and "left here with a great deal of information."

Crouch said that such testimony—which came decades later—was inaccurate, gathered by prejudiced investigators who influenced statements. "The Wrights never went to Bridgeport to visit Gus Whitehead," Crouch said. "There is a 200-page chronology of where the Wright brothers were day by day. They weren't there."
Darker Halls of History

"My dad continually sparred with the Smithsonian historians, who would never—and can never—recognize Whitehead as first to fly, as the contract forbids it," said Susan O'Dwyer Brinchman.

In fact, she said, the contract came to light only after then Senator Lowell Weicker of Connecticut obtained a copy through the Freedom of Information Act. Up till then, she said, her father and others were told the contract didn't even exist.

Brinchman said that during the 50 years he spent investigating Whitehead's history, her father was often "harassed." At one time his phone was tapped, and once a U.S. military official warned him that he could end up in jail for being too vocal about Whitehead.

"There's a dark side to this story," she said, which is why historians across the country are hesitant to second-guess an institution like the Smithsonian. "If you anger the Smithsonian, that's like angering God," she said. "You can be blackballed for life and mistreated."

This hasn't stopped John Brown from escalating his criticisms of Crouch and the Smithsonian. He continues to charge that the abundance of evidence supporting Whitehead's case is not being objectively evaluated, and that Crouch has "pretty much evaded the point on every question that's been raised."

Further, he said, scrutiny is being more aggressively applied to Whitehead than it ever was to the Wrights, whose famous photo of their first flight is still held in question in some circles, in part because it wasn't released until five years after the fact.

But since the Wright brothers were first to establish themselves as the forefathers of flight, the burden of proof will always lie with Whitehead supporters.

Following the brouhaha arising from the Jane's announcement—as well as an increasing amount of heated public correspondence between Brown and Crouch—the Smithsonian has extended an offer to Brown to come and examine the original pivotal photo in the Hammer Collection, which Crouch said Brown never asked to see in the first place.

Brown intends to jump at the chance, and he plans to bring a film crew. If there's a holy grail for Whitehead supporters, it's that photo.

Meanwhile, in Bridgeport, someone damaged the base of a statue dedicated to Whitehead, and there are those who believe it was no accident.

As far as this controversy is concerned, the next chapter is still up in the air.


"Orville and Wilbur Wright were remarkable inventors, mechanics, risk-takers, and visionaries. They designed and built their own wings, steering devices, engines, and wind tunnel. But just how did they construct such an impressive flying machine?"

The Case for Gustave Whitehead

The Wright Brothers [Official Website]
Posted by Mercury at 1:58 PM