Norbert Wiener and the future from the essay “The Machine Age” 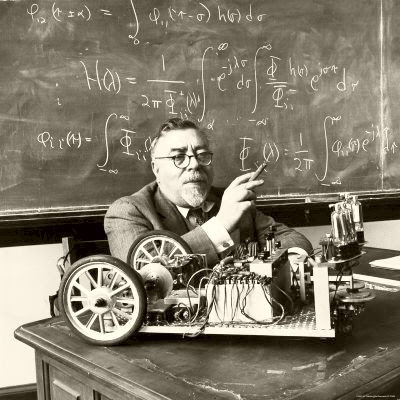 It was a vision that never saw the light of day.

The year was 1949, and computers and robots were still largely the stuff of science fiction. Only a few farsighted thinkers imagined that they would one day become central to civilization, with consequences both liberating and potentially dire.

One of those visionaries was Norbert Wiener (1894-1964), an American mathematician at the Massachusetts Institute of Technology. In 1948 he had published “Cybernetics,” a landmark theoretical work that both foreshadowed and influenced the arrival of computing, robotics and automation. Two years later, he wrote “The Human Use of Human Beings,” a popularization of those ideas and an exploration of the potential of automation and the risks of dehumanization by machines.

In 1949, The New York Times invited Wiener to summarize his views about “what the ultimate machine age is likely to be,” in the words of its longtime Sunday editor, Lester Markel.

Wiener accepted the invitation and wrote a draft of the article; the legendarily autocratic Markel was dissatisfied and asked him to rewrite it. He did. But through a distinctly pre-Internet series of fumbles and missed opportunities, neither version ever appeared.

In August, according to Wiener’s papers, which are on file at the M.I.T. Libraries, The Times asked him to resend the first draft of the article so it could be combined with the second draft. (It is not clear why the editors failed to keep a copy of the first draft.)

“Could you send the first draft to me, and we’ll see whether we can combine the two into one story?” wrote an editor in the paper’s Sunday department, then separate from the daily paper. “I may be mistaken, but I think you lost some of your best material.”

But by then Wiener was traveling in Mexico, and he responded:

I had assumed that the first version of my article was finished business. To get hold of the paper in my office at the Massachusetts Institute of Technology would involve considerable cross-correspondence and annoyance to several people.

“I therefore do not consider it a practical thing to do. Under the circumstances I think that it is best for me to abandon this undertaking.

The following week the Times editor returned the second draft to Wiener, and it eventually made its way to the libraries’ Archives and Special Collections. It languished there until December 2012, when it was discovered by Anders Fernstedt, an independent scholar who is researching the work of Karl Popper, the 20th-century philosopher.

Almost 64 years after Wiener wrote it, his essay is still remarkably topical, raising questions about the impact of smart machines on society and of automation on human labor. In the spirit of rectifying an old omission, here are excerpts from “The Machine Age,” courtesy of the M.I.T. Libraries (all rights reserved).

By this time the public is well aware that a new age of machines is upon us based on the computing machine, and not on the power machine. The tendency of these new machines is to replace human judgment on all levels but a fairly high one, rather than to replace human energy and power by machine energy and power. It is already clear that this new replacement will have a profound influence upon our lives, but it is not clear to the man of the street what this influence will be. ...

To understand what a computing machine is, let us compare a paper scheme of mathematical computation, a Chinese ... abacus and a Marchand or Fridén decimal computing machine for office use, and an electronic computing machine. Of these, the abacus is actually the oldest, but is not too familiar to the average man in the modern West.

Let us then begin with an ordinary paper schedule of computations. In this, we depend on certain memorized combinations of numbers and rules of procedure to enable us to carry out our actual operations on our numbers. The multiplication table and the rules of elementary arithmetic represent something which needs human intervention to be carried out on paper, but this human intervention follows certain inhumanly rigid and memorized laws.

In the abacus we carry out a human intervention of exactly the same sort as in combining numbers on paper, but in this case the numbers are represented by the positions of balls along a wire rather than by pen or pencil marks. The notation is just as arbitrary as in an ordinary pen or pencil computation, but the operations have a more mechanical appearance, in that they consist of the bodily motion of certain pieces of matter. Nevertheless, there is not the slightest logical difference between the abacus and the ordinary paper computation.

In the third stage, that of the desk computing machine, the same operations which occur in the abacus are made according to rules which are not memorized in all their details, but which are entrusted to the instrument, and carried out by its intervention. There is no replacement of true thought by the machine, since the level of thought of the elementary processes as we carry them out on paper is that of routine. The desk computing machine is neither more nor less than a mechanized abacus, in which our memory is replaced by certain internal interlockings of the machine.

Finally, the high-speed electronic computing machine differs from the desk machine only in the speed of its operations and the much higher complications of its interlockings. Thus an operation which previously took hours may be reduced to a matter of seconds.

We have so far spoken of the computing machine as an analogue to the human nervous system rather than to the whole of the human organism. Machines much more closely analogous to the human organism are well understood, and are now on the verge of being built. They will control entire industrial processes and will even make possible the factory substantially without employees.

In these the ultra-rapid digital computing machines will be supplemented by pieces of apparatus which take the readings of gauges, of thermometers, or photo-electric cells, and translate them into the digital input of computing machines. The new assemblages will also contain effectors, by which the numerical output of the central machine will be converted into the rotation of shafts, or the admission of chemicals into a tank, or the heating of a boiler, or some other process of the kind.

Furthermore, the actual performance of these effector organs as well as their desired performance will be read by suitable gauges and taken back into the machine as part of the information on which it works.

The general outline of the processes to be carried out will be determined by what computation engineers call taping, which will state and determine the sequence of the processes to be performed. The possibility of learning may be built in by allowing the taping to be re-established in a new way by the performance of the machine and the external impulses coming into it, rather than having it determined by a closed and rigid setup, to be imposed on the apparatus from the beginning.

The limitations of such a machine are simply those of an understanding of the objects to be attained, and of the potentialities of each stage of the processes by which they are to be attained, and of our power to make logically determinate combinations of those processes to achieve our ends. Roughly speaking, if we can do anything in a clear and intelligible way, we can do it by machine.

What the economic limitations will be — namely, how we may determine whether it is desirable to use the machine rather than human effectors — is something which we cannot state unambiguously until we have more experience. It is, however, quite clear that apart from the taping, which is the job for an intelligent man rather than for a deft man, the apparatus which we shall depend upon in the future machine age is largely repetitive, and will be capable of being manufactured by the methods of mass production.

The Genie and the Bottle

These new machines have a great capacity for upsetting the present basis of industry, and of reducing the economic value of the routine factory employee to a point at which he is not worth hiring at any price. If we combine our machine-potentials of a factory with the valuation of human beings on which our present factory system is based, we are in for an industrial revolution of unmitigated cruelty.

We must be willing to deal in facts rather than in fashionable ideologies if we wish to get through this period unharmed. Not even the brightest picture of an age in which man is the master, and in which we all have an excess of mechanical services will make up for the pains of transition, if we are not both humane and intelligent.

Finally the machines will do what we ask them to do and not what we ought to ask them to do. In the discussion of the relation between man and powerful agencies controlled by man, the gnomic wisdom of the folk tales has a value far beyond the books of our sociologists.

There is general agreement among the sages of the peoples of the past ages, that if we are granted power commensurate with our will, we are more likely to use it wrongly than to use it rightly, more likely to use it stupidly than to use it intelligently. [W. W. Jacobs’s] terrible story of the “Monkey’s Paw” is a modern example of this — the father wishes for money and gets it as a compensation for the death of his son in a factory accident, then wishes for the return of his son. The son comes back as a ghost, and the father wishes him gone. This is the outcome of his three wishes.

Moreover, if we move in the direction of making machines which learn and whose behavior is modified by experience, we must face the fact that every degree of independence we give the machine is a degree of possible defiance of our wishes. The genie in the bottle will not willingly go back in the bottle, nor have we any reason to expect them to be well disposed to us.

In short, it is only a humanity which is capable of awe, which will also be capable of controlling the new potentials which we are opening for ourselves. We can be humble and live a good life with the aid of the machines, or we can be arrogant and die.

Email ThisBlogThis!Share to TwitterShare to FacebookShare to Pinterest
Labels: Norbert Wiener, the future, The Machine Age