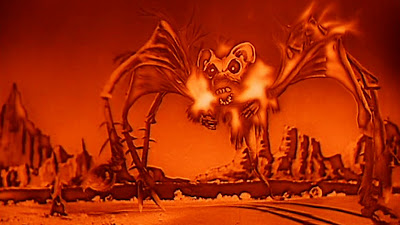 I still think the movement towards a trip to Mars is premature. Maybe a viewing of the 1960 film, The Angry Red Planet, would convince one to wait a bit longer.

Not much positive to write about the movie's content though it has gathered a number of cult followers. Despite several silly moments of dialogue such as...

The ship has returned to Earth.

Treegar will regret that statement in the future.

...the film is marked with some filming curiosities.

The rocketship MR-1 (for "Mars Rocket 1"), returns to Earth after the first manned flight to Mars. At first thought to have been lost in space, the rocket reappears but mission control cannot raise the crew by radio. The ground crew land the rocket successfully by remote control. Two survivors are found aboard: Dr. Iris Ryan (Naura Hayden) and Col. Tom O'Bannion (Gerald Mohr), the latter's arm covered by a strange alien growth. The mission report is recounted by Dr. Ryan as she attempts to find a cure for Col. O'Bannion's arm.

While exploring Mars, Ryan was attacked by a carnivorous plant, which was killed by O'Bannion. They also discover, after mistaking its legs for trees, an immense bat-rat-spider creature, which is later repelled by a freeze ray fired by weapons officer Jacobs. When they return to their ship, the crew finds that their radio signals are being blocked and the MR-1 is grounded by a force field. O'Bannion leads the crew to a Martian lake with a city visible on the other side. They cross in an inflatable raft, only to be stopped by a giant amoeba-like creature with a single spinning eye. The creature kills Jacobs and infects O'Bannon's arm. The survivors escape to the MR-1 and commence liftoff. The survivors then return to Earth, where O'Bannon's infected arm is cured using electric shocks.

When all of the data brought back by the expedition is examined, the mission scientists find a recorded message. An alien voice announces that the MR-1 crew were allowed to leave so they can deliver a message to Earth. The Martians are watching human development and believe its technology has outpaced cultural advancement. They warn humanity to never return to Mars or Earth will be destroyed in retaliation.

Director Ib Jørgen Melchior was given just 10 days with a budget of $200,000 for filming and post production work.

Creative filming had to be employed i.e., the Cinemagic process.

The much-touted Cinemagic process which was used for the scenes set on Mars was actually the result of a film-developing mistake. The budget was slashed mid-production so the producers considered turning the film into black and white to keep costs down. However, one reel became accidentally double-exposed which produced a shimmering, vaguely psychedelic glare that director Ib Melchior latched onto, thinking it would suit his purposes for the Mars scenes. (It also helped to camouflage the cheap Martian monsters and scenery.)

CineMagic is the name of a film process invented by Norman Maurer and 3-D movie producer Sid Pink for the 1959 science-fiction film The Angry Red Planet to cast a red glow over scenes depicting the surface of Mars. The low-cost process made the actors look similar to cartoon drawings so they would fit in with low-budget, less realistic sets and props.

I remember viewing this film during the Summer in a non-airconditioned theater. The Martian scenes were too much: Heat, stuffy air, and hot-looking Martian surface. Despite all the drawbacks, it is an entertaining film. The "rat-spider" is still pretty cool.


The "experts" need a reality check
Posted by Mercury at 3:01 PM