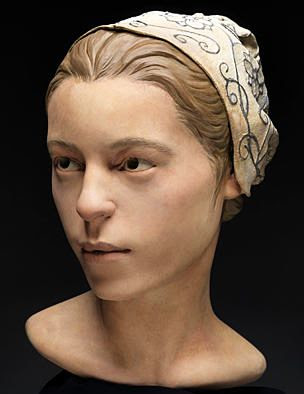 A forensic facial reconstruction produced by StudioEIS of Brooklyn, New York, in consultation with Smithsonian researchers, based on human remains excavated at James Fort, Jamestown, Virginia by the Jamestown Rediscovery Project, is pictured in this handout provided by the Smithsonian Institution.

Born about 1595, Jane hailed from England's southern coast. She was likely the daughter of a gentleman, and her ship to the Americas likely arrived at James Fort in August 1609. It turned out to be one of the worst possible times to land at the New World's first permanent English settlement.

Jane died that year, or possibly early the following year, and her flesh was eaten by her fellow settlers to fend off starvation.

These are the conclusions of those who examined Jane's bones, which represent the first physical evidence of cannibalism in Colonial America.

What would later become the Jamestown settlement was founded two years earlier, in 1607. In many respects, the site chosen by Captain Edward Maria Wingfield, who led the 104 settlers, was ideal. It was surrounded on three sides by navigable water and was a perfect defensive location. Most importantly, the spot was not inhabited by native Americans.

But there was a reason the Indians avoided the site:

The land was swampy and unsuited for agriculture, the water brackish and undrinkable, and the air buzzing with mosquitoes. In any case, the settlers arrived too late to plant crops. Within nine months, almost two thirds of the colonists had died.

Hundreds more settlers arrived at James Fort, as it was called then, and that meant more mouths to feed. Relations between the colonists and the Powhatan Indians, initially friendly, turned sour, and the natives laid siege to the settlement, trapping the colonists inside.

George Percy, who led the settlers during the starving time, would later describe the desperation:


Now all of us att James Towne beginneinge to feele the sharpe pricke of hunger w[hi]ch noe man trewly descrybe butt he w[hi]ch hathe Tasted the bitternesse thereof. A worlde of miseries ensewed as the Sequell will expresse unto yow, in so mutche thatt some to satisfye their hunger have Robbed the store for the w[hi]ch I Caused them to be executed. Then haveinge fedd upour horses and other beastes as longe as they Lasted, we weare gladd to make shifte w[i]th vermin as doggs Catts Ratts and myce all was fishe thatt Came to Nett to satisfye Crewell hunger, as to eate Bootes shoes or any other leather some Colde come by and those beinge Spente and devoured some weare inforced to searche the woodes and to feede upon Serpentts and snakes and to digge the earthe for wylde and unknowne Rootes, where many of our men weare Cutt of and slayne by the Salvages. And now famin beginneinge to Looke gastely and pale in every face, thatt notheinge was Spared to mainteyne Lyfe and to doe those things w[hi]ch seame incredible, as to digge upp deade corpes outt of graves and to eate them.

Many historians doubted Percy's accounts of cannibalism, but those doubts are now dispelled. The bones of Jane – a name the researchers have given to the girl whose identity is unknown – were spotted in a refuse pit along with the skeletal remains of butchered horses and dogs by a team of archaeologists led by William Kelso of Preservation Virginia.

"Our team has discovered partial human remains before, but the location of the discovery, visible damage to the skull and marks on the bones immediately made us realize this finding was unusual," said Dr. Kelso in a press release.

Jane's remains were analyzed by Douglas Owsley, a physical anthropologist at the Smithsonian's National Museum of Natural History in Washington, who concluded, based on the cut marks on her skull and shinbone, that someone had stripped the meat from her bones.

"These people were in dire circumstances. So any flesh that was available would have been used," Dr. Owsley said in an interview with Smithsonian Magazine, which broke the story on Wednesday. "The person that was doing this was not experienced and did not know how to butcher an animal. Instead, we see hesitancy, trial, tentativeness and a total lack of experience."

Owsley would know, having analyzed many cannibalized remains from ancient history, as well as those of the first victim of Jeffrey Dahmer.

He doubts that Jane was murdered for food, however. “I don’t think that they killed her, by any stretch,” he told Smithsonian. “It's just that they were so desperate, and so hard-pressed, that out of necessity this is what they resorted to.”

Jane's bones revealed other clues about her life. Her molars and the joint below her knee indicated her age, about 14 years old. Isotopes revealed a diet of English rye and barley, and plenty of meat, suggesting an upper-class background. Oxygen molecules indicate an English upbringing near the sea.

Using a reproduction of her skull as a model, experts have reconstructed a bust of Jane, which will be on display as part of a new exhibition at Historic Jamestowne, which opens Friday.

"The 'starving time' was brought about by a trifecta of disasters: disease, a serious shortage of provisions, and a full scale siege by the Powhatans that cut off Jamestown from outside relief," said Jamestown expert Jim Horn, in a press release. "Survival cannibalism was a last resort; a desperate means of prolonging life at a time when the settlement teetered on the brink of extinction."