"A Boy and His Atom"...smallest movie ever made 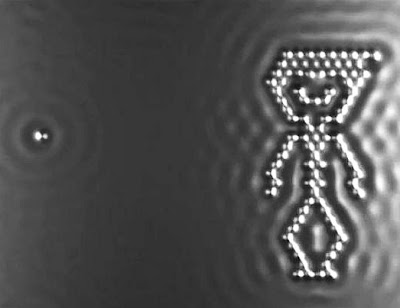 Researchers at IBM have created the world's smallest movie by manipulating single atoms on a copper surface.

The stop-motion animation uses a few dozen carbon atoms, moved around with the tiny tip of what is called a scanning tunnelling microscope (STM).

It would take about 1,000 of the frames of the film laid side by side to span a single human hair.

The extraordinary feat of atomic precision has been certified by the Guinness Book of World Records.

It is a showpiece for IBM's efforts to design next-generation data storage solutions based on single atoms.

IBM's scientists have been behind a number of technologies that can peer into atomic and molecular systems - their recent efforts using a related machine called an atomic force microscope have yielded pictures of single molecules and even images that detail the atomic bonds within molecules.

The new movie, titled A Boy and His Atom, instead uses the STM, an IBM invention which garnered the scientists behind it the 1986 Nobel prize in physics.

The device works by passing an electrically charged, phenomenally sharp metal needle across the surface of a sample. As the tip nears features on the surface, the charge can "jump the gap" in a quantum physics effect called tunnelling.

The 242 frames of the 90-second movie are essentially maps of this "tunnelling current" with a given arrangement of atoms. It depicts a boy playing with a "ball" made of a single atom, dancing, and jumping on a trampoline.

"The tip of the needle is both our eyes and our hands: it senses the atoms to make images of where the atoms are, and then it is moved closer to the atoms to tug them along the surface to new positions," explained Andreas Heinrich, principal investigator at IBM Research in California, US.

"The atoms hold still at their new positions because they form chemical bonds to the copper atoms in the surface underneath, and that lets us take an image of the whole arrangement of atoms in each frame of the film.

"Between frames we carefully move around the atoms to their new positions, and take another image," he told BBC News.

The effort, detailed in a number of YouTube videos, took four scientists two weeks of 18-hour days to pull off.

It underlines the growing ability of scientists to manipulate matter on the atomic level, which IBM scientists hope to use to create future data storage solutions.

In early 2012, they demonstrated a means to store a digital "bit" - the smallest unit of information - using just 12 atoms, in contrast to the million or so atoms required by the device you are reading this on.

But A Boy and His Atom is, Dr Heinrich concedes, a bit of fun.

"This isn't really about a particular scientific breakthrough. The movie is really a conversation-starter to get kids and other people talking about - and excited about - math, science and technology."

Email ThisBlogThis!Share to TwitterShare to FacebookShare to Pinterest
Labels: A Boy and His Atom, physics, smallest movie ever made