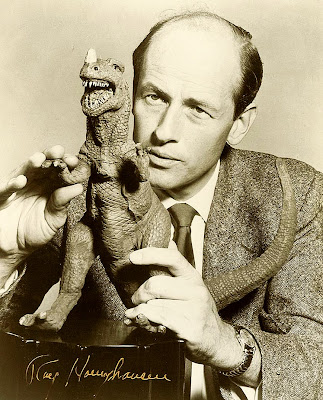 Ray Harryhausen, the animator and special-effects wizard who found ways to breathe cinematic life into the gargantuan, the mythical and the extinct, died on Tuesday in London, where he lived. He was 92.

His family announced his death.

Often working alone or with a small crew, Mr. Harryhausen created and photographed many of the most memorable fantasy-adventure sequences in movie history: the atomically awakened dinosaur that lays waste to Coney Island in “The Beast From 20,000 Fathoms”; the sword fight between Greek heroes and skeleton warriors in “Jason and the Argonauts”; the swooping pterodactyl that carries off Raquel Welch in “One Million Years B.C.”

Though his on-screen credit was often simply “technical effects” or “special visual effects,” Mr. Harryhausen usually played a principal creative role in the films featuring his work. He frequently proposed the initial concept, scouted the locations and shaped the story, script, art direction and design around his ideas for fresh ways to amaze an audience.

Mr. Harryhausen made use of many different photographic effects and often combined several in the same film. But he was best known for stop-motion animation, a painstaking process using three-dimensional miniature models that are photographed one frame at a time, with tiny, progressive adjustments made by hand to the models between frames to produce the illusion of movement.

The effects he achieved inspired the generation of filmmakers who produced the digital-effects-laden blockbuster films of the 1990s and beyond.

George Lucas and Steven Spielberg, James Cameron and Peter Jackson all cite his films as crucial antecedents for their work, and modern animators often slip homages to him into their films, like the Harryhausen piano in Tim Burton’s “Corpse Bride” and Harryhausen’s restaurant in the Pixar feature “Monsters, Inc.”

Unlike later animators like Mr. Burton and Nick Park, who used stop-motion in highly stylized ways, Mr. Harryhausen strove for realism. He constantly sought ways for his creations to share the screen and interact with live actors and settings as seamlessly and believably as possible.

The heart of his technique was a process he developed called Dynamation. It involved photographing a miniature — of a dinosaur, say — against a rear-projection screen through a partly masked pane of glass. The masked portion would then be re-exposed to insert foreground elements from the live footage. The effect was to make the creature appear to move in the midst of live action. It could now be seen walking behind a live tree, or viewed in the middle distance over the shoulder of a live actor — effects difficult to achieve before.

His innovations were honored in 1992 with a career Academy Award for technical achievement. At the Oscar ceremony, Tom Hanks told the audience that he thought the greatest movie of all time was not “Citizen Kane” or “Casablanca” but “Jason and the Argonauts.”

Raymond Frederick Harryhausen was born in Los Angeles on June 29, 1920, the only child of doting parents, Fred and Martha, who encouraged his fascination with dinosaurs, fantasy fiction, movies and art. He found his life’s work when, as a teenager in 1933, he saw “King Kong,” one of the first two feature films to use stop-motion, the other being “The Lost World” (1925), both the handiwork of the pioneering animator Willis O’Brien.

“My work, and therefore to a large extent my life, have been tied to a specific film and the man responsible for it,” he wrote in his 2003 autobiography (written with Tony Dalton), “Ray Harryhausen: An Animated Life.”

With help from his parents — especially his father, a machinist and inventor — Mr. Harryhausen was soon teaching himself the basics of stop-motion animation and producing short films of dinosaurs and apes in the family garage. While still in high school, he got an appointment to meet Mr. O’Brien and showed him some early work; on Mr. O’Brien’s advice, he studied anatomy and sculpture and took night classes in film production.

The two men stayed in touch through Mr. Harryhausen’s early working years as a technician making stop-motion “Puppetoon” shorts for Paramount, humorous animated training films for the Army during World War II and, after the war, his own animated short films of Mother Goose stories and some advertising work.

Then, when Merian C. Cooper, the director and producer of “King Kong,” set out to make another feature with Mr. O’Brien about a giant ape, Mr. O’Brien remembered Mr. Harryhausen and hired him to animate most of the film, “Mighty Joe Young,” released in 1949. It won an Academy Award for special effects.

Its success spurred Mr. Harryhausen to try developing feature projects of his own. After several false starts came “The Beast From 20,000 Fathoms,” partly based on a short story, “The Fog Horn,” by Ray Bradbury, whom Mr. Harryhausen had gotten to know as a teenager through a local science fiction club. The film was a sleeper hit in 1952, establishing Mr. Harryhausen as someone who could deliver astonishing footage on a tight budget and draw big audiences.

He upgraded his techniques and ambitions (though not always his budgets) with three more black-and-white science fiction pictures, but, he told an interviewer, Christopher Bahn, in 2006, “I got tired of destroying cities.” In 1958, he moved into color and the realm of mythical adventure with “The Seventh Voyage of Sinbad,” creating a milieu, effects and characters that he would return to in “Jason and the Argonauts” and two more Sinbad films.

To make “The Three Worlds of Gulliver” (1959), which required combining footage of giant and tiny live actors in the same shot, Mr. Harryhausen went to Britain to take advantage of the “traveling matte” system developed by the Rank Organization, and then decided to live and work there permanently. He met Diana Livingstone Bruce, a descendant of the Scottish explorer David Livingstone, and married her in Britain shortly after completing “Jason and the Argonauts” in 1963. She survives him, along with their daughter, Vanessa.

Along with the mythical adventures, more gigantic prehistoric animals were to come in “Mysterious Island,” “One Million Years B.C.” and “The Valley of Gwangi,” a dinosaurs-in-the-Old-West fantasy that Willis O’Brien had started to develop in the 1940s and that Mr. Harryhausen brought to fruition in 1969, seven years after Mr. O’Brien’s death. He also turned to outer space with “First Men in the Moon” in 1964.

Mr. Harryhausen continued to make Dynamation films through the 1970s, though at a slowing pace, as audience tastes shifted and Hollywood turned its attention to the advanced optical and digital special effects of films like “Star Wars” and “Jurassic Park,” which Mr. Harryhausen had no interest in using. His Greek-mythology epic “Clash of the Titans” (1981), the first of his projects to be made with A-list stars like Laurence Olivier and Maggie Smith and a budget to match, would also prove to be his last feature, when a proposed follow-up, “Force of the Trojans,” failed to win studio backing. (A remake of “Clash of the Titans,” heavy with digital effects, was released in 2010.)

But it was not his last film: “The Story of the Tortoise and the Hare,” a Mother Goose short that he had left half-finished when his feature career took off in the early 1950s, was completed by two young animators under his direction in 2002, using many original models he had kept in storage for five decades.

Mr. Harryhausen often told interviewers that for all the advances in complexity, precision and detail that computer-generated imagery had brought to filmmaking in recent years, he thought some of the necessary magic had been lost.

“There’s a strange quality in stop-motion photography, like in ‘King Kong,’ that adds to the fantasy,” he said in 2006. “If you make things too real, sometimes you bring it down to the mundane.”


And this clip from Jason and the Argonauts--the skeleton fight... 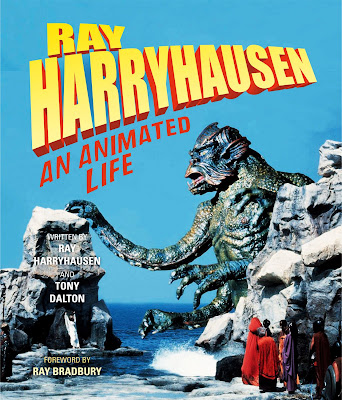