The "experts" need a reality check 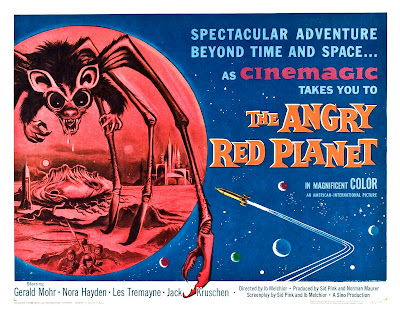 NASA and private sector experts now agree that a man or woman could be sent on a mission to Mars over the next 20 years, despite huge challenges.

The biggest names in space exploration, among them top officials from the US space agency and Buzz Aldrin, the second man to walk on the moon, will discuss the latest projects at a three-day conference starting Monday in the US capital.

Renewed interest in the red planet has triggered the launch of several initiatives in recent months, including one proposing a simple one-way trip to cut costs.

The American public also favors sending astronauts to Mars, according to a survey by non-profit group Explore Mars and aerospace giant Boeing.

The poll in March of more than a thousand people published in March found that 71 percent of Americans expect that humans will land on Mars by 2033.

Seventy-five percent say NASA's budget should be doubled to one percent of the federal budget to fund a mission to Mars and other initiatives.

NASA receives only 0.5 percent of the US federal budget, compared to four percent during the Apollo project to conquer the moon in the 1960s.

The US space agency's chief Charles Bolden has stressed that "a human mission to Mars is a priority."

But the US financial crisis is a major obstacle to such a project.

"If we started today, it's possible to land on Mars in 20 years," said G. Scott Hubbard of Stanford University.

"It doesn't require miracles, it requires money and a plan to address the technological engineering challenges," added Hubbard, who served as NASA's first Mars program director and successfully restructured the entire Mars program in the wake of mission failures.

Placing a mass of 30-40 tonnes -- the amount estimated to be necessary to make a habitat on the red planet -- would be one of the greatest challenges, along with the well-known problem of carrying or producing enough fuel to get back, Hubbard stressed.

The Curiosity rover took a nail-biting seven minutes in August to make its descent on Mars. But it only weighed one tonne.

The $2.5 billion Curiosity mission, which is set to last at least two years, aims to study the Martian environment and to hunt for evidence of water in preparation for a possible future manned mission.

Robotic missions will therefore be necessary to prove the system works before scientists can even contemplate sending humans aboard.

NASA is developing a Space Launch System and the Orion capsule for distant space exploration.

Hubbard said a nuclear engine should be developed for any vehicle headed to Mars because it would provide a continuous thrust and thus reduce travel time by about three months, as well as reduce the risk of radiation.

The distance between Earth and Mars varies between 35 million and 250 million miles (56 million and 400 million kilometers), depending on the planets' position.

In addition to the technological challenges, the negative impact of long space journeys on the human body are not yet well known, especially with respect to cosmic radiation.

Davison said it was important to understand "both the cancer risk to our crew members in more detail and also the effects on the central nervous system."

He added that more than half of crew members at the International Space Center have experience some degree of change in their vision, and also have experienced intra-cranial pressure.

Other physiological changes, such as reduced bone density and muscle loss, can be mitigated by exercise.

The third major challenge is a psychological one, for isolated astronauts who spend long periods of time confined in cramped spaces.

Davison said scientists need a "minimum" of 10 years to complete research about the trip's impact on the human body before going to Mars.
Posted by Mercury at 4:52 PM

Email ThisBlogThis!Share to TwitterShare to FacebookShare to Pinterest
Labels: trip to Mars