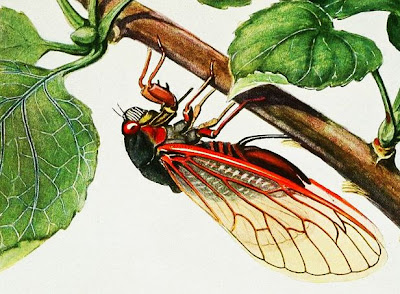 "Cicadageddon! US east coast prepares for invasion of 17-year cicadas"

Later this month billions of cicadas are expected to overrun the US east coast – but in New Jersey, they've already arrived

Later this month, billions of cicadas are expected to overrun the US east coast, flying about, being loud and generally causing a nuisance.

The brood of cicadas (Brood II is their official title) have been maturing under the ground for 17 years. When cicadas do finally break free, they behave much like teenagers everywhere. The 2in-long, red-eyed insects climb trees, shed their exoskeletons and beat their wings together to attract a mate. After several weeks of rigorous intercourse, they drop to the ground, dead.

The insects have been beneath the ground, feasting on tree roots and slowly growing in size. When the ground temperature reaches a steady 64F, usually at the end of May, the cicadas will emerge en masse.

But in Short Hills, New Jersey, cicadas have been spotted at the Cora Hartshorn Arboretum for days. Adam Gabbatt went to investigate …

17 years? This is almost as bad as studying the "Pitch Drop Experiment" .
Posted by Mercury at 7:28 AM

Email ThisBlogThis!Share to TwitterShare to FacebookShare to Pinterest
Labels: Cicada