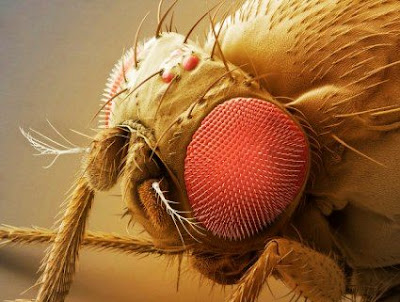 A digital camera that functions like an insect's compound eye is reported in the journal Nature this week.

It comprises an array of 180 small lenses, which, along with their associated electronics, are stretched across a curved mounting.

The prototype currently has few pixels, so its images are low-resolution.

But the device displays an immense depth of field, and a very wide-angle view that avoids the distortion seen in standard camera lenses.

The development team, led from the University of Illinois at Urbana-Champaign, US, believes its new imaging system could eventually find uses in surveillance and for endoscopic investigations of the human body.

The researchers also suggest such cameras could be fitted to tiny aerial vehicles one day that behaved like robotic insects.

At the moment, the "bug-eye" system's vision is comparable to that enjoyed by some ants and beetles.

The expectation, however, is that the array can be greatly enlarged.

"The compound design of the fly's eye incorporates perhaps 28,000 small eyes, or ommatidia," explained team-member Dr Jianliang Xiao from the University of Colorado at Boulder, US. "That's the direction we want to move in," he told BBC News.

In an insect, each ommatidium in the compound eye has a corneal lens, a crystalline cone and a light-sensitive organ at its base. The ommatidia work in unison to build a picture of the world.

In the artificial version, microlenses sit above photodetectors and other electronics, and software stitches together the individual signals.

This whole arrangement is fabricated flat and then moulded to a hemispherical shape to give a 160-degree view. The latest generation of stretchable electronics was key to achieving the desired geometry.

Scientists are keen to exploit the advantages of compound eyes.

For one, they show remarkable depth of field - they can focus on objects at different distances at the same time. They also do not suffer from the aberrations seen in single lens systems when viewing off-axis objects. A good example is the huge distortion observed in wide-angle camera lenses such as the fish-eye.

For an insect, their compound system capabilities make them very sensitive to movement.

"Our system could eventually be used in surveillance cameras. One device of this kind could see 180 degrees. If you had two, you could then conceivably see the whole field of view," said Dr Xiao.

Alexander Borst and Johannes Plett are from the Max-Planck-Institute of Neurobiology in Martinsried, Germany. They are not connected with the research but speculated for Nature on other possible future applications.

"Picture the following: a palm-sized micro aerial vehicle uses an artificial faceted eye to navigate autonomously through a collapsed building while other sensors onboard scan the environment for smoke, radioactivity or even people trapped beneath rubble and debris."

Inspired by the complex fly eye, an interdisciplinary team led by researchers at the University of Illinois at Urbana-Champaign and Northwestern University has developed a hemispherical digital camera with nearly 200 tiny lenses, delivering exceptionally wide-angle field of view and sharp images.

Humans capture pictures using the two lenses of our relatively flat eyes, while a top-of-the-line SLR camera has just one flat lens. The new camera—a rounded half bubble, similar to a bulging fly eye—has 180 microlenses mounted on it, allowing it to take pictures across nearly 180 degrees. Only a camera shaped like a bug's eye can do this.

With this wide-angle field of view, the new technology could be used in future surveillance devices or for imaging in endoscopic procedures. The researchers say it would be simple enough to combine two of the hemispheres they've demonstrated to get a 360-degree view.

Details of the bio-inspired camera, which required experts in optics, electronics, fabrication, and modeling and design theory, will be published in the May 2 issue of the journal Nature.

"What we have, in a sense, is many small eyes on one big eye," said Northwestern's Yonggang Huang, a senior author of the paper. "Each small eye, composed of a microlens and a microscale photodetector, is a separate imaging system, but when they are all taken together, the camera can take a clear picture, with just one snap, of nearly 180 degrees.

"The interface of different fields generates interesting new devices that never existed before," he said. Huang is the Joseph Cummings Professor of Civil and Environmental Engineering and Mechanical Engineering at the McCormick School of Engineering and Applied Science.

Huang's lab was responsible for the modeling and design theory for the project, which took the whole team three years to complete.

The digital camera is just the latest innovation in a long and fruitful collaboration between two engineers—Huang and John A. Rogers at the University of Illinois at Urbana-Champaign—that has developed stretchable electronics and various devices using the technology, including an earlier digital camera, advanced surgical tools and health/wellness monitors.

Their electronics, which can bend, twist and stretch without breaking, were well suited to the challenge of developing a hemispherical camera.

"Full 180-degree fields of view with zero aberrations can only be accomplished with image sensors that adopt hemispherical layouts—much different than the planar CCD chips found in commercial cameras," said Rogers, a Swanlund Chair Professor, of the new camera.

"When implemented with large arrays of microlenses, each of which couples to an individual photodiode, this type of hemispherical design provides unmatched field of view and other powerful capabilities in imaging," he said. "Nature has developed and refined these concepts over the course of billions of years of evolution."

Eyes in arthropods use compound designs, in which arrays of smaller eyes act together to provide image perception. Each small eye, known as an ommatidium, consists of a corneal lens, a crystalline cone and a light-sensitive organ at the base. The entire system is configured to provide exceptional properties in imaging, many of which lie beyond the reach of existing man-made cameras.

The 180 microlenses of Roger and Huang's camera is comparable to the eye of fire ants and bark beetles, but less than the fly eye, which has thousands of small eyes.

"Existing camera imaging technology is flat, and we made a system that is curvilinear," Huang said. "Making a stretchable array of photodetectors was easy—that's what we do. The difficult part was making a hemispherical lens. We needed to make sure the lens experienced as little strain as possible when stretched."
The researchers developed new ideas in materials and fabrication strategies allowing construction of artificial ommatidia in large, interconnected arrays in hemispherical layouts. Building such systems represents a daunting task, as all established camera technologies rely on bulk glass lenses and detectors constructed on the planar surfaces of silicon wafers which cannot be bent or flexed, much less formed into a hemispherical shape.

"A critical feature of our fly eye cameras is they incorporate integrated microlenses, photodetectors and electronics on hemispherically curved surfaces," said Jianliang Xiao, an assistant professor of mechanical engineering at University of Colorado Boulder and coauthor of the study. "To realize this outcome, we used soft, rubbery optics bonded to detectors/electronics in mesh layouts that can be stretched and deformed, reversibly and without damage."

Xiao is a former doctoral student of Huang's at Northwestern who then went on to work as a postdoctoral researcher in Rogers' lab at Illinois.

The fabrication starts with electronics, detectors and lens arrays formed on flat surfaces using advanced techniques adapted from the semiconductor industry, Xiao said. The lens sheet—made from a polymer material similar to a contact lens—and the electronics/detectors are then aligned and bonded together. Pneumatic pressure deforms the resulting system into the desired hemispherical shape, in a process much like blowing up a balloon, but with precision engineering control.

The individual electronic detectors and microlenses are coupled together to avoid any relative motion during this deformation process. Here, the spaces between these artificial ommatidia can stretch to allow transformation in geometry from planar to hemispherical. The electrical interconnections are thin and narrow, in filamentary serpentine shapes; they deform as tiny springs during the stretching process.

According to the researchers, each microlens produces a small image of an object with a form dictated by the parameters of the lens and the viewing angle. An individual detector responds only if a portion of the image formed by the associated microlens overlaps the active area. The detectors stimulated in this way produce a sampled image of the object that can then be reconstructed using models of the optics.

Maybe this will help... 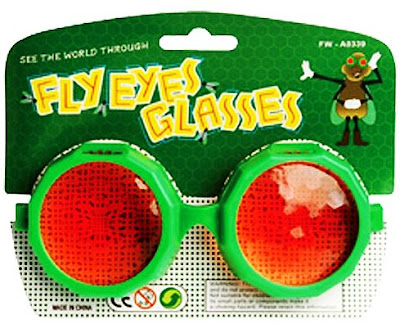