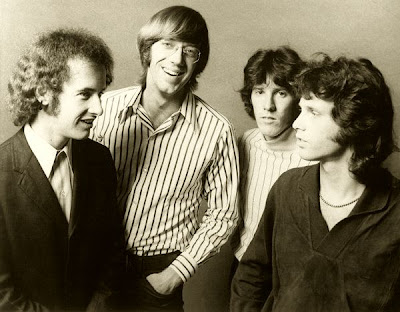 "Ray Manzarek, 74, Keyboardist and a Founder of the Doors, Is Dead"

Ray Manzarek, who as the keyboardist and a songwriter for the Doors helped shape one of the indelible bands of the psychedelic era, died on Monday at a clinic in Rosenheim, Germany. He was 74.

The cause was bile duct cancer, according to his manager, Tom Vitorino. Mr. Manzarek lived in Napa, Calif.

Mr. Manzarek founded the Doors in 1965 with the singer and lyricist Jim Morrison, whom he would describe decades later as “the personification of the Dionysian impulse each of us has inside.” They would go on to recruit the drummer John Densmore and the guitarist Robby Krieger.

Mr. Manzarek played a crucial role in creating music that was hugely popular and widely imitated, selling tens of millions of albums. It was a lean, transparent sound that could be swinging, haunted, meditative, suspenseful or circuslike. The Doors’ songs were generally credited to the entire group. Long after the death of Mr. Morrison in 1971, the music of the Doors remained synonymous with the darker, more primal impulses unleashed by psychedelia. In his 1998 autobiography, “Light My Fire,” Mr. Manzarek wrote: “We knew what the people wanted: the same thing the Doors wanted. Freedom.”

The quasi-Baroque introduction Mr. Manzarek brought to the Doors’ 1967 single “Light My Fire“ — a song primarily written by Mr. Krieger — helped make it a million-seller. Along with classical music, Mr. Manzarek also drew on jazz, R&B, cabaret and ragtime. His main instrument was the Vox Continental electric organ, which he claimed to have chosen, Mr. Vitorino said, because it was “easy to carry.”

The Doors’ four-man lineup did not include a bass player; onstage, Mr. Manzarek supplied the bass lines with his left hand, using a Fender Rhodes piano bass, though the band’s studio recordings often added a bassist.

Mr. Densmore said, via e-mail: “There was no keyboard player on the planet more appropriate to support Jim Morrison’s words. Ray, I felt totally in sync with you musically. It was like we were of one mind, holding down the foundation for Robby and Jim to float on top of. I will miss my musical brother.”
After Mr. Morrison’s death, Mr. Manzarek strove to keep the Doors together, led his own bands and continued to influence the Los Angeles underground. He produced “Los Angeles,” the 1980 debut album by the leading Southern California punk band X. But he also kept returning to the music of the Doors, rejoining Mr. Krieger in 2002 in a band whose name became the subject of a long legal battle with Mr. Densmore over use of the Doors’ name. Manzarek-Krieger, as the band was finally named, had more dates booked this year, Mr. Vitorino said.

“I was deeply saddened to hear about the passing of my friend and bandmate Ray Manzarek today,“ Mr. Krieger said in a statement. “I’m just glad to have been able to have played Doors songs with him for the last decade. Ray was a huge part of my life and I will always miss him.“

Mr. Densmore had also hinted publicly that the surviving Doors might reunite. “The Doors are back on their hinges,“ he told the talk-show host Tavis Smiley earlier this month.

Mr. Manzarek was born Raymond Daniel Manczarek Jr. on Feb. 12, 1939, in Chicago and grew up there on the South Side, taking classical piano lessons. In 1962-65, he attended film school at the University of California in Los Angeles, where he met Mr. Morrison, a fellow film student who was writing poetry.

In a chance encounter on Venice Beach during the summer after graduation, Mr. Morrison mentioned that he had some possible song lyrics; they included “Moonlight Drive,” prompting Mr. Manzarek to suggest that they start a band. “Ray was the catalyst, he was the galvanizer,” said Jeff Jampol, who manages the Doors’ estate. “He was the one that took Jim by the hand and took the band by the hand and always kept pushing. Without that guiding force, I don’t know if the Doors would have been.”

Mr. Manzarek had joined his two younger brothers, Rick and Jim Manczarek, in a surf-rock band, Rick and the Ravens, that initially worked with Mr. Morrison. (Rick and Jim Manczarek survive him along with Mr. Manzarek’s wife, Dorothy; his son, Pablo; his daughter-in-law, Sharmin; and three grandchildren.) But two musicians Mr. Manzarek met in a transcendental meditation class, Mr. Densmore and Mr. Krieger, ended up becoming the Doors, named after the Aldous Huxley book on the psychedelic experience, “The Doors of Perception” (quoting William Blake).

They honed their music through club dates in Los Angeles, including a residency at the Whisky a Go Go on the Sunset Strip. In 1966 they were signed to Elektra Records, two months before they were fired by the Whisky when Mr. Morrison unveiled the crudely Oedipal lyrics of “The End.” They recorded their 1967 debut album, “The Doors,” in a week; it included “Light My Fire,” and an edited version of the song, without a jazzy instrumental interlude, became a No. 1 hit and part of the ubiquitous soundtrack of the Summer of Love and the Vietnam War.

From 1967 to 1971, the Doors had a prolific and stormy career. In the volatile culture of the late 1960s Mr. Morrison strove to test taboos, defying television censorship — singing the word “higher” on “The Ed Sullivan Show” — and drawing prosecution for obscenity. Alcohol and drugs made him unreliable onstage and in the studio, but the Doors would end up recording six studio albums and a string of hits including “Hello, I Love You” and “Riders on the Storm,” which featured Mr. Manzarek’s electric piano. The Doors’ catalog has never left rock radio and has been endlessly repackaged, most recently as an iPad app.

After Mr. Morrison’s death, the band made albums without him before disbanding. In 1977, the surviving Doors reunited to record backup tracks to poetry that Mr. Morrison had recorded; the resulting album, “An American Prayer” sold a million copies.

Mr. Manzarek made solo albums and led the band Nite City during 1970s, and in 1983 he recorded a rock adaptation of Carl Orff’s “Carmina Burana” with the composer Philip Glass. In 2002 he and Mr. Krieger began touring as The Doors of the 21st Century. Mr. Densmore and the Morrison estate sued to prevent them from using the Doors name and eventually prevailed. According to Mr. Vitorino, the Manzarek-Krieger band has made unreleased recordings.

Mr. Manzarek had other projects. He made music to back up the poet Michael McClure, and he worked with the blues slide guitarist Roy Rogers. His last studio album was “Translucent Blues,” a collaboration with Mr. Rogers that was released in 2011. “He was always stretching boundaries,” Mr. Rogers said.

Ray Manzarek, the founding keyboardist of the Los Angeles rock band , died in a clinic in Germany on Monday after a lengthy battle with cancer, according to his publicist. He was 74.

One of the biggest-selling bands of all time — and one of the most controversial — The Doors came together in 1965, after Manzarek moved to Los Angeles and recruited Jim Morrison to sing with his college band. Manzarek grew up on Chicago's south side and resisted piano lessons when he was young, until he heard Chicago blues and jazz on the radio. His keyboard playing on such Doors classics as "Light My Fire," "Riders on the Storm," "Break on Through (to the Other Side)" and more provided a blues and jazz counterpoint to Morrison's poetic swagger.

After Morrison died in 1971, The Doors recorded two albums with Manzarek singing some of the lead vocals, but the band eventually broke up. Manzarek recorded several solo albums, collaborated with poets, and produced for other bands, including X, another trailblazing Los Angeles group. In 1998, Putnam published Manzarek's autobiography to critical acclaim, though Light My Fire: My Life with the Doors, was more about Morrison than Manzarek. He also wrote two novels. In 2002, Manzarek reunited with The Doors' guitarist Robby Krieger to play the band's songs live.

'Ray was a huge part of my life and I will always miss him,' says Doors guitarist Robby Krieger

Doors co-founder and keyboardist Ray Manzarek died today in Rosenheim, Germany, after a long battle with bile duct cancer. He was 74.

"I was deeply saddened to hear about the passing of my friend and bandmate Ray Manzarek today," Doors guitarist Robby Krieger said in a statement.  "I'm just glad to have been able to have played Doors songs with him for the last decade. Ray was a huge part of my life and I will always miss him."

Manzarek grew up in Chicago, then moved to Los Angeles in 1962 to study film at UCLA. It was there he first met Doors singer Jim Morrison, though they didn't talk about forming a band until they bumped into each other on a beach in Venice, California, in the summer of 1965 and Morrison told Manzarek that he had been working on some music. "And there it was!" Manzarek wrote in his 1998 biography, Light My Fire. "It dropped quite simply, quite innocently from his lips, but it changed our collective destinies."

They quickly teamed up with drummer John Densmore and guitarist Robby Krieger and began playing gigs around Los Angeles. About a year later, the Doors recorded their debut album for Elektra Records. "We knew once people heard us, we'd be unstoppable," Manzarek wrote in his memoir. "We knew what the people wanted: the same thing the Doors wanted. Freedom."

The Doors didn't have a bassist, so Manzarek often played the bass parts on his Fender Rhodes piano. He also played a Vox Continental organ, which can be heard on the famous intro to "Light My Fire" and numerous other Doors classics. The group shared credit on most songs and split all profits evenly.

The group carried on for two more albums after Jim Morrison died in July of 1971, but they split in 1973. Manzarek remained extremely busy, producing albums for X and playing with Iggy Pop, Echo and the Bunnymen and others. In 2002, he began touring as the Doors of the 21st Century with Krieger and Cult frontman Ian Astbury. Doors drummer John Densmore filed a lawsuit over the use of the name and it lead to a protracted legal battle.

"Morrison required all three of us diving into his lyrics and creating music that would swirl around him," Manzarek told Rolling Stone in 2006. "Without Jim, everybody started shooting off in different directions. . . The Doors was the perfect mixture of four guys, four egos that balanced each other. There were never any problems with 'You wrote this' or 'I wrote that.' But [after Jim died] the whole dynamic was screwed up, because the fourth guy wasn't there." 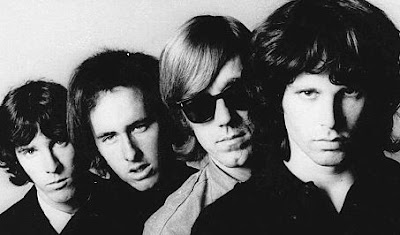 The Doors [Wikipedia]
Posted by Mercury at 7:06 AM

Email ThisBlogThis!Share to TwitterShare to FacebookShare to Pinterest
Labels: Ray Manzarek, rock and roll, The Doors