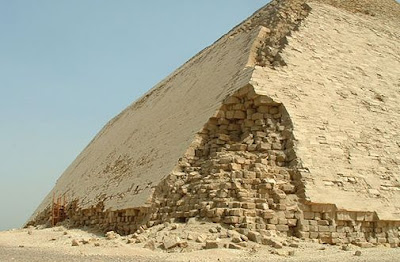 Is it possible they were too perfect?

When structural engineer Peter James arrived at the Bent Pyramid, 25 miles south* of Cairo, his task was to secure the structure's remaining "cladding" -- its smooth exterior envelope. But why was it crumbling in the first place?

The foundation seemed completely stable. The prevailing theory -- that "the missing cladding was removed by local opportunist thieves" -- didn't inspire confidence: That could explain the destruction at the lower levels, but the damage extended far up the pyramid and "in an apparently random manner, with no signs of indentations from temporary scaffolding or of any symmetrical cutting of the blocks to aid removal," James writes in STRUCTURE, a structural engineering trade publication. The damage just did not look like the result of thieves. Rather, as James puts it, it "appears to be caused by a giant whose hand has swept across the face of the pyramid with enormous energy, sucking out the facing and leaving the ragged empty sockets.?"

So what was causing the crumbling? James presents a new explanation: thermal movement -- that is to say the expansion and contraction of the limestone with temperature fluctuations -- has ground down the rocks and shifted their positions.


During the day, the temperature rises to 40°C (104°F) across the face of the outer casing, then at night cools to 3^(0)C (37^(0)F) because of the lack of cover and exposure to the prevailing winds. This gives an average daily temperature fluctuation of 37°C (67°F). The photographs of the Bent Pyramid show how thermal expansion has caused the blocks to move to the edges, where they have detached. It also shows how individual stones, unsupported, can cantilever and snap off and subsequently fall to the ground.?

He estimates that the motion can amount to 1¼ inches per 328 feet. As the stones move, dust and sand would fall from the stones and fill in the spaces between them. The spaces into which they could contract at night would shrink, and over time they would be pushed out of position. "Multiply this endless movement by the number of days that the pyramid has been erected and you have the reason why all the outer casing has moved to the extremities, where it has buckled or displaced against blocks moving in the opposite direction and then fallen off," James writes. "It may then have been picked up by opportunists and removed from the site.?"
The Bent Pyramid is one of the best preserved and, as a result, it provides a unique opportunity for studying how the crumbling is happening. James theorizes that the reason the Bent Pyramid retains its casing, while the Red Pyramid and the Great Pyramid "have virtually none" is that, ironically, the Bent Pyramid had worse construction to begin with. As the Egyptians became more skilled, and developed more accurate construction techniques, the voids between the stones disappeared, and the structures were less able to absorb the ebbs and flows of the limestone. The other, more perfect pyramids may have developed exterior cracks rather quickly, and, James hypothesizes, may be why eventually the Egyptians moved their burial grounds to the Valley of the Kings. The pyramids' perfection became their imperfection; their smooth facades broken by the precision of their construction.
Posted by Mercury at 8:57 AM