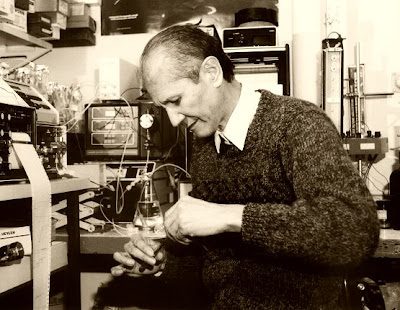 Osamu Shimomura, an emeritus professor at the Marine Biological Laboratory in Woods Hole, Mass., won a Nobel Prize in Chemistry in 2008 for taking the ability of some jellyfish to glow green and transforming it into a ubiquitous tool of molecular biology.

"For Witness to Nagasaki, a Life Focused on Science"

Sixty-eight years ago, Osamu Shimomura was a 16-year-old high school student working in a factory seven and a half miles from Nagasaki, Japan. Sitting down to work, a light flashed, briefly blinding him, and the pressure wave from an explosion came rolling through.

On his walk home from the factory, he was drenched with a black rain. His grandmother immediately had him bathe, most likely saving him from radiation-related illness.

His future wife, Akemi, was not as lucky. She was just over a mile from the blast and, though sheltered by a small hill, suffered for years from the effects of radiation poisoning.

In the aftermath of World War II and the dropping of the atomic bomb on Hiroshima and Nagasaki, Dr. Shimomura, now a Nobel Prize-winning chemist, said he largely put the events out of his mind.

But here he was last month, in the birthplace of the atomic era, to deliver a lecture at the monthly Director’s Symposium. Nearby was a museum with Manhattan Project artifacts, and surrounding him were Los Alamos scientists who were curious about how this man, now 84 and a professor emeritus at the Marine Biological Laboratory in Woods Hole, Mass., felt about the bombings in 1945.

That is not, though, what he chose to address in his talk to about 100 Los Alamos scientists and lab workers.

Instead, he recounted the discovery and development of one of the most significant tools for modern biotechnology: the green fluorescent protein, or G.F.P., used widely in cell and molecular biology as a visual tracer. The discovery, which has deepened the understanding of a wide range of fundamental biological processes, brought him the Nobel Prize in Chemistry in 2008, along with Martin Chalfie and Roger Y. Tsien.

“I decided to focus on the science,” he said.

So it has been for Dr. Shimomura since shortly after Japan’s surrender. In the chaos after the war, he spent two years “idling,” he said, before enrolling in pharmacy school, a path that was not his first choice. But not long after, during a sabbatical in the 1950s, he began his life’s work, the study of bioluminescence.

He chose as his subject a crustacean sometimes known as seed shrimp that emits a striking blue light and is plentiful in the waters around Japan. His focus was on a class of compounds, luciferin, that are bioluminescent. After years of research at Princeton, they had still never been purified.

For 10 months he struggled in his laboratory, until one night, instead of heating the mixture as he usually did, he “accidentally” left the compound in a strong acid.

“Next morning, I found the dark red mixture was turned into a colorless transparent solution,” he recalled. And when he looked with a microscope, he realized that the solvent had crystallized in pure, fine red crystals.

“I was very happy by the success of crystallization,” he said. “It was probably the happiest moment of my life.”

The discovery led to an invitation in 1959 from the marine biologist Frank Johnson to work in his Princeton laboratory. There he focused his days on studying a jellyfish, Aequorea victoria, whose edge glows green. In 1961 he and his family, with Dr. Johnson, set off for the Friday Harbor Laboratories at the University of Washington.

Ultimately the small team, including Dr. Shimomura’s family members, would collect a quarter million jellyfish, all in the hunt for the elusive green fluorescent protein.

Sitting in a rowboat one day, he said, he had an insight.

“It was a very simple idea: Luminescence probably involves a protein. If so, luminescence might be reversibly inhibited at a certain pH,” he recalled.

His breakthrough came in the form of a bright blue flash, produced when he threw his extract into a sink where seawater from an aquarium had just been poured. That led to a successful strategy for extracting the luminescent substance, and ultimately to a deeper understanding of G.F.P.

“It’s really changed biological and medical research,” said Marc Zimmer, a computational chemist at Connecticut College who maintains an introductory Web site on the technology. “It allows us to see things we couldn’t have imagined seeing in the 1990s.”

It was 50 years before Dr. Shimomura even addressed the topic of the atomic bombings, in an article for a Japanese newspaper.

“No one wanted to remember,” he said.

But in 2008, in his Nobel acceptance essay, he made his feelings about the bombings clear.

“Even if the use of the Hiroshima bomb was justifiable in order to precipitate an end to the war, the bomb dropped on Nagasaki three days later was clearly a test of new arms,” he wrote. “It cannot be justified.”

In Los Alamos on April 18, he seemed content to leave it at that. But his hosts could not.

At a dinner, Bette Korber, a theoretical biologist at the Los Alamos National Laboratory, told of how her father had been on a troop ship preparing for the invasion of Japan. For years, she said, he had credited the decision to drop the bombs with sparing his life. Years later, however, when declassified documents reopened questions about whether the Nagasaki bomb had been necessary to end the war, he was in despair, she said.

Gary Doolen, a physicist who had been a weapon designer at the lab, said there was evidence that the second bomb had been dropped as a demonstration of American power to Russians, who were then massing troops in East Asia.

After the lecture, he toured a Los Alamos museum, where full-size models of the Hiroshima and Nagasaki bombs are on display. His wife, Akemi Shimomura, also a chemist by training and his longtime research collaborator, said that the Japanese government had been stupid to not surrender immediately after the Hiroshima bomb.

The next day, they returned. Something was on his mind. The day before the Nagasaki bombing, Dr. Shimomura had seen a B-29 bomber drop three parachutes. The drop had puzzled him. He would later learn that they carried instruments for data transmission and measurement.

He asked John E. Pearson, the Los Alamos physicist who had invited him to lecture, about the instruments. After some hunting they found models of the original parachute payloads.

“Some guy came up and started explaining what we were looking at,” said Dr. Pearson. “Osamu said, ‘Yes. I watched them falling.’ I don’t think I’ve ever seen anyone quite as stunned as that guy.”

Osamu Shimomura delivered his Nobel Lecture on 8 December 2008, at Aula Magna, Stockholm University, where he was introduced by Professor Gunnar von Heijne, Chairman of the Nobel Committee for Chemistry.

The Laureates discuss how they entered science, the green fluorescent protein's journey of discovery from jellyfish to worms, the motivations behind creating a paintbox of fluorescent proteins, and how to attract students to study other glowing molecules that exist in Nature.

Nobelprize
Posted by Mercury at 2:11 PM