So a treaty to aid the blind is in trouble 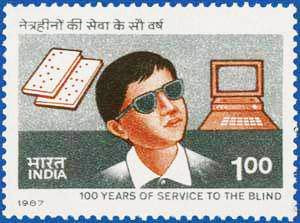 The Obama administration went on record four years ago supporting a proposed international treaty to make books more accessible to the blind.

But as world leaders prepare to gather in Morocco next month to finalize a deal that Brazil, Ecuador and Paraguay proposed in 2009, the administration is mum on whether it supports a treaty that would, for the first time, loosen copyright restrictions. Many fear lobbying by Hollywood and dozens of the world’s largest corporations, including ExxonMobil, may scuttle the treaty altogether.

The United States Patent and Trademark Office, the agency responsible for the Obama administration’s negotiations, declined to comment when Wired recently asked about its position on the proposed accord. But in 2009, Justin Hughes, a senior USPTO advisor, said:

A lot has changed in those four years following the introduction of the treaty, including multiple language alterations and opposition from some of the world’s largest companies, including Exxon and General Electric. Among other things, they say the deal is a threat to their own intellectual property, the first domino to fall toward the wholesale weakening of their patent rights.

Richard F. Phillips, the president of the Intellectual Property Owners Association and a top-ranking Exxon attorney, wrote to the Obama administration on behalf of the association that the treaty negotiations “threaten to upset the fundamental balance on which our US and global IP system is based.”

On the masthead of the letter is a who’s who of industry giants, including Apple, Johnson & Johnson, GE, Xerox, Bristol-Meyers Squibb, IBM, Caterpillar, Siemens and a host of others. Google and Microsoft, also listed on the masthead, said they don’t support the association’s position. Intel, also listed, said it takes no position on the treaty.

“There’s never been a treaty for user-rights in copyright, ever. Everybody is going crazy,” he said. “The administration seems to be caving in.”

The Motion Picture Association of America, which successfully lobbied to remove audiovisual works from the treaty, says it supports the “goal” of the treaty, but said it goes too far, according to spokeswoman Kate Bedingfield.


As we have said from the outset, we do not oppose or object to the VIP treaty. We support the goal of the treaty, we have from the beginning and we are concerned that a treaty designed to increase the access of the visually impaired to printed materials is being used by anti-copyright groups to erode long-standing international regimes. The VIP treaty charts new territory in that it is a treaty of exceptions; its novelty makes it all the more important that it remain consistent with existing international treaties. The issues being negotiated as part of this conversation stand to have a serious impact on copyright law. That’s why we don’t feel this is the appropriate vehicle to attempt to explore complicated issues like, for example, the exportation of US fair use standards to other countries. Our hope is that negotiators will focus on and achieve the goal of increasing access for the visually impaired and set issues that are not integral to getting this treaty done aside.

Jim Fruchterman is the founder of Bookshare, an initiative of the Silicon Valley-based nonprofit Benetech, which makes about 193,000 book titles available to the blind in the United States. Bookshare, he said, is taking advantage of U.S. copyright law, which allows for the reproduction of books without the permission of a copyright holder for the exclusive purpose of making it available to the seeing impaired. That is accomplished by digitizing books, transforming them into a read-aloud format and, among other ways, by enlarging the text or converting it to Braille.

In a nutshell, the treaty before the World Intellectual Property Organization would grant the global community that right, and allow for the international sharing of those works.

That’s a scary proposition to an industry that relies on intellectual property for its profits.

“Our IP industries do not want the rest of the globe to have things like fair use and copyright exemptions. It’s a loosening of the control of intellectual property,” Fruchterman said. “Anything that helps poor people on IP is a threat.”

Those with the most at stake immediately are the book publishers.

At its core, publishers don’t trust the developing world — with its lax intellectual-property policies — to be granted the power to reproduce their works without permission.

“How trustful would you be they are going to implement in good faith?” asked Allan Adler, the lobbyist for the Association of American Publishers.

He shares the the worries of many rights holders that the measure is one giant slippery slope, and that international-treaty copyright norms won’t be followed.

Among the biggest fears by rights holders is that the treaty might export abroad the U.S. concept of fair use. It’s a complicated exemption in U.S. copyright law that allows for the reproduction of copyrighted works for limited uses without permission.

Rights holders fear that without the adoption of the so-called international “three-step” test, the treaty might allow signing nations to declare fair use as the mechanism to be used to grant the blind, and perhaps others, more special exemptions to copyrights.

The esoteric three-step test, which is a part of existing global copyright treaties, requires treaty members to agree that, when limiting copyright, it must be for special cases, it must not produce conflicting markets and it must not prejudice commercial interests.

Adler wants the international community to require that, once book publishers themselves make a book commercially available to the blind, the book could no longer be reproduced for the blind without permission. He also wants the World Intellectual Property Organization, an agency of the United Nations, to build a public database telling the public where works for the blind “can be commercially obtained.”

He also wants some accountability into who gets to reproduce eligible books, in which the treaty is vague. What’s more, he wants a venue to settle copyright disputes of piracy if suspected.

“To handle somebody else’s valuable property without their permission, all we are saying is, don’t you think it’s a reasonable measure of accountability that there is a vehicle to address claims?” Addler asked. “I fail to see how that is an unreasonable request.”

Addler said if this treaty isn’t done right, intellectual property could be at stake because, around the corner, there is an international proposal to be debated that would exempt libraries from national copyright restrictions globally.

Bookshare’s Fruchterman is mocking the position of rights holders. “No blind person on the planet should be able to borrow a book from the library if they can pay for it?” he asked.

“They say they support this treaty, but that they have these various concerns that X, Y and Z has to be fixed. That’s Washington doublespeak,” Band said. “This is a very simple treaty. The concepts are very simple. There’s been a lot of needless complication introduced. I think some of it has been intentionally done to muck things up.”

For the blind, they say politics could hamper a human rights issue that affects some 280,000 visually impaired people globally.

Fredric Schroeder, a blind man who is the first vice president for the National Federation of the Blind and for the World Blind Union, said the treaty is critical, especially in developing countries that would get access to books reproduced in the West.

“If we don’t get pass the impasse,” he said, “it would have the potential of harming or even blocking a treaty from being agreed to.”
Posted by Mercury at 7:31 AM

Email ThisBlogThis!Share to TwitterShare to FacebookShare to Pinterest
Labels: copyright, electronic books for the blind