5 tons of TNT equivalent brightens a spot on the Moon 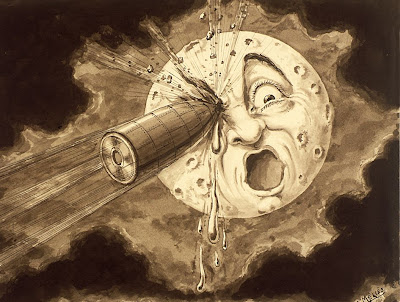 Not as dramatic as depicted in Georges Méliès' Le Voyage Dans la Luna [1902], but rather spectacular.

"Bright Explosion on the Moon"

For the past 8 years, NASA astronomers have been monitoring the Moon for signs of explosions caused by meteoroids hitting the lunar surface. "Lunar meteor showers" have turned out to be more common than anyone expected, with hundreds of detectable impacts occurring every year.

They've just seen the biggest explosion in the history of the program.

"On March 17, 2013, an object about the size of a small boulder hit the lunar surface in Mare Imbrium," says Bill Cooke of NASA's Meteoroid Environment Office. "It exploded in a flash nearly 10 times as bright as anything we've ever seen before."

Anyone looking at the Moon at the moment of impact could have seen the explosion--no telescope required.  For about one second, the impact site was glowing like a 4th magnitude star.

Ron Suggs, an analyst at the Marshall Space Flight Center, was the first to notice the impact in a digital video recorded by one of the monitoring program's 14-inch telescopes.  "It jumped right out at me, it was so bright," he recalls.

Cooke believes the lunar impact might have been part of a much larger event.

"On the night of March 17, NASA and University of Western Ontario all-sky cameras picked up an unusual number of deep-penetrating meteors right here on Earth," he says. "These fireballs were traveling along nearly identical orbits between Earth and the asteroid belt."

This means Earth and the Moon were pelted by meteoroids at about the same time.

“My working hypothesis is that the two events are related, and that this constitutes a short duration cluster of material encountered by the Earth-Moon system," says Cooke.

One of the goals of the lunar monitoring program is to identify new streams of space debris that pose a potential threat to the Earth-Moon system.  The March 17th event seems to be a good candidate.

Controllers of NASA's Lunar Reconnaissance Orbiter have been notified of the strike.  The crater could be as wide as 20 meters, which would make it an easy target for LRO the next time the spacecraft passes over the impact site.  Comparing the size of the crater to the brightness of the flash would give researchers a valuable "ground truth" measurement to validate lunar impact models.

Unlike Earth, which has an atmosphere to protect it, the Moon is airless and exposed.  "Lunar meteors" crash into the ground with fair frequency. Since the monitoring program began in 2005, NASA’s lunar impact team has detected more than 300 strikes, most orders of magnitude fainter than the March 17th event.  Statistically speaking, more than half of all lunar meteors come from known meteoroid streams such as the Perseids and Leonids.  The rest are sporadic meteors--random bits of comet and asteroid debris of unknown parentage.

U.S. Space Exploration Policy eventually calls for extended astronaut stays on the lunar surface.  Identifying the sources of lunar meteors and measuring their impact rates gives future lunar explorers an idea of what to expect. Is it safe to go on a moonwalk, or not?  The middle of March might be a good time to stay inside.

"We'll be keeping an eye out for signs of a repeat performance next year when the Earth-Moon system passes through the same region of space," says Cooke. “Meanwhile, our analysis of the March 17th event continues.”

Footnote: (1)  The Moon has no oxygen atmosphere, so how can something explode? Lunar meteors don't require oxygen or combustion to make themselves visible.  They hit the ground with so much kinetic energy that even a pebble can make a crater several feet wide.  The flash of light comes not from combustion but rather from the thermal glow of molten rock and hot vapors at the impact site.

Email ThisBlogThis!Share to TwitterShare to FacebookShare to Pinterest
Labels: astronomy, Moon impact May 2013