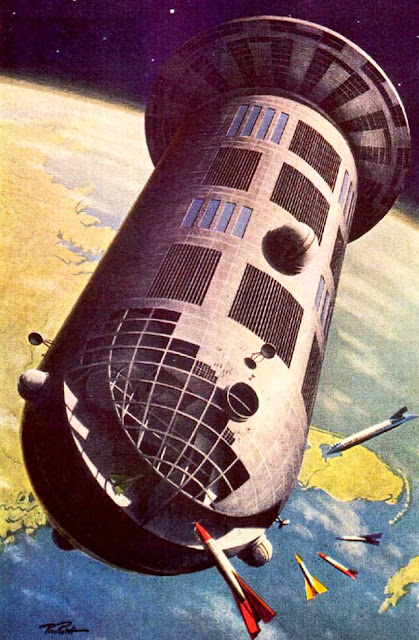 "The Space City That Could Have Been, If Not For Wernher Von Braun"

And this was two decades before Gerard K. O'Neill proposed his famous L5 space colony plans.

Romick published this work at about the same time Wernher von Braun was making headlines with what has come to be known as the "Collier's space program". Not only was von Braun's vision of future spaceflight reproduced in books and magazines all over the world, the spacecraft he designed in conjunction with Chesley Bonestell became the gold standard for spaceships for many decades. They influenced everything from movies to TV (see Disney's "Man in Space" series for starters) [see below], from pulp magazines to toys.

Overwhelmed by all this publicity was Romick's plan, which made everything von Braun wanted to do seem picayune. Like von Braun, Romick's scenario depended on a three-stage space shuttle. Unlike von Braun, however, each stage of Romick's "Meteor" was a piloted, reusable spacecraft. The Meteor orbiter was the nucleus of the grandest part of Romick's scheme.

A series of orbiters would be launched into orbit. As each spacecraft arrived, they would be attached alternately nose-to-nose and tail-to-tail, eventually creating a long cylinder.

Around this core would be constructed an enormous space station, dwarfing the 200-foot wheel von Braun wanted to create. Romick's colony would consist of a huge, zero-gravity cylindrical "dry dock" over 1500 feet long and 1000 feet in diameter. It would have a total volume of about 3 billion square feet. At one end would be a 1500-foot rotating disc that would be inhabited by 20,000 people. A rotation rate of 2 rpm would provide 1g of artificial gravity. "Movement at [this rate]," Romick mused, "would give a somewhat majestic motion for this large wheel."

The distance around the perimeter of the giant wheel would be nearly a mile. Unlike the space station in "2001: A Space Odyssey", the floors would not appear to be curved. Indeed, "a room would have to be 13 feet long to give a 1 degree total change in floor level."

The colony's 82 floors would contain apartments, stores, churches, schools, gymnasiums and theaters as well as its own TV stations and newspapers.

Power would be derived from the 12 acres of solar panels that cover the main cylinder.
At a rate of two shuttle launches a day, he estimated that initial construction would take about four months with about three years required to bring the wheel to its final enlargement (though it would be in service continuously the entire time).

Romick also looked further ahead than von Braun in assuming that people would eventually want to travel into space not only as tourists but immigrants.

"The station", Romick claimed, would be "capable of providing safe, comfortable living accomodations similar to those on the ground for thousands of inhabitants, as well as affording them recreational facilities and cultural experiences not available on earth. The view from the living-room window would be sensational..."
Romick's design provided for quarter-gravity and zero-gravity gymnasiums, "which would be most interesting and stimulating."

Romick figured the round-trip cost to the space station for passengers to be $50,000 and mail at 75 cents an ounce going up and 15 cents coming down.

"A large, inhabited satellite terminal," Romick concluded, "can certainly be constructed—-a glistening 'city in the sky'...And it can be a visible symbol, as it grows of the great promise of new service, new knowledge, inspiration and accomplishment for all mankind. Its potential seems unlimited—a stepping-stone to the moon, to the planets, and beyond."