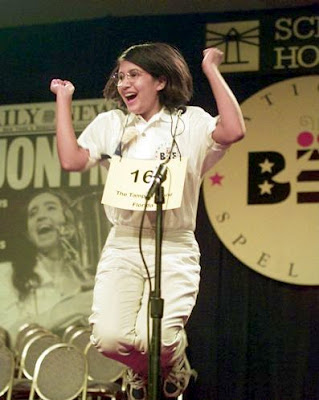 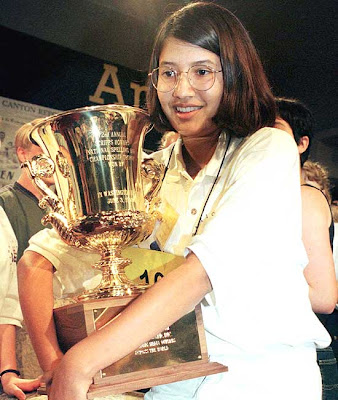 Of the 85 kids who have won the National Spelling Bee, only one became an instant movie star.

For the millions who watched back in 1999, her face is frozen in time. She'll always be the 14-year-old girl from Tampa, Fla., with the glasses and dark shoulder-length hair, her arms raised while leaping for joy.

But that was a half-life ago for Nupur Lala. Like all bee winners, she's since had to deal with the perks, drawbacks and stereotypes that come with the title — all magnified because she won the same year the competition was featured in an Oscar-nominated documentary.

She became a role model for those who realized it's OK to be nerdy. She became a trend-setter, starting a run in which 10 of 14 national bee winners have been Indian-American, including the last five.

Today, she's 28 and finishing up a master's degree in cancer biology with plans to enroll in the University of Texas Medical School in Houston, having changed course from a career plan that had her researching memory and the brain for three years at MIT. She now aspires to be a physician scientist.

"My intellectual inspirations are so meandering. I blame that on the Spelling Bee sometimes," Lala said with a laugh. "There are so many interesting things in the dictionary to study."

Lala will be watching this week when the 86th Scripps National Spelling Bee takes place near the nation's capital — her friends tease that her life "shuts down" during the bee — but she'll see a spectacle that's changed much since she graced the stage. The finals are now broadcast in prime time. A vocabulary test is being added this year for the first time. And the bee's popularity has skyrocketed, in part because of Lala and the other spellers featured in the documentary "Spellbound," a film that made smart people cool long before "The Big Bang Theory."

"I'm amazed at the sea change," Lala said in a telephone interview. "Because when I was a speller, that was one thing you totally hid. I remember like not even wanting to tell people what I was doing over the weekend when I was competing in the regional spelling bee. It was that big of a liability. And now I see that, yeah, people want to be nerds. I think that's great."

Lala is the first to say that winning the national bee has been an overwhelming positive in her life, even if does get tiresome to have people repeatedly asking her to spell her winning word — "logorrhea" — or to realize that her reputation can unfairly put her on a pedestal in an academic setting.

"I've had people say 'I expect more of you because I've seen what you are capable of,'" Lala said. "And that's a huge honor — and also very daunting."

Then there's another set of emotions she feels every year when her name is mentioned by the Indian-Americans youngsters who now dominate the national bee. All of the recent winners, to some degree, have cited Lala as an inspiration.

"It's absolutely overwhelming," she said. "And I think especially as I've grown older and seeing how much I've wanted to emulate people in my life. Yeah, it's very humbling every time I hear that. It feels like a lot of responsibility, to be perfectly honest. You become very conscious of that."

There have also been a disproportionate number of recent winners interested in the brain and medicine, including several who said they wanted to grow up to be neurosurgeons. Lala pursued an undergraduate degree in brain, behavior and cognitive sciences at the University of Michigan, in part because of her experiences from the bee.

"Why do I remember certain words and not others? Why isn't my memory so good for everything else?" she said. "That question sort of drew me into research."

At least much of the terminology was familiar. After studying all those big words for the bee, a standard vocabulary test is a breeze.

"I remember taking the GRE years ago," she said, "and how I had such an edge over other competitors because I basically studied the vocabulary component for the Spelling Bee."

National Spelling Bee champions are a small and tight-knit group — Lala keeps tabs with many of her fellow winners — and she marvels that she had the nerve to pull off her win all those years ago. She turned down a chance to be featured on an MTV reality show that wanted to follow her through college; she wasn't comfortable with the idea and didn't feel she was crazy enough to be interesting.

Besides, there is life beyond the bee — and the public perception of what a bee winner should be — and that's where Lala prefers to keep her focus, at least during the 51 weeks a year when she's not glued to the television to see another successor crowned. Like Lala, this week's champion will have a winning moment etched in America's collective conscious and immortalized on the Internet, lasting long after he or she has grown up to pursue an impressive degree or career.

"It's something that you fight quite a bit," Lala said. "Especially now that I feel like I'm on a career path, it's becoming a little bit easier. ... People always thought of me as this nerdy, excitable, just-an-awkward kid. Now they can see me as somebody beyond that, I hope."

It could help lexicomanes participating in this year's Scripps National Spelling Bee to be a little sesquipedalian.

The nearly 300 spellers who will come together next week at the 2013 Scripps National Spelling Bee will have to survive tougher challenges to make it to the championship rounds.

When the competition begins on Tuesday in National Harbor, Md., the spellers in Round One will face the traditional 24-word written spelling test with a twist: It will now include three separate sections of vocabulary words for competitors to define.

And when the first day of public spelling begins on Wednesday, spellers will no longer have a chance to spell two words before facing elimination at the end of Round Three. The dreaded elimination bell will go off the first time they misspell a word in Round Two.

Only 50 children will survive the three preliminary rounds to go on to the semifinals. Even if they spell both words correctly on stage, contestants can still be eliminated based on how well they performed on the written test, which they take on a computer.

Spellers who move on to the semifinals will take a second computerized test — another new requirement — that has more spelling and vocabulary questions. That will be followed by two more rounds of spelling on Thursday. Only about 12 spellers will earn enough points to move on to the championship finals.

"In regards to vocabulary being added to the tests, it's a big change but a natural one that has largely been embraced by our spellers and their parents," Kemper said. "A lot of the spellers were already studying definitions to help them learn their words."

The champion will receive a $30,000 cash prize and the Scripps National Spelling Bee engraved trophy; a $2,500 U.S. savings bond and a complete reference library from Merriam-Webster; and $2,000 worth of reference works from Encyclopaedia Brittanica.

Past winners have sometimes been invited to the White House to meet the president and appeared on late-night talk shows. The 2012 champion was Snigdha Nandipati of San Diego.

This year, the 281 spellers are coming from all 50 states and the District of Columbia as well as Japan, South Korea, China, the Bahamas, Jamaica, Ghana, Canada, Puerto Rico, Guam, American Samoa, the U.S. Virgin Islands and U.S. Department of Defense Dependents Schools in Europe.

Kemper said the bee continues to grow in popularity. Scripps has been sponsoring the national competition for 70 years.

"People enjoy the competition, and we can all relate to what it's like to be a 13- or 14-year-old child," he said. "I think people also see how incredible these children are. They're amazing."

There are 147 girls and 134 boys ranging in age from 8 to 14 competing in the bee. The youngest speller is 8-year-old Tara Singh of Louisville. Nearly 90% of the children are ages 12 to 14. Spellers cannot compete beyond the eighth grade.

Most of the spellers — more than 63% — come from public schools. Nineteen percent come from private schools, and nearly 9% are home-schooled. Math — not English — is most frequently cited as the spellers' favorite subject.

More than 60 of the spellers have competed in the national bee before.

"There's a great camaraderie among the spellers," Kemper said. "You see that when they ask each other to sign their autograph books and give each other high-fives on the stage when they spell their words correctly. It's not one speller against another. It's all of them against the dictionary."

The championship rounds will be broadcast live on ESPN beginning at 8 p.m. Thursday.

[In times past they were broadcast by ABC.]
Posted by Mercury at 10:27 AM