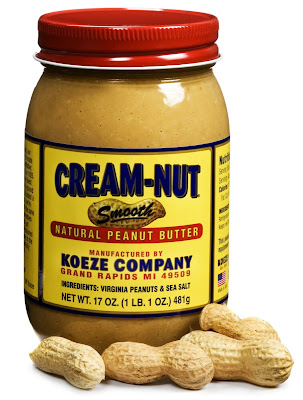 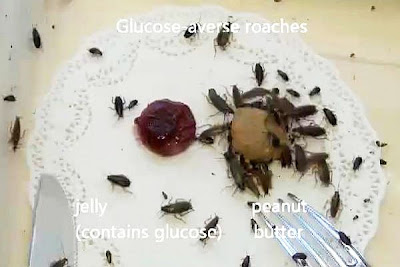 This image made from video provided by Ayako Wada-Katsumata shows glucose-averse German cockroaches avoiding a dab of jelly, which contains glucose, and favoring the peanut butter. For 30 years, people have been getting rid of cockroaches by setting out sweet-tasting bait mixed with poison. But in the early 1990s, a formerly effective product stopped working. Later studies showed that these roaches were specifically turned off by the sugar glucose in the syrup and that the key is an altered behavior of certain nerves that signal the brain about foods.

"How cockroaches evolved so as to bypass 'roach motels'"

Chalk up another point for the nearly invincible cockroach. Some roaches have lost their sweet tooth for certain sugars, commonly used to bait poison traps, through genetic adaptation.

If you're a cockroach whose ancestors have scurried across the planet essentially in modern form for the past 146 million years, it's a safe bet you've learned a thing or two about survival.

Now, researchers have uncovered one secret to that survival, especially in the face of human exterminators. It's all in the bugs' equivalent of taste buds. Over a remarkably short time, the genetics behind their taste buds have shifted in ways that signal "poison ahead," even when the poison is baited with a form of sugar known as glucose.

"We don't know if glucose actually tastes bitter" to roaches that have evolved to avoid the sugar, notes Coby Schal, an entomologist at North Carolina State University and a member of the team conducting the study. But the team did find that when these roaches tasted glucose, the action fired up tiny taste sensors that respond exclusively to bitterness. The bugs dropped what they were about to eat and beat feet to hunt for more palatable morsels.

A relative handful of entomologists has been studying roaches for years, largely with the aim of finding more-effective ways to eradicate the pests. The bugs find nourishment in everything from food scraps to dirty laundry. Roach infestations can represent a health threat as well, researchers say, by spreading diseases.

Beyond the yuck factor, which is enormous, the creatures also display some remarkable traits. Scientists note that they can live life as hermits or in extended families whose fathers and mothers are monogamous. They can breathe intermittently, holding their breath for up to seven minutes as a way to conserve body moisture that might otherwise escape as they exhale.

And they serve as ubiquitous models for studying a range of biological functions they share with other insects.

Indeed, the Human Genome Sequencing Center at Baylor University's Texas Medical Center in Houston currently is working to sequence the genome of the German cockroach to better understand what makes these pests tick.

For its part, the North Carolina State University team has focused on the taste mechanisms that cockroaches employ. The study is the first to show how an insect's cellular tools – in this case, taste receptors – control its ability to adapt to changes in its environment. In this case, the change is the arrival of baited poison.

In the mid-1980s, exterminators shifted from sprays to bug traps to deal with roaches. But within six or seven years, the roaches increasingly avoided the traps, despite the sugary come-hither coatings on the poison that the traps contained. The bugs had become glucose-averse.

Jules Silverman, another member of the team, found that the aversion was handed down from one generation to another, and so concluded that the emergence of glucose aversion stemmed from a genetic change in the population of bugs exhibiting the aversion.

The current study, led by Ayako Wada-Katsumata, also at North Carolina State, focused on the bugs' taste mechanism because of its relationship to eradication efforts. The team compared the taste-related behavior of the sugar-shunning roaches with roaches that still readily accepted glucose as sweet.

A roach's taste buds actually are tiny hairs on appendages near its mouth. Some hairs are sensitive to sweet, others to bitter. But even the hairs responsive to sweet have a mix of sensors on them – one for sweet, one for bitter, and two that sense both tastes. The hairs most sensitive to sweet also can distinguish between glucose and another sweetener, fructose.

These "sweet" hairs and their mix of sensors were the focus of the study.

The team first analyzed the sweet-hair responses of roaches not averse to glucose, then turned their attention to the glucose-avoiders.

The researchers are now trying to figure out whether the aversion trait evolved internally within the averse populations, whether the trait actually is an ancient, dormant tool for picking good food from bad reawakened by extermination efforts, or whether it came about through interbreeding with populations that were naturally glucose-averse.

As for exterminators, the team recommends not one attracting agent, not two, but a "smorgasbord" of attractants to baffle a bug that "learns" quickly and retains those lessons down the generations.
Posted by Mercury at 11:56 AM