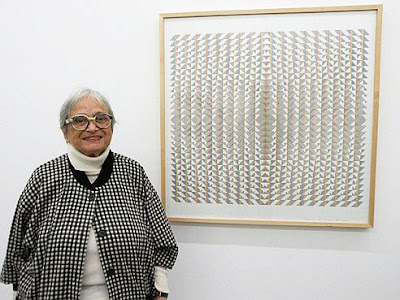 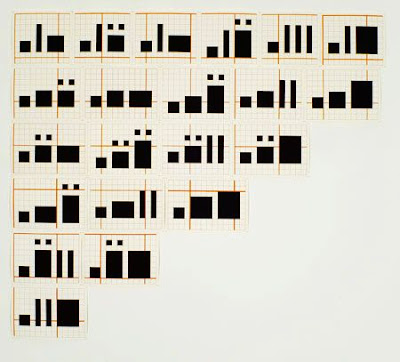 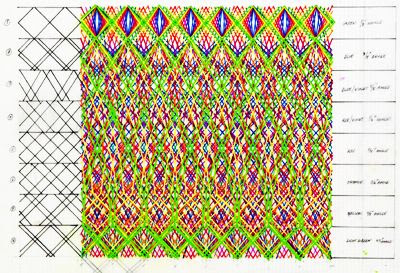 The L.A. native's approach was distinguished by its unusual combination of conceptual complexity and visual dynamism, even sensuality.

Channa Horwitz, an artist known for her dizzyingly intricate geometric drawings and paintings based on complex predetermined systems, died Monday of complications from Crohn's disease at St. John's Health Center in Santa Monica. She was 80.

In 1968, while still a student, Horwitz proposed a project for the Los Angeles County Museum of Art's seminal exhibition "Art and Technology" that would have involved collaborating with engineers to suspend eight large, free-floating Plexiglas beams within the space of a magnetic field, accompanied by eight beams of light that would fluctuate in intensity depending on the position of the beams.

The project was not accepted — curator Maurice Tuchman later stated, according to the artist, that he did not believe women should be allowed to work with such industrial elements — but the drawing that Horwitz produced to graph the sequences of the light beams' movements became the basis for a series that she would pursue throughout her life. She called it Sonakinatography.

As she wrote in the magazine Flash Art in 1976: "I have created a visual philosophy by working with deductive logic. I had a need to control and compose time as I had controlled and composed two-dimensional drawings and paintings. To do this, I chose a graph as the basis for the visual description of time. I gave the graph a value: one inch became one beat or pulse in time. Using this graph, I made compositions that depicted rhythm visually."

Horwitz's approach was distinguished by its unusual combination of conceptual complexity and visual dynamism, even sensuality. Times art critic Christopher Knight described her works in a 2012 review as "patterned Minimalist drawings that breathe, pulsate and visually warp in most un-Minimalist ways. One colored dot follows another on big gridded sheets of graph paper. Systemic logic, which sustains industrial and digital societies, visually pops and fizzes, becoming a bountiful ritual chant."

Horwitz was born Channa Helene Shapiro in Boyle Heights on May 21, 1932, the first of two daughters. Her father, Louis Shapiro, was a self-taught electrician who developed and manufactured a line of blow-dryers used for pet grooming, founding the company Edemco. She began drawing at a young age.

After marrying and while raising three children, she took classes at Art Center School in Los Angeles (now Art Center College of Design) and Cal State Northridge. In 1972 she received a bachelor's degree from CalArts, where she studied with the renowned performance artist Allen Kaprow, participating in many of his "happenings." She created a happening of her own in 1971, transforming a staircase at the school into a grid of numbered and colored squares corresponding to one of her Sonakinatography drawings, arranging for dancers to move between them in a series of eight choreographed motions — a form of cross-media translation that she undertook on numerous occasions thereafter, often in collaboration with other artists.

Though closely aligned with the work of conceptual and minimalist artists like Sol Lewitt, Mel Bochner and Agnes Martin, Horwitz worked in relative isolation for much of her career, without the public acclaim those artists enjoyed. That tide has shown signs of turning, however. She has had several shows in Germany in recent years, and was featured in the Hammer Museum's biennial Made in L.A. in 2012. In the last few months, she was awarded a Guggenheim Fellowship and invited to participate in this year's Venice Biennale. Her most recent show is up through June 8 at Francois Ghebaly Gallery in Culver City.

Anne Ellegood, senior curator at the Hammer Museum, met Horwitz in 2010 and was drawn to her work immediately. "I am impressed by her commitment to her practice over a very long period of time," she said, "often with little critical, curatorial or commercial recognition. I admire the fact that once she identified a working methodology that both provided her with structure and infinite space for exploration, she stuck with it. She never wavered from her commitment to her work."

In the early 1960s Channa Horwitz (b. 1932 Los Angeles) made a discovery that was crucial for her artwork: by limiting her visual language to simple logical systems and sequences, she could open herself to innumerable possibilities. Her embrace of a rules-based conceptualism gave her an enormous sense of freedom, and she has been making geometric abstract drawings and paintings employing predetermined systems ever since. Seeking to capture time and motion—she dubbed her series of drawings initiated in the 1960s Sonakinatography to reflect her commitment to sona (sound) and kina (movement)—Horwitz lays down her drawings on graph paper, the lines and squares rendered in deep black or the colors of the spectrum to create oftentimes deliriously intricate patterns. The logic of her renderings is quickly usurped by a sense of awe about the great mysteries of life and the inevitable entwining of chance and structure that characterizes daily existence. For all their conceptual rigor, her remarkable drawings undulate with great rhythm and intensity. The selection for Made in L.A. includes examples from Horowitz’s series Sonakinatography, Canon, and Matrix, demonstrating the range of her remarkable output over the past five decades.
Posted by Mercury at 8:34 AM