The heat is on for Bill Nye 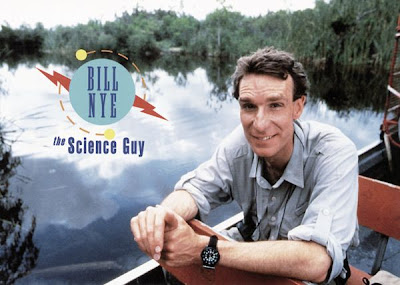 Last week, Bill Nye, best known as TV's 'Science Guy,' created quite a stir when he appeared in a video for the website the Big Think, in which he declared that a belief in creationism was bad for children. Now, after the video has gone viral (over 1.6 million hits and counting), a lot of attention (and criticism) has come down on Nye for his view

Appearing on CBS This Morning, Nye is fighting back against his critics, declaring that he was not attacking religion at all, but is merely trying to promote science.

Speaking on the science vs. religion struggle, Nye stated that "You can believe what you want religiously. Religion is one thing, but science, provable science is something else,” adding that “you want people to believe in science, this process, this great idea that humans had to discover more about the universe and our place in it, our place in space.”

Turning to current events to illustrate his point, Nye focused on Hurricane Issac, stating that “this morning, talking about Hurricane Isaac, and we're watching satellite maps made with spacecraft orbiting the earth, and this all comes from science. If you have this idea that the earth is only 6,000 years old, you are denying, if you will, everything that you can touch and see. You're not paying attention to what's happening in the universe around you. As I say, this is bad for kids."

Basically, Nye is saying that people can believe in whatever they want to in terms of religion, but that religion should not be confused with science.

As for what is supposed to be taught in schools, Ohio has implemented academic content standards for all core school subjects, including science. The goal of these standards is to ensure that teachers are teaching the same content in every school at any given grade level. By looking at the Ohio science standards, one sees no reference to creationism/intelligent design, only evolution, to which there are over a dozen in just the high school grades alone. Besides scientific facts, the Ohio standards also emphasize the scientific method, which makes no room for including one's preconceived notions in scientific research. .

Now, one may be asking “what does all of this have to do with astronomy and space? Answer: plenty.

Like biology, astronomy is a subject that has had a history of conflicting with religion and, even now, can shock the sensibilities of some, particularly religious fundamentalists, who continue to hold onto the belief that the world was created in a matter of days and that the age of the Earth can be determined by counting back the years as given in holy books. Just as anyone committed to the correct teaching of science would be appalled at the lack of evolution in biology, a same revulsion would occur if the Big Bang along with solar system formation were taught side by side with the account in Genesis, or skipped altogether, in an astronomy class. Needless to say, omitting these two most basic of processes would do as major a disservice to any astronomy student as glossing over evolution or teaching it in tandem with a most nonscientific idea as creationism would do to anyone learning biology.

Needless to say, if biology teachers are too afraid to teach evolution through either personal ignorance or risk of offending someone, what's not to say that astronomy teachers will become the same way if the religious decide to get up in arms over the Big Bang or solar system formation? It's a scary thought but, considering the social climate of the country we live in, it may not be an impossibility, especially considering that the U.S. is an anomaly in the Western world wherein belief in creationism far outweighs that in evolution.

As a final thought, consider the following: in science, if there is any commandment, it is this: respect the facts. No matter what we want the world to be or what our preconceived notions are, the world is the way it is, inflexible to human will. If one truly wishes to assume a scientific mindset, he/she must have respect for facts, no matter how contrary to personal beliefs they are. In the case of both evolution and the Big Bang, all facts point towards the scientific theories, not the religious dogma, being the truth. Yes, there are many great things about religion, such as ethical principles, its function as a social bonding agent, influence on the arts, and many others. However, religion is not science and it should be kept out of the science classroom.

The video is at this link...

Some thoughts by Bill Nye regarding creationism, evolution, and science