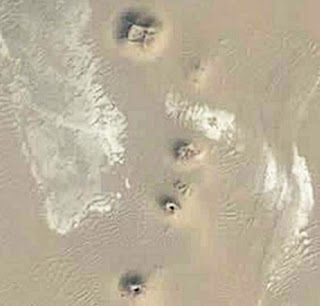 DiscoveryNews
Two possible pyramid complexes might have been found in Egypt, according to a Google Earth satellite imagery survey.Located about 90 miles apart, the sites contain unusual grouping of mounds with intriguing features and orientations, said satellite archaeology researcher Angela Micol of Maiden, N.C.One site in Upper Egypt, just 12 miles from the city of Abu Sidhum along the Nile, features four mounds each with a larger, triangular-shaped plateau.The two larger mounds at this site are approximately 250 feet in width, with two smaller mounds approximately 100 feet in width.The site complex is arranged in a very clear formation with the large mound extending a width of approximately 620 feet -- almost three times the size of the Great Pyramid."Upon closer examination of the formation, this mound appears to have a very flat top and a curiously symmetrical triangular shape that has been heavily eroded with time," Micol wrote in her website Google Earth Anomalies.Intriguingly, when zooming in on the top of the triangular formation, two circular, 20-foot-wide features appear almost in the very center of the triangle.Some 90 miles north near the Fayoum oasis, the second possible pyramid complex contains a four-sided, truncated mound that is approximately 150 feet wide."It has a distinct square center which is very unusual for a mound of this size and it almost seems pyramidal when seen from above," Micol wrote.Located just 1.5 miles south east of the ancient town of Dimai, the site also contains three smaller mounds in a very clear formation, "similar to the diagonal alignment of the Giza Plateau pyramids," Micol stated in a press release."The color of the mounds is dark and similar to the material composition of Dimai's walls which are made of mudbrick and stone," the researcher wrote.Founded in the third century B.C. under the Ptolemaic king Ptolemy II Philadelphus (309 B.C.–246 B.C.), Dimai was built on top of an earlier neolithic settlement.Also known as Dimeh al-Siba, Dimeh of the Lions, the town is surrounded by a mudbrick wall that stretches up to 32 feet high and 16 feet thick, and features at its center a ruined stone temple dedicated to the crocodile god Soknopaios.Indeed, the town's Greek name, Soknopaiou Nesos, means "Island of Soknopaios."Well known to scholars for the amount of papyri and other inscribed material found among its ruins, Dimai reached its peak during the first and second century A.D. thanks to a major trade route. It was abandoned during the mid-third century A.D.According to Micol, both sites have been verified as undiscovered by Egyptologist and pyramid expert Nabil Selim, whose findings include the pyramid called Sinki at Abydos and the Dry Moat surrounding the Step pyramid complex at Saqqara.Selim found that the smaller 100-foot mounds at the site near Abu Sidhum are a similar size as the 13th Dynasty Egyptian pyramids, if a square base can be discovered."The images speak for themselves. It's very obvious what the sites may contain but field research is needed to verify they are, in fact, pyramids," Micol said.The researcher has previously located several possible archaeological sites with Google Earth, including a potential underwater city off the coast of the Yucatan peninsula.She believes the use of infrared imagery will allow scientists to see the extent of the complexes in greater detail.The sites have been sent to Egyptologists and researchers for further investigation and "ground truthing," she said.