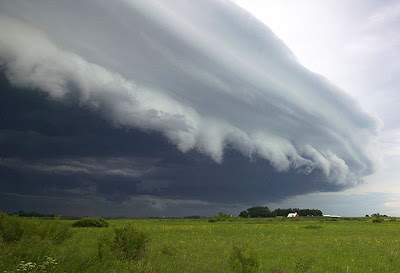 Shelf cloud, Minnesota, US. When seen from the ground shelf clouds appear as low, wedge-shaped clouds and are usually associated with severe thunderstorms. 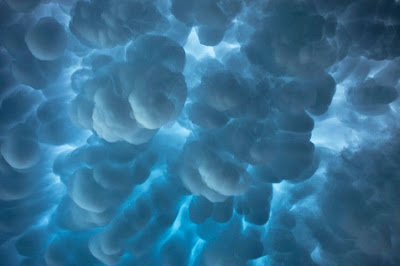 South Dakota, US: Mammatus clouds over South Dakota. Mammatus is a meteorological term applied to a cellular pattern of pouches hanging underneath the base of a cloud. 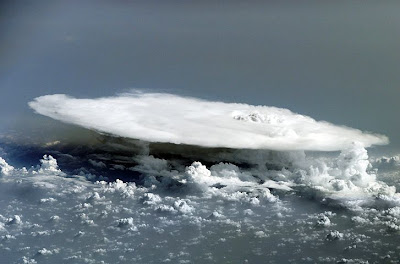 Cumulonimbus cloud over western Africa, taken from the International Space Station (ISS). Cumulonimbus clouds rise vertically until they hit a natural barrier, known as the tropopause (the atmospheric boundary between the troposphere and the stratosphere), and then flatten out. Cumulonimbus usually herald a severe storm. 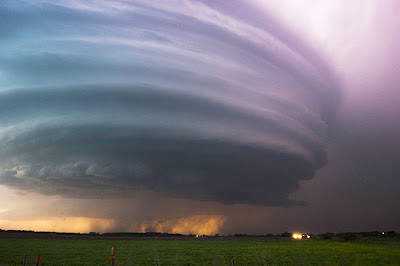 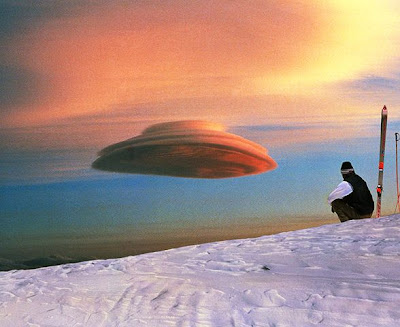 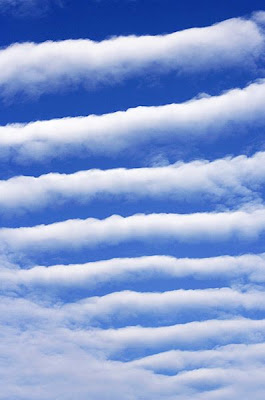 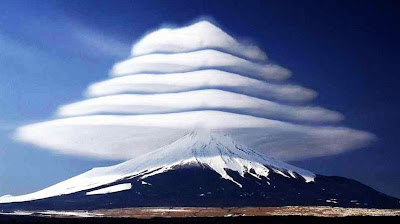 And this from NASA...

Undular bore waves over Iowa, Oct. 3, 2007. Those giant waves—"undular bore waves"—were photographed Oct. 3rd flowing across the skies of Des Moines, Iowa. "Wow, that was a good one!" says atmospheric scientist Tim Coleman of the National Space Science and Technology Center (NSSTC) in Huntsville, Alabama. Coleman is an expert in atmospheric wave phenomena and he believes bores are more common and more important than previously thought.But first, Iowa: "These waves were created by a cluster of thunderstorms approaching Des Moines from the west," he explains. "At the time, a layer of cold, stable air was sitting on top of Des Moines. The approaching storms disturbed this air, creating a ripple akin to what we see when we toss a stone into a pond."Undular bores are a type of "gravity wave"—so called because gravity acts as the restoring force essential to wave motion. Analogy: "We're all familiar with gravity waves caused by boats in water," points out Coleman. "When a boat goes tearing across a lake, water in front of the boat is pushed upward. Gravity pulls the water back down again and this sets up a wave."Playing the role of boat, the thunderstorms tearing across Iowa on Oct. 3rd spawned a train of four waves. What's so important about all this?"Undular bores may play a surprising role in severe weather," says Coleman."For one thing, we believe undular bores can amplify tornadoes." He cites as an example an F5 tornado that struck the outskirts of Birmingham, Alabama, in April 1998. "At first the tornado was doing relatively little damage. But our research shows that, just before the tornado reached Birmingham, it was hit by an undular bore." The wave spun up the twister, increasing its intensity and size; the tornado went on to wreck more than 1000 homes and business totaling $200 million in damage. Tornado-wave interactions are the subject of Coleman's PhD dissertation, which he is completing now under the direction of University of Alabama-Huntsville professor Kevin Knupp."Furthermore," he says, "undular bores may be a source of thunderstorms." That's right, thunderstorms make undular bores and undular bores return the favor. "These waves churn up the atmosphere, causing instabilities that can initiate and sustain severe storms."Although few people have witnessed undular bores with their own eyes, Coleman believes they're common. "An undular bore passes over any given point in the United States about once a month," he estimates. Often they occur at night when temperature inversions create a layer of cool stable air near the ground—much like the layer over Des Moines—ripe for rippling."Last year I saw a nighttime undular bore lit up by the nearly full Moon right outside my front door—that was cool," says Coleman.Typical waves measure 5 miles from peak to peak and race across the sky at 10 to 50 mph. "Yes, you could chase them in your car—although I wouldn't recommend it." The waves don't always travel along established roadways.But just in case they do want to chase one, Coleman's colleagues led by Kevin Knupp have a mobile weather station waiting in the parking lot of the NSSTC. The MIPS—short for Mobile Integrated Profiling System—is equipped with a radar, a laser, a microwave radiometer and other instruments which can measure wind, temperature, pressure, aerosols and water vapor content in vertical columns up to 10 km high."I can't want until the next wave comes by," says Coleman, not bored at all.
Posted by Mercury at 10:19 AM