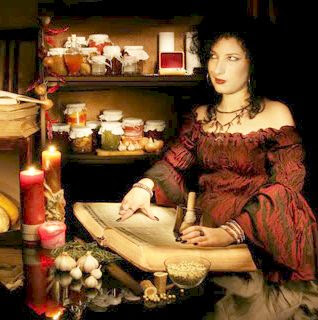 Not long ago George Brett of the Kansas City Royals and his brother were sued to cease from selling rings and bracelets that were supposed to have curative powers. Now eBay is being heavy handed and doing the following. Well, Caveat emptor or as P. T. Barnum said..."There's a sucker born every minute." There are people who believe the powers of spells, potions, and devices.

A foole & his money,
be soone at debate:
which after with sorow,
repents him to late.
Thomas Tusser in Five Hundreth Pointes of Good Husbandrie, 1573.
Now where are the sane going to get their gag gifts?
"eBay Bans Sales of Spells, Curses, Advice and Other ‘Intangibles’"
by
Liat Clark
August 17th, 2012
Wired
Haunted gypsy rings, a portal to the realm of the immortals and creepy ’40s dolls that promise to “come alive” will soon have to find a new home, along with nearly 100,000 other products, after eBay announced it would be banning the sale of items classed as metaphysical.The online auction house announced the changes as part of a routine cleanup that will also see recipe and dieting advice lots stricken from the site. The decision, it says, is down to “a large number of misclassified items and eBay policy violations” that often lead to “issues that can be difficult to resolve.” Presumably a few angry customers unable to get a love spell working have caused eBay strife over the years. One seller, magickandmysticism, promises to “offer my services not just for the compensation, but for the experience of mystical co-creation shared between two people — that is something that never gets old.” With a sales pitch like that, all the terms and conditions in the world can’t protect some people from the disappointment that goes hand in hand with magickandmysticism’s curse turning out to be a dud.Among the items that will be taken down and prohibited from August 30, 2012, are “advice; spells; curses; hexing; conjuring; magic; prayers; blessing services; magic potions; healing sessions; work from home businesses and information; wholesale lists, and drop shop lists.”Potions and tarot readings will also take a hit, and a community of buyers is up in arms at the prospect. A petition, “Don’t ban our psychics on eBay” was published on August 11, 2012 and has so far gained 1,009 signatures. The premise of the petition is that eBay’s perception of what makes an “intangible,” and therefore unviable product, may not be the same for an entire community of people who regularly pick up charms and blessings on the site.“What is alarming now is that the blanket term of ‘intangible item’ is being used to ban actual items,” the petition organizer says in a letter. “What concerns me is your purposed selective enforcement of what you (eBay) terms ‘intangible’. It seems you only have targeted those sellers who offer items of a certain occult or esoteric nature — for instance, pagan beliefs and witchcraft.”Though the petition does not use the word discrimination, it does point out that the sales of items reflecting other belief systems that remain unproven are not in dispute. Most significantly, it singles out “rosaries, crucifixes or religious medals, all of which have perceived ‘intangible’ abilities and energies associated with them,” and goes on to say that feng shui items, such as crystals, and magnetic therapy jewellery could also be seen to offer “intangible benefits”.eBay spokeswoman Johnna Hoff has cleared this matter up, however, explaining that “items that have a tangible value for the item itself and may also be used in metaphysical rites and practices (for instance, jewellery, crystals, incense, candles, and books) are allowed in most cases”.eBay’s subjectivity, the petition goes on however, also relates to monetary value. According to the auction house, prices related to the items in question cannot reflect added value. Though as the petition points out, “the market determines the price and people will pay the price or they won’t” — value is entirely subjective, and always has been. It’s how eBay works.According to a brief scan of the seller feedback results on eBay, it seems quite a few customers are happy with their products. Magickandmysticism, who is currently selling “Vampire Mistress Sex Spirit… Haunted Succubus Nymph Wife Girlfriend… Julianna the Vampire Mistress” for a bargain £80 (plus free shipping), has 100 percent positive feedback from nearly 100 buyers with one noting, “incredible energy output from spirit. Palpable. Unbelievably Awesome. Thank you,” and another excitedly proclaiming, “Instead of a Pokémon collector. I feel like I’m a spirit collector”. For the skeptics out there, seductive succubus’ aside, zero negative feedback looks a little suspect on eBay. And when it comes to selling said succubus nymph on eBay, we’re sure everyone is thinking the same thing — the auction house should never have been enabling slavery and prostitution in the first place.Sellers might be able to get around the ban by adapting the wording used to promote items or, alternatively, they could head to Craigslist where professor Kaye is free to continue selling lost love spells.In the meantime, we will be pondering eBay forum poster stinky*felix’s philosophical question: “I think it is presumptuous to state that anyone whose communication may transcend our abilities is a liar. After all, wouldn’t Moses and the prophets fit in that category?”
Posted by Mercury at 5:19 PM