Another snap from Curiosity and a David Bowie tune 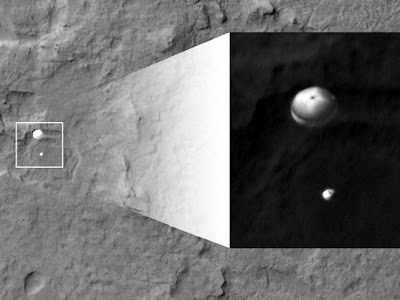 An image from the High Resolution Imaging Science Experiment (HiRISE) camera aboard NASA's Mars Reconnaissance orbiter captured the Curiosity rover still connected to its 51-foot-wide (almost 16 meter) parachute as it descended towards its landing site at Gale Crater. 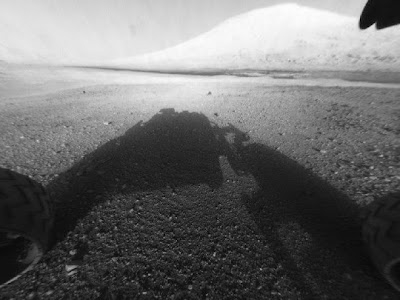 David Bowie made several references to Mars over the course of his storied career. "Life on Mars," one of his most enduring and memorable ballads, was released in 1971 on the album Hunky Dory. Bowie made his epic transformation into Ziggy Stardust a year later, in the classic 1972 album The Rise and Fall of Ziggy Stardust and the Spiders from Mars.

Wikipedia on the lyrics...
BBC Radio has described "Life on Mars?" as having "one of the strangest lyrics ever" consisting of a "slew of surreal images" like a Salvador Dalí painting. The line "Look at those cavemen go" is a reference to the song "Alley Oop", a one-off hit in 1960 for American doo-wop band The Hollywood Argyles.Bowie, at the time of Hunky Dory's release in 1971, summed up the song as "A sensitive young girl's reaction to the media". In 1997 he added "I think she finds herself disappointed with reality ... that although she's living in the doldrums of reality, she's being told that there's a far greater life somewhere, and she's bitterly disappointed that she doesn't have access to it".