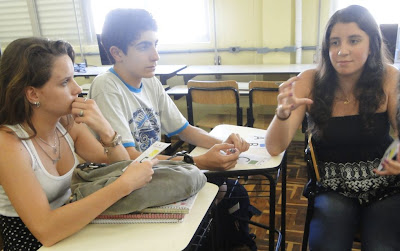 The world has changed dramatically in recent decades but many argue that the university system has not kept pace. As another academic year begins, if you peek into any introductory college science course you're likely to find the same scene as you would have twenty years ago: An instructor writing equations on the blackboard while a lecture hall full of students take notes.

Why is college science instruction so slow to change when we know that there are better methods? Focused research and development has resulted in a variety of effective strategies for teaching science. These techniques typically actively engage students through discussions with classmates, posing and answering questions, and making sense of science concepts. Physics, among all the sciences, has been noted for leading the way in developing such research-based teaching strategies. For example, in one such technique called Peer Instruction the teacher poses challenging questions to students. Students discuss the question with their neighbors, use an electronic device called a "clicker" to vote on the answer, and then the instructor facilitates a whole-class discussion about the question using the real-time feedback from the students' electronic votes.

However, education reformers know very little about just how teaching techniques like Peer Instruction are being used by instructors. A recently released study sheds new light on this critical area. The study, authored by Charles Henderson and Magdalena Niewiadomska-Bugaj of Western Michigan University and Melissa Dancy of the University of Colorado at Boulder, was published in Physical Review Special Topics: Physics Education Research on July 31.

"Nobody had ever done a study like this," said Dr. Henderson. While other researchers have looked at whether faculty do or don't use research-based techniques, Henderson and his colleagues were trying to figure out what types of faculty tend to try these techniques, and whether they keep using them over time.

To accomplish this, the authors used results from a national web survey of 722 physics faculty who had taught introductory physics in the previous two years. Faculty gave information about their background (such as rank, type of institution, gender, and number of research publications). Then, faculty read through a comprehensive set of 24 research-based instructional techniques in physics and indicated whether they had heard of the technique, whether they'd used it, and whether they were still using it. This provided information about where each faculty member stood in the process of choosing whether to use a new teaching approach.

The authors' first finding was that most physics faculty (88% of survey participants) know about at least one of these instructional techniques, and most faculty (72% of participants) had tried at least one. However, faculty who chose to respond to the survey may be more likely to use such techniques, so these numbers may over-estimate actual nationwide numbers. Despite this limitation, it does appear that the hard work to disseminate these materials and techniques has indeed paid off, and the word is out.

But the clincher came when the researchers looked at discontinuation– about 1/3 of faculty who try one of these strategies stop using it.

"Most faculty actually know about these things, a lot of people try these things," said Henderson, "but the biggest loss is this discontinuation after trying. That's an important finding."

Myles Boylan, program officer at the National Science Foundation, agrees. Boylan says that this discontinuation is probably "the most dismaying" part of the study. "It is, however, largely reflected in the experiences that other groups have had around the country," he said. "There are even examples in the past of whole departments trying out new teaching practices for an introductory course and the whole department backing off when the students complain." While dropping the use of a teaching technique, for whatever reason, is well-known in various science disciplines, the detailed data in the current study is unprecedented, said Boylan.

The researchers then used a statistical model that allowed them to examine the effects of any one aspect of instructors' backgrounds on their use of teaching techniques, while controlling for the effects of other background variables.

They found that if an instructor attended a particular set of national workshops for new faculty in physics, they were more likely to know about and try a research-based method. However, these faculty were no more likely to continue to use that method over time. The same was true of other ways that faculty used to gather information, such as attending talks or workshops or reading about teaching. Workshops and articles create motivation and awareness, but do not support faculty in continued use of a technique.

"I'm not surprised that about a third of the faculty have tried one of these methods and then dropped out from using it," said Boylan, "because they probably experienced some real bumps along the road and didn't know how to deal with that."

Additionally, many assumptions about what might keep faculty from using educational innovations were not borne out by this study. A common idea is that older faculty are less innovative and, if we wait for older faculty to retire, then educational change will naturally follow. However, age (as measured by rank and years of teaching experience) was not correlated with use of instructional techniques, and it also didn't matter if an instructor was in a teaching-oriented job, what type of institution he/she taught at, the size of the classes they teach, or if they were highly productive researchers. So, one can't assume that more senior faculty, those more engaged in research, or those teaching large classes can't or won't use research-based teaching techniques.

However, some of these variables did come into play when considering whether faculty used more than 3 such research-based teaching techniques. Such "high" users tended to publish fewer research articles and teach smaller classes. Female faculty were also more likely to know about, and be high users of, research-based strategies.

These results suggest that, instead of focusing so much effort on getting instructors to try a teaching technique for the first time it may be more productive to work on helping instructors use such techniques effectively over the longer term.

"Our model of how to bring about [educational] reform is flawed," says Dancy. "Faculty aren't uncaring research-focused people who don't want to try things or don't want to change… they do, but they need more help and support to do it and more acknowledgement that it's not that easy. So to me the biggest lesson in that is that we need to be providing more ongoing support during the implementation phase, because that's where we're losing people."

Peer instruction versus class-wide discussion in large …
Posted by Mercury at 7:35 AM