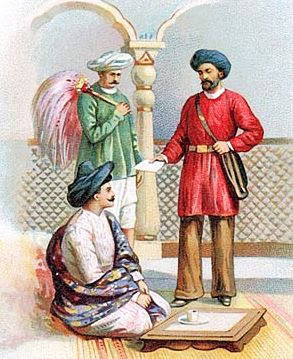 It is said that as many days as there are in the whole journey, so many are the men and horses that stand along the road, each horse and man at the interval of a day’s journey; and these are stayed neither by snow nor rain nor heat nor darkness from accomplishing their appointed course with all speed.—Herodotus, Histories.

A bag carrying diplomatic mail from India has been found on Mont Blanc in the French Alps, close to where an Air India plane crashed 46 years ago.

The jute bag was recovered by a mountain rescue worker and his neighbour after some tourists spotted it on a glacier last week.

The Indian embassy in Paris told the AFP news agency that it would begin efforts to retrieve the bag.

The Air India plane flying from Mumbai to New York crashed in January 1966.

The bag recovered from the glacier has markings saying "Diplomatic mail" and "Ministry of External Affairs", as the foreign ministry is called in India.

"Some tourists came and told us they had seen something shining on the Bossons glacier," rescue worker Arnaud Christmann told AFP.
'A dump'

"We found pieces of the cabin, a shoe, cables - it's a real dump up there!"

Mr Christmann said the diplomatic bag was "sitting as if someone had just placed it there".

"We were hoping for diamonds or at least a few gold ingots. Instead we got some soaking wet mail and Indian newspapers," he said.

"It's not the sort of thing you find very often in the mountains - the mail's going to arrive 46 years late."

The bag has been handed over to the police in the town of Chamonix at the base of the mountain.

The Indian embassy in Paris said on Wednesday that it had not been informed of the discovery but officials would be looking into it to recover the bag.
Posted by Mercury at 6:21 AM