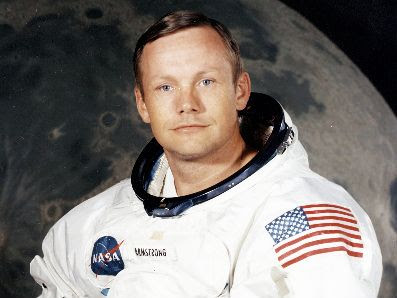 The family of Neil Armstrong, the first man to walk on the moon, says he has died at age 82.A statement from the family says he died following complications resulting from cardiovascular procedures. It doesn't say where he died.Armstrong commanded the Apollo 11 spacecraft that landed on the moon July 20, 1969. He radioed back to Earth the historic news of “one giant leap for mankind.”Armstrong and fellow astronaut Edwin “Buzz” Aldrin spent nearly three hours walking on the moon, collecting samples, conducting experiments and taking photographs. In all, 12 Americans walked on the moon from 1969 to 1972.

The following is a statement from NASA Administrator Charles Bolden regarding the death of former test pilot and NASA astronaut Neil Armstrong. He was 82.

On behalf of the entire NASA family, I would like to express my deepest condolences to Carol and the rest of Armstrong family on the passing of Neil Armstrong. As long as there are history books, Neil Armstrong will be included in them, remembered for taking humankind's first small step on a world beyond our own.

Besides being one of America's greatest explorers, Neil carried himself with a grace and humility that was an example to us all. When President Kennedy challenged the nation to send a human to the moon, Neil Armstrong accepted without reservation.

As we enter this next era of space exploration, we do so standing on the shoulders of Neil Armstrong. We mourn the passing of a friend, fellow astronaut and true American hero.

Neil Armstrong's walk on the moon on July 20, 1969, marked the high point of US manned space flight, but the commander of the Apollo 11 mission was wary of the celebrity that came with it.

Neil Armstrong, who died today following heart surgery, never wanted to be remembered simply as the first man on the moon.

Once credited with the most recognized name in the world,  Armstrong avoided the outsized celebrity of the early NASA astronauts, whose storied missions not only advanced a US profile in space but also helped define the Cold War struggle with Soviet Union, whose 1957 Sputnik launch stunned the world.

The images of the first moon walk with Buzz Aldrin on July 20, 1969, marked the high point of the US manned space program. His signature, and often misquoted, line – "That's one small step for [a] man, one giant leap for mankind" – soared to iconic status.

But Armstrong, who also flew combat missions in Korea, brushed aside all talk of hero status, at least for himself.

"We all like to be recognized not for one piece of fireworks but for the ledger of our daily work," he said in a 2007 interview with "60 Minutes." As for all the celebrity: "I don't deserve it," he said.

After commanding the Apollo 11 mission, Armstrong took a desk job at NASA, then taught engineering at the University of Cincinnati, served on several corporate boards, and worked out of his farm in southwest Ohio. He said he regretted not spending the time he wanted to with his family.

"I am, and ever will be, a white socks, pocket protector, nerdy engineer," he said in a rare public appearance in February 2000, cited by the Associated Press. "And I take a substantial amount of pride in the accomplishments of my profession."

He also regretted that US space program did not make more progress than it did. "I fully expected that by the end of the century we would have achieved substantially more than we did," he told "60 Minutes."  The end of the Cold War also marked the end of the drive for space dominance, he said. "When we lost the competition, we lost the public will to continue."

In 2010, he came out of retirement to make a case before the US Congress to restore funding and a vision for the US space program and a workforce he described as "confused and disconsolate" by the termination of the 30-year space shuttle program, layoffs of thousands of aerospace workers, and the absence of a new US space strategy.

Public policy must be guided by the recognition that we live in a technologically driven world, he told a House panel. "Our choices are to lead, try to keep up, or get out of the way" he said. "A lead once lost is very difficult to regain."

"Neil Armstrong understood that we should reach beyond the stars," said Sen. Bill Nelson (D) of Florida, a former NASA shuttle astronaut, in a statement. "His 'one giant leap for mankind' was taken by a giant of a man."

House Speaker John Boehner (R) of Ohio, who also calls Cincinnati his home town, said of Armstrong: "A true hero has returned to the Heavens to which he once flew. Neil Armstrong blazed trails not just for America, but for all of mankind."

"Ohio has lost one of her proudest sons," he said in a statement. "Humanity has gained a legend."


"Neil Armstrong, first person to walk on moon, dies at 82"

Neil Armstrong's 'giant leap for mankind' as he set foot on the lunar surface in 1969 climaxed a monumental achievement in human history. Despite his fame, the former fighter pilot shrank from the spotlight and called himself a 'nerdy engineer.'

[Malnic, a former Times staff writer, prepared a draft of this story before he died in 2010.]


"Inspired Mankind With One Small Step"

Neil Armstrong, the first man to walk on the moon, died Saturday.He was 82 and lived in Cincinnati. His death was announced by his family in a statement, but it did not say where Mr. Armstrong died.Mr. Armstrong underwent bypass surgery earlier this month to relieve blocked coronary arteries, according to family and friends. His recovery had been going well, according to those who spoke with him after the surgery, and his death came as a surprise to many close to him, including his fellow Apollo astronauts.As commander of the Apollo 11 mission, Mr. Armstrong, with one short sentence on July 20, 1969, became a hero to the millions of people watching back on earth.The words he spoke upon stepping onto the lunar surface — “That’s one small step for man, one giant leap for mankind” — were beamed live into homes around the world, captivating viewers and immediately and indelibly becoming a symbol of America’s resolve and ingenuity in its race against the Soviet Union for supremacy in space.It was a singular achievement for humanity and the culmination of a goal that President John F. Kennedy had set eight years earlier with his bold statement: “I believe this nation should commit itself to achieving the goal, before the decade is out, of landing a man on the moon and returning him safely to Earth.”Mr. Armstrong’s family, in a statement, praised him as a “loving husband, father, grandfather, brother and friend.”“Neil Armstrong was also a reluctant American hero who always believed he was just doing his job,” the family said. “He served his nation proudly, as a navy fighter pilot, test pilot and astronaut.”Neil Alden Armstrong was born Aug. 5, 1930, near Wapakoneta, Ohio, and he would maintain a connection with his home state his entire life.In 1947, Mr. Armstrong began studying aeronautical engineering at Purdue University on a Navy scholarship, according to his official biography. His studies were interrupted in 1949 when he was called to serve in the Korean War, where he flew 78 combat missions. He left the service in 1952, and returned to college to finish his degree. He later earned a master’s degree in aerospace engineering from the University of Southern California.In 1955, he joined the National Advisory Committee for Aeronautics, which later became the National Aeronautics and Space Administration, and worked as an engineer, test pilot and administrator. As a test pilot, he flew some of the most innovative and dangerous aircraft ever developed, more than 200 different models. Perhaps the best known of these was the X-15, which reached speeds of 4,000 m.p.h., according to his biography on the NASA Web site.He became an astronaut in 1962 and was the command pilot for the Gemini 8 mission in 1966, when he performed the first successful docking of two vehicles in space.Three year later, Mr. Armstrong was 38 years old when he piloted the lunar module to the surface of the moon, a delicate operation that required precise calculations to ensure that the vehicle landed unscathed.Along with his co-pilot, Col. Edwin E. Aldrin Jr. of the Air Force, the pair landed in a rock-strewn plain near the southwestern shore of the Sea of Tranquillity. The third astronaut on the mission, Michael Collins, remained in the command ship circling the moon.The world breathed a collective sigh when Mr. Armstrong was heard telling mission control room, “Houston, Tranquillity Base here. The Eagle has landed.”“Roger, Tranquillity,” mission control replied. “We copy you on the ground. You’ve got a bunch of guys about to turn blue. We’re breathing again. Thanks a lot.”About six and a half hours after landing, Mr. Armstrong opened the hatch on the four-legged lunar module, slowly made his way down the ladder and planted the first human footprint on the lunar crust. A crater near the site of the landing was later named in his honor.After leaving the space program, Mr. Armstrong was careful to do nothing to tarnish that image or achievement. Though he traveled and gave speeches — like in October 2007, when he dedicated the new Neil Armstrong Hall of Engineering at Purdue — he rarely gave interviews and avoided the spotlight.“He remained an advocate of aviation and exploration throughout his life and never lost his boyhood wonder of these pursuits,” his family said in the statement.He later found success in both business and academia.Mr. Armstrong married Carol Knight in 1994, and the couple lived in Indian Hill, a Cincinnati suburb. In addition to his wife, he is survived by two sons, Eric and Mark, from his first marriage to Janet Shearon. He also had a daughter with Ms. Shearon in 1959, but the girl, Karen, died of an inoperable brain tumor in 1962.Almost as soon as the news of his death was announced, there was an outpouring of well wishes and fond memorials on Web sites and social media, a reflection of the extraordinary public acclaim that came to a very private man.“As much as Neil cherished his privacy, he always appreciated the expressions of good will from people around the world and from all walks of life,” his family said. “While we mourn the loss of a very good man, we also celebrate his remarkable life and hope that it serves as an example to young people around the world to work hard to make their dreams come true, to be willing to explore and push the limits, and to selflessly serve a cause greater than themselves.”


Statement by the President on the Passing of Neil Armstrong

Michelle and I were deeply saddened to hear about the passing of Neil Armstrong. Neil was among the greatest of American heroes - not just of his time, but of all time.  When he and his fellow crew members lifted off aboard Apollo 11 in 1969, they carried with them the aspirations of an entire nation.  They set out to show the world that the American spirit can see beyond what seems unimaginable - that with enough drive and ingenuity, anything is possible. And when Neil stepped foot on the surface of the moon for the first time, he delivered a moment of human achievement that will never be forgotten. Today, Neil's spirit of discovery lives on in all the men and women who have devoted their lives to exploring the unknown - including those who are ensuring that we reach higher and go further in space. That legacy will endure - sparked by a man who taught us the enormous power of one small step.