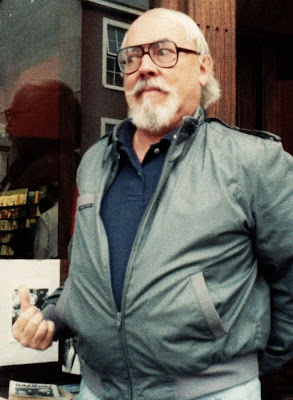 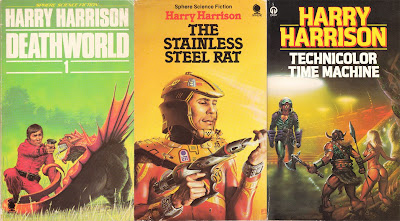 The New York Times
“Incompetent, unlettered, unskilled writers sell to unexacting editors. All of this is going completely unnoticed by an incompetent readership.”So wrote Harry Harrison in a 1990 essay that described science fiction, the genre in which he wrote more than 60 novels, as “rubbish.” Some critics thought his work helped prove the point. Charles Platt, writing in The Washington Post in 1984, said that Mr. Harrison was better at “evoking the personalities of lizards than of people.”After long success in the field he questioned, Mr. Harrison died in southern England on Wednesday at 87, according to an announcement on his Web site.Flights of fancy were Harrison’s stock in trade. A coal-fired flying boat? A submarine to Mars? No problem. He imagined taking a time machine to the future and finding no one there. In his 1966 novel “Make Room! Make Room!,” which was translated to the screen as “Soylent Green” in 1973, he painted a dystopian nightmare of too many people scrambling for too few resources.For his 1984 book, “West of Eden,” Mr. Harrison did research for two years — interviewing biologists, anthropologists, engineers, linguists and philosophers. This is the writer who conjured up Slippery Jim DiGriz, a k a the Stainless Steel Rat, a raffish con man who starred in a dozen books over a half-century. DiGriz steals from humans, aliens and robots alike — though only if they have insurance coverage.But Mr. Harrison was best known for subverting his own genre. In 1965 he wrote “Bill the Galactic Hero” to satirize the militaristic perspective he saw in “Starship Troopers” (1959), a book by the science-fiction giant Robert A. Heinlein. The St. James Guide to Science Fiction Writers called Mr. Harrison’s book “a deeply felt antiwar statement.” He went on to write six sequels.Mr. Harrison employed an escapist form to make serious points. “Make Room!” sketched a desperate, overpopulated world running out of resources. Paul R. Ehrlich, a founder of the Zero Population Growth movement, wrote the introduction to the paperback edition. “Soylent Green,” directed by Richard Fleischer and starring Charlton Heston and Edward G. Robinson, imagined that the crackers sustaining the population were made from the mortal remains of fellow citizens. Mr. Harrison was appalled at the film’s addition of cannibalism to the plot, not least because humans put on meat too slowly. The crackers in the book were made from soybeans and lentils.In addition to averaging a novel a year, Mr. Harrison wrote about 100 short stories and a science-fiction textbook; edited more than 30 anthologies and a science-fiction literary journal; and financed a prize for writers who had advanced the genre. His work was translated into more than 30 languages. He became a cult hero in Russia.He was elected to the Science Fiction and Fantasy Hall of Fame in 2004, and five years later the Science Fiction Writers of America gave him its Damon Knight Memorial Grand Master Award.He was born Henry Maxwell Dempsey on March 12, 1925, in Stamford, Conn. His father, Henry, changed their last name to Harrison soon after Harry’s birth. Harry did not find out until he applied for a passport, at 30, that his last name was still Dempsey. He then changed it to Harrison, except when using Dempsey as a pseudonym.After finishing high school he was drafted into the Army, where he repaired gunsight computers and developed a hatred of the military that inspired much of his later writing. He studied art in New York, then worked as an illustrator and writer for pulp magazines. He wrote scripts for comic strips, including “Flash Gordon.” In the 1950s he began writing science fiction full time.For years Mr. Harrison, who found inspiration in the sardonic humor of Voltaire, could not find a publisher for an early story he wrote, “The Streets of Ashkelon,” about an atheist who tries to protect the inhabitants of an alien world from the influence of a Christian missionary. It was eventually anthologized in the United States and translated into Swedish, Italian, Russian, Hungarian and French.In another story, the Stainless Steel Rat’s homicidal wife, Angelina, gave birth to twins who ended up marrying the same woman — after she had herself duplicated, becoming two identical women sharing one mind. Mr. Harrison’s own wife, of 48 years, the former Joan Merkler, died in 2002. His survivors include his children, Todd and Moira.The Harrison family moved often and far, living in Mexico, Ireland, Italy, Denmark, the United States and finally England. But Mr. Harrison preferred a world with no boundaries, and for that reason championed Esperanto, the artificial international language. He claimed, apparently with no dispute, to have written the only science-fiction story in Esperanto.

Harry Harrison [Wikipedia]
Posted by Mercury at 5:31 AM