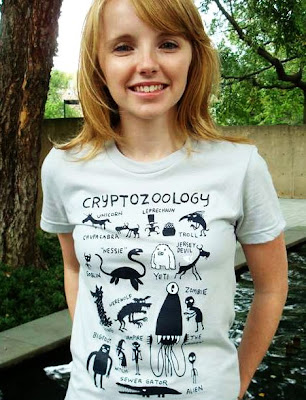 I knew that there was a name for lovers of Nessie, Big Foot and the like. There is even a Wikipedia entry.
"Cryptozoology...refers to the search for animals whose existence has not been proven. This includes looking for living examples of animals that are considered extinct, such as dinosaurs; animals whose existence lacks physical evidence but which appear in myths, legends, or are reported, such as Bigfoot and Chupacabra; and wild animals dramatically outside their normal geographic ranges, such as phantom cats or "ABCs" (an initialism commonly used by cryptozoologists that stands for Alien Big Cats).The animals cryptozoologists study are often referred to as cryptids, a term coined by John Wall in 1983.Cryptozoology is not a recognized branch of zoology or a discipline of science. It is an example of pseudoscience because it relies heavily upon anecdotal evidence, stories and alleged sightings."

And we have the following...

"Yetis in the lab: The search for mythical beasts"

Email ThisBlogThis!Share to TwitterShare to FacebookShare to Pinterest
Labels: Cryptozoology