Some thoughts by Bill Nye regarding creationism, evolution, and science 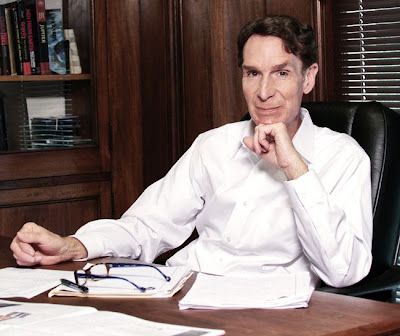 redOrbit
Americans like to celebrate their freedom to believe in anything they want, from paranormal activity to ancient aliens, but educational presenter Bill Nye said the belief in creationism should end with the current generation in a recent web video for Big Think.“So, once in a while I get people that really — or that claim — they don’t believe in evolution,” Nye said. “And my response generally is ‘Well, why not? Really, why not?’ Your world just becomes fantastically complicated when you don’t believe in evolution. I mean, here are these ancient dinosaur bones or fossils, here is radioactivity, here are distant stars that are just like our star but they’re at a different point in their lifecycle.”“The idea of deep time, of this billions of years, explains so much of the world around us” he added. “If you try to ignore that, your world view just becomes crazy, just untenable, itself inconsistent.”The crux of Nye’s argument lies in his implied purpose for speaking out—that Americans need to embrace science over belief for the sake of a better society.“We need scientifically literate voters and taxpayers for the future,” he said. “We need people that can — we need engineers that can build stuff, solve problems.”Nye began his message by saying that the United States is unique in its fairly mainstream opposition to evolution, a position held by mostly religious Christian conservatives.Creationism has a history as long as civilization itself, with many pre-Christian religions containing some type of origin story. These beliefs have often translated into tangible effects within a particular society. Ancient people have a well-documented history of constructing monuments and even fighting wars over religious beliefs that include some variation on Creationism.Even the modern day faithful have spent large sums of money in tribute to the book of Genesis. A 70,000 square foot museum in Petersburg, Ky attempts to bring “the pages of the Bible to life” as it depicts dinosaurs roaming along Eden’s rivers. The Creation Museum was established in 2007 to promote the message that all life was created 6,000 years ago in six days.Creationism and those dedicated to Genesis dedications aren’t restricted to North America either. A Dutch creationist, Johan Huibers, has built a 450-foot long replica of Noah’s Ark that took four years and three months to build. The ship was constructed without technical drawings, which led to delays in receiving permits and passing inspections.The latest web video by Bill Nye is not the first time the former mechanical engineer has dipped his toe into the waters where science and politics intersect. Nye railed against the media in July for what he believed was a lack of coverage on the issues of climate change.“The environment is a very important issue. I guess, if I understand this, it’s fallen by the wayside for a few months while we talk about the economy,” Nye told CNN, who he singled out for particularly poor coverage of the issue.A study by the left-wing media watchdog group Media Matters supported Nye’s assertion, claiming that CNN mentioned climate change less than Fox News during coverage of the July 2012 nationwide heat wave.

Famed TV scientist Bill Nye is slamming creationism in a new online video for Big Think titled "Creationism Is Not Appropriate For Children.""Denial of evolution is unique to the United States," Nye begins in a YouTube video posted on Thursday.  The video quickly picked up steam over the weekend and as of Monday morning had been viewed more than 1,100,000 times.Nye – a mechanical engineer and television personality best known for his program, "Bill Nye the Science Guy" – said the United States has great capital in scientific knowledge and "when you have a portion of the population that doesn't believe in it, it holds everyone back.""Your world becomes fantastically complicated if you don't believe in evolution," Nye said in the Web video.Creationists are a vast and varied group in the United States.  Most creationists believe in the account of the origins of the world as told in the Book of Genesis, the first book of the Bible.In the creation account, God creates Adam and Eve, the world, and everything in it in six days.For Christians who read the Genesis account literally, or authoritatively as they would say, the six days in the account are literal 24-hour periods and leave no room for evolution.  Young Earth creationists use this construct and biblical genealogies to determine the age of the Earth, and typically come up with 6,000 to 10,000 years.The Gallup Poll has been tracking Americans' views on creation and evolution for the past 30 years.  In June it released its latest findings, which showed 46% of Americans believed in creationism, 32% believed in evolution guided by God, and 15% believed in atheistic evolution.During the 30 years Gallup has conducted the survey, creationism has remained far and away the most popular answer, with 40% to 47% of Americans surveyed saying they believed that God created humans in their present form at one point within the past 10,000 years."The idea of deep time of billions of years explains so much of the world around us. If you try to ignore that, your worldview becomes crazy, untenable, itself inconsistent," Nye said in the video."I say to the grownups, if you want to deny evolution and live in your world, that's completely inconsistent with the world we observe, that's fine.  But don't make your kids do it.  Because we need them.  We need scientifically literate voters and taxpayers for the future.  We need engineers that can build stuff and solve problems," he said.Creationists' beliefs about the origins of the Earth are often a narrow focus, based in large part on religious beliefs, and while they reject evolution as "just one theory," they often embrace other fields of science and technology.In "The Genesis Flood," the 1961 book that in many ways help launch the Young Earth creationism movement in the United States, the authors write: “Our conclusions must unavoidably be colored by our Biblical presuppositions, and this we plainly acknowledge."  Their goal for the book was to harmonize the scientific evidence with the accounts in Genesis of creation and the flood.The idea of creationism has been scorned by the mainstream scientific community since shortly after Darwin introduced "The Origin of Species" in 1859.  By 1880, The American Naturalists, a science journal, reported nearly every major university in America was teaching evolution."In another couple centuries I'm sure that worldview won't even exist.  There's no evidence for it. So..." Nye ends his video.


Creationism Is Not Appropriate For Children

Here in TN, they have taken steps though new legislation to allow creationism back into the classroom. This law turns the clock back nearly 100 years here in the seemingly unprogressive South and is simply embarrassing. There is no argument against the Theory of Evolution other than that of religious doctrine. The Monkey Law only opens the door for fanatic Christianity to creep its way back into our classrooms. You can see my visual response as a Tennessean to this absurd law on my artist’s blog at http://dregstudiosart.blogspot.com/2012/04/pulpit-in-classroom-biblical-agenda-in.html with some evolutionary art and a little bit of simple logic.