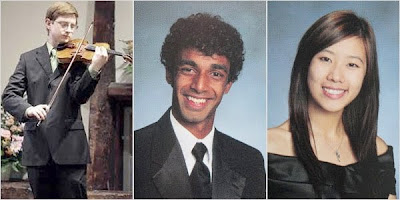 Tyler Clementi, left, is thought to have committed suicide, days after he was secretly filmed and broadcast on the Internet. Mr. Clementi’s roommate, Dharun Ravi, center, and another classmate, Molly Wei, have been charged in the case.
Super sensitivity or a cruel byproduct of technology and mischievous peers?

"Private Moment Made Public, Then a Fatal Jump"

The New York Times
It started with a Twitter message on Sept. 19: “Roommate asked for the room till midnight. I went into molly’s room and turned on my webcam. I saw him making out with a dude. Yay.”

That night, the authorities say, the Rutgers University student who sent the message used a camera in his dormitory room to stream the roommate’s intimate encounter live on the Internet.

And three days later, the roommate who had been surreptitiously broadcast — Tyler Clementi, an 18-year-old freshman and an accomplished violinist — jumped from the George Washington Bridge into the Hudson River in an apparent suicide.

The Sept. 22 death, details of which the authorities disclosed on Wednesday, was the latest by a young American that followed the online posting of hurtful material. The news came on the same day that Rutgers kicked off a two-year, campuswide project to teach the importance of civility, with special attention to the use and abuse of new technology.

Those who knew Mr. Clementi — on the Rutgers campus in Piscataway, N.J., at his North Jersey high school and in a community orchestra — were anguished by the circumstances surrounding his death, describing him as an intensely devoted musician who was sweet and shy.

“It’s really awful, especially in New York and in the 21st century,” said Arkady Leytush, artistic director of the Ridgewood Symphony Orchestra, where Mr. Clementi played since his freshman year in high school. “It’s so painful. He was very friendly and had very good potential.”

The Middlesex County prosecutor’s office said Mr. Clementi’s roommate, Dharun Ravi, 18, of Plainsboro, N.J., and another classmate, Molly Wei, 18, of Princeton Junction, N.J., had each been charged with two counts of invasion of privacy for using “the camera to view and transmit a live image” of Mr. Clementi. The most serious charges carry a maximum sentence of five years.

Mr. Ravi was charged with two additional counts of invasion of privacy for trying a similar live feed on the Internet on Sept. 21, the day before the suicide. A spokesman for the prosecutor’s office, James O’Neill, said the investigation was continuing, but he declined to “speculate on additional charges.”

Steven Goldstein, chairman of the gay rights group Garden State Equality, said Wednesday that he considered the death a hate crime. “We are sickened that anyone in our society, such as the students allegedly responsible for making the surreptitious video, might consider destroying others’ lives as a sport,” he said in a statement.

At the end of the inaugural event for the university’s “Project Civility” campaign on Wednesday, nearly 100 demonstrators gathered outside the student center, where the president spoke. They chanted, “Civility without safety — over our queer bodies!”

It is unclear what Mr. Clementi’s sexual orientation was; classmates say he mostly kept to himself. Danielle Birnbohm, a freshman who lived across the hall from him in Davidson Hall, said that when a counselor asked how many students had known Mr. Clementi, only 3 students out of 50 raised their hands.

But Mr. Clementi displayed a favorite quotation on his Facebook page, from the song “I’ll Never Fall in Love Again”: “What do you get when you kiss a guy? You get enough germs to catch pneumonia.”

And his roommate’s Twitter message makes plain that Mr. Ravi believed that Mr. Clementi was gay.

A later message from Mr. Ravi appeared to make reference to the second attempt to broadcast Mr. Clementi. “Anyone with iChat,” he wrote on Sept. 21, “I dare you to video chat me between the hours of 9:30 and 12. Yes, it’s happening again.”

Ms. Birnbohm said Mr. Ravi had said the initial broadcast was an accident — that he viewed the encounter after dialing his own computer from another room in the dorm. It was not immediately known how or when Mr. Clementi learned what his roommate had done. But Ms. Birnbohm said the episode quickly became the subject of gossip in the dormitory.

Mr. Clementi’s family issued a statement on Wednesday confirming the suicide and pledging cooperation with the criminal investigation. “Tyler was a fine young man, and a distinguished musician,” the statement read. “The family is heartbroken beyond words.”

The Star-Ledger of Newark reported that Mr. Clementi posted a note on his Facebook page the day of his death: “Jumping off the gw bridge sorry.” Friends and strangers have turned the page into a memorial.

The police said Wednesday night that they had found the body of a young man in the Hudson north of the bridge and were trying to identify it.

Officials at Ridgewood High School, where Mr. Clementi graduated in June, last week alerted parents of current students that his family had reported him missing and encouraged students to take advantage of counseling at the school.

The timing of the news was almost uncanny, coinciding with the start of “Project Civility” at Rutgers, the state university of New Jersey. Long in the planning, the campaign will involve panel discussions, lectures, workshops and other events to raise awareness about the importance of respect, compassion and courtesy in everyday interactions.

Events scheduled for this fall include a workshop for students and administrators on residential life on campus and a panel discussion titled “Uncivil Gadgets? Changing Technologies and Civil Behavior.”

Rutgers officials would not say whether the two suspects had been suspended. But in a statement late Wednesday, the university’s president, Richard L. McCormick, said, “If the charges are true, these actions gravely violate the university’s standards of decency and humanity.” At the kickoff event for the civility campaign, Mr. McCormick made an oblique reference to the case, saying, “It is more clear than ever that we need strongly to reassert our call for civility and responsibility for each other.”

Mr. Ravi was freed on $25,000 bail, and Ms. Wei was released on her own recognizance. The lawyer for Mr. Ravi, Steven D. Altman, declined to comment on the accusations. A phone message left at the offices of Ms. Wei’s lawyer was not returned.

Some students on the Busch campus in Piscataway seemed dazed by the turn of events, remembering their last glimpse of Mr. Clementi. Thomas Jung, 19, shared a music stand with Mr. Clementi in the Rutgers Symphony Orchestra.

On Wednesday afternoon, hours before Mr. Clementi’s death, the two rehearsed works by Berlioz and Beethoven. “He loved music,” Mr. Jung said. “He was very dedicated. I couldn’t tell if anything was wrong.”
Posted by Mercury at 5:15 AM

sad...and so typical of that age and something that will most likely haunt the rest of their lives. sad indeed...