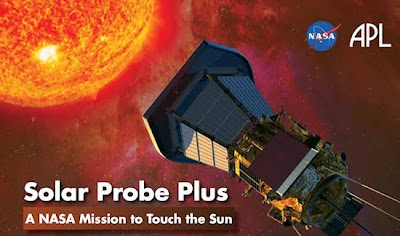 I wonder if this will affect Dr. Oliver Manuel's hypotheses?

An Iron Core For The Sun And More?

Slated to launch no later than 2018, the smart car-sized spacecraft will plunge directly into the atmosphere of the sun, aiming to solve some of the biggest mysteries of solar physics. Today's announcement means that researchers can begin building sensors for unprecedented in situ measurements of the solar system's innermost frontier.

"Solar Probe+ is going where no spacecraft has gone before," says Lika Guhathakurta, Solar Probe+ program scientist at NASA HQ. "For the first time, we'll be able to 'touch, taste and smell' the sun."

Last year, NASA invited top researchers around the world to submit proposals detailing possible science investigations for the pioneering spacecraft. Thirteen proposals were received and five have been selected:

--SWEAP, the Solar Wind Electrons Alphas and Protons Investigation: The most abundant particles in the solar wind are electrons, protons and helium ions. SWEAP will count these particles and measure their properties, even "sweeping up" some of them in a special Solar Probe Cup for direct analysis. The principal investigator is Justin C. Kasper of the Smithsonian Astrophysical Observatory in Cambridge, Mass.

--WISPR, the Wide-field Imager for Solar Probe Plus: WISPR is a telescope that will make 3D images of the sun's atmosphere similar to medical CAT scans. WISPR can actually see the solar wind, allowing it to image clouds and shock waves as they approach and pass the spacecraft. This telescope is an important complement to the spacecraft's in situ instruments, which sample the plasmas that WISPR images. The principal investigator is Russell Howard of the Naval Research Laboratory in Washington, DC.

--FIELDS, The Fields Investigation for Solar Probe Plus: This instrument will make direct measurements of electric and magnetic fields, radio emissions, and shock waves which course through the sun's atmospheric plasma. FIELDS also turns Solar Probe Plus into a giant dust detector, registering voltage signatures when specks of space dust hit the spacecraft’s antenna. The principal investigator is Stuart Bale of the University of California in Berkeley.

--ISIS, Integrated Science Investigation of the Sun: The ISIS EPI-Hi and EPI-Lo instruments will monitor electrons, protons and ions which are accelerated to high energies by shock waves in the sun's atmosphere. These are the very same particles that pose a threat to astronauts in space, disable satellites, and ionize Earth's upper atmosphere.

--Solar Probe+ Observatory Scientist: This was a proposal not for an instrument, but for a person. The principal investigator, Marco Velli, becomes the mission's Observatory Scientist. In the years ahead, he will become deeply familiar with the spacecraft and its construction, helping to ensure that adjacent in situ instruments do not interfere with one another as they sample the solar environment. He will also guide the mission's "big picture" science investigations after Solar Probe+ enters the sun's atmosphere.

"The sensors we've selected to ride aboard Solar Probe+ are designed to solve some of the biggest mysteries of solar physics," says Dick Fisher, head of NASA's Heliophysics Division in Washington DC.

Why is the sun's atmosphere is so much hotter than its surface? And what propels the solar wind?

"We've been struggling with these questions for decades," says Fisher. "Solar Probe+ should finally provide some answers."

Solar Probe+ will likely discover new mysteries, too, in a realm that no other spacecraft has dared enter. At closest approach, Solar Probe+ will be 7 million km or 9 solar radii from the sun. There, the spacecraft's carbon-composite heat shield must withstand temperatures as high as 2000 degrees C and survive blasts of radiation that would quickly disable other missions. From these near distances inside the sun’s atmosphere, the solar disk will loom 23 times wider than it does in the skies of Earth.

"What will we find there?" wonders Guhathakurta. "This is truly unexplored territory." By design, Solar Probe's winning instruments are sufficiently versatile to investigate many different kinds of phenomena. Whatever comes along--be it electric or magnetic, high- or low-energy, wavy or turbulent--they should be able to measure it.

"The possibilities for discovery," she says, "are off the charts."
Posted by Mercury at 6:02 PM